Kozun and McKernan Acquired for Cooper

INDEPENDENCE, Mo. – Chemistry is something, especially in sports, that occurs much better naturally rather than forcing it. If you walked into a Mavericks game, you would understand the definition of chemistry when you saw Mark Cooper and Jared VanWormer take the ice. 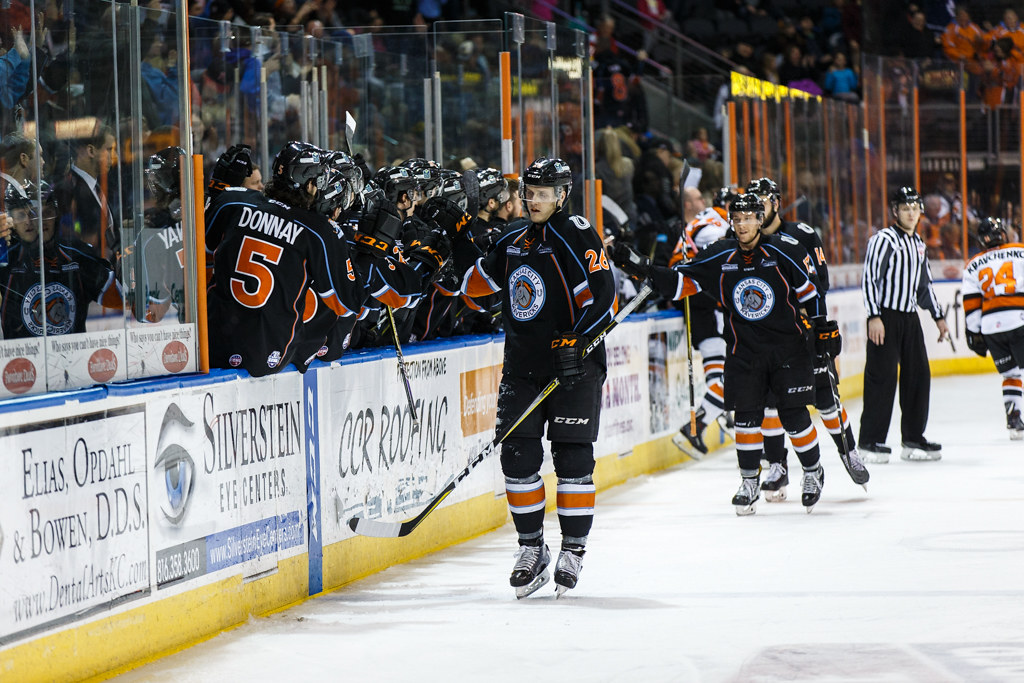 INDEPENDENCE, Mo. – Chemistry is something, especially in sports, that occurs much better naturally rather than forcing it. If you walked into a Mavericks game, you would understand the definition of chemistry when you saw Mark Cooper and Jared VanWormer take the ice. That is, if you didn’t miss them making moves in the AHL. Unfortunately, the team announced on August 19 that one half of the whole would be moving on, as Cooper has been traded to the South Carolina Stingrays. In return, Kansas City gets the rights to Tad Kozun and Kevin McKernan.
Cooper spent two seasons with Kansas City coming just two games shy of 100 in a Mavericks sweater. Last season, he was loaned to the San Antonio Rampage for 25 games where he put up two goals and five assists. His contributions for the Mavericks last season included 13 goals and 24 assists.
If there is one thing Cooper does well, it is manufacture points. He also showed talent in overtime on many occasions last season, scoring back-to-back OT goals in a single weekend (Nov. 2 versus Wichita & Nov. 3 against Utah). Throughout his career, he has played 37 games in the AHL, 152 in the ECHL, and 157 in the NCAA. While it is disappointing to see him go, it is worth looking into what type of players will be replacing the 27-year-old forward.
Kozun is a 26-year-old forward from Nipawin, Saskatchewan that shows production capabilities of his own. The upcoming season will be his third in the ECHL. Last season with the South Carolina Stingrays, he scored 18 goals and assisted on 32 for a total of 50 points. He was also tagged for 109 penalty minutes. He has played in six different leagues in his career so far, including the NCAA where he was named to the WCHA All-American team while he was playing for the University of Alaska Anchorage. He, like Cooper, also wore an “A” on his jersey his senior year of university (Cooper was an alternate captain for Bowling Green in 2015-16). The left winger could prove to be a strong replacement that finds a way to fit in the top couple lines of the Mavericks this upcoming season.
McKernan brings depth to the blue line as a right-handed defenseman. McKernan played collegiately for Quinnipac University in 138 games. He has stepped into the ECHL within the last two years, with this past year on the Stingrays being his first complete season in the league. He has played a total of 69 games, registering 28 points in 60 games in 2018-19. McKernan has played in six different leagues at this point in his career, and in the ECHL alone, he averages 0.41 points per game.
While trades happen and players come and go, it’s easy to get upset when fan favorites move on to new teams. However, the orange army definitely shows their appreciation for their players past and present, and will welcome this new pair of players with open arms. The Mavericks open the regular season on October 11 where they will head to the BOK Center to take on the Tulsa Oilers.
Statistics provided by www.eliteprospects.com. Follow Paige Siewert on Twitter (@SinBinMavs) for all your KC Mavericks news and updates, and check out The Sin Bin’s ECHL Transactions page to stay up-to-date on all the offseason trades and signing announcements!

Page Siewert covers the Stockton Heat for The Sin Bin. Follow and interact with her on Twitter @SinBinHeat.