INDIANAPOLIS – The Indy Fuel looked to rebound from a tough 5-3 loss in Fort Wayne  in a matchup against the Central Division-leading Toledo Walleye. 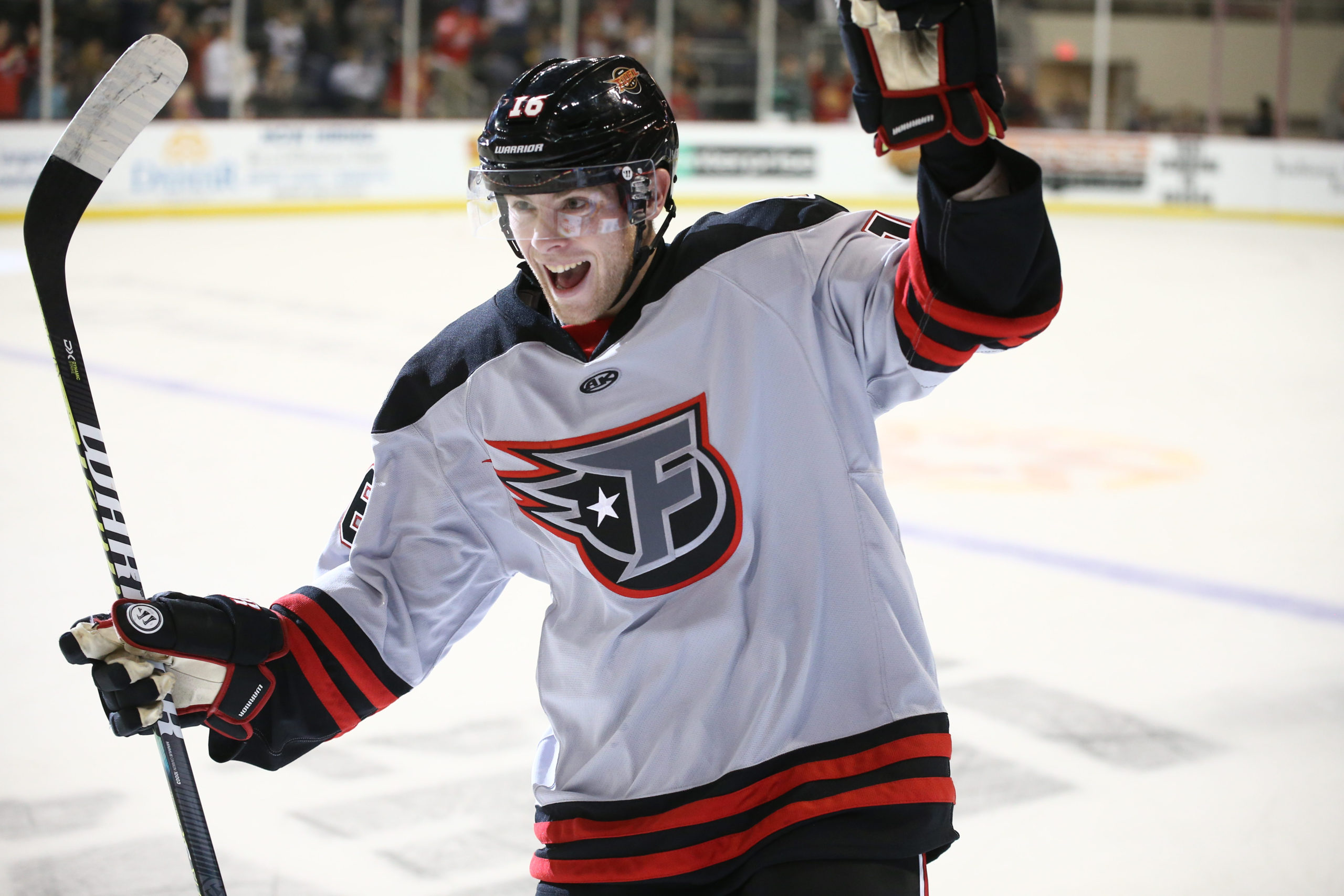 INDIANAPOLIS – The Indy Fuel looked to rebound from a tough 5-3 loss in Fort Wayne  in a matchup against the Central Division-leading Toledo Walleye. Charles Williams got the nod in goal for his fifth start of the season for Indy. At the other end, Pat Nagle got his eighth start of the season for the Walleye and was 6-0-1-0 entering the night.
The game got underway very quickly, as Alex Krushelnyski converted on a defensive zone turnover by Toledo and put the Fuel up 1-0 just 18 seconds into the game. Krushelnyski’s goal continued his season-long point streak, as he now has points in all eight Indy games this season.

“It’s fun to play with those guys,” Krushelnyski said when asked about what has contributed to the early season success with forwards Mathew Thompson and Spencer Watson. “They’re point per game players too. When you put three guys like that on one line, it flows naturally. They’re so smart and they both work hard. It’s fun. It’s a good group of guys to be on the ice with.”

The Fuel continued to keep their foot on the gas pedal throughout the first period, as Watson tallied his sixth goal of the season and continued his season-long point streak as well. Krushelnyski and Keoni Texeira were credited with assists on the goal.

With just 37 seconds remaining in the opening frame, Joe Sullivan sniped the puck past Nagle to give himself his first goal as a member of the Fuel in his first game with Indy.

The scoring for the Fuel continued into the second period, as Graham Knott tallied his second goal of the year. A stretch feed from Karl El-Mir sent Knott on a breakaway and the 22-year-old put the puck five-hole on Nagle.

Just over a minute later, Toledo responded with their first goal of the game from Josh Kestner, as he ripped a one-timer from the left circle on an odd-man rush over the shoulder of Williams. That was Kestner’s eighth point in nine games for the Walleye this year.
A scrappy second period led to a scrappier third period that saw Texeira and TJ Hensick engage in a fight after the whistle. About a minute and a half after the fight, Walleye and former NHL defenseman Steve Oleksy was ejected following his match penalty for spearing Fuel captain Thompson in the groin in front of the net. Thompson was injured on the play, but he returned later in the third period.

“Probably not too much,” Fuel head coach Doug Christiansen said when asked about what was said to the guys on the bench during the penalty-filled third period. “I was more concerned about the lack of effectiveness of our power play for a few minutes there. I think it was a situation where we changed a couple pieces because of injuries but we also wanted to put out a second defenseman. I thought we lost a little bit of momentum there but the guys battled and we made a couple of really smart plays in the last ten minutes and that really helped us get the win.”

“I think both teams want a redo on their power plays,” Christiansen said. “Overall, I think that we did a really good job. Our power play has been fantastic all year. I thought we created a couple of chances that we just didn’t bury when we had those opportunities. I thought the penalty kill did a nice job tonight. Toledo’s obviously a high-powered offensive team, but so are we. We’ll get back at it tomorrow and get better.”

Toledo cut the Fuel lead in half at 4-2 with 2:04 remaining in regulation, as Tyler Spezia buried his fourth goal of the year from Kestner and Josh Winquist.
The Fuel would hang on, though, to finish the game with two points and a 4-2 win over their Central Division rivals from Toledo.

The Fuel remain at Indiana Farmers Coliseum for the second game of a back-to-back at home as they take on the Cincinnati Cyclones on Saturday, November 9 at 6:05 PM ET.
Be sure to give a follow to Evan on Twitter for all the latest Indy Fuel news and notes, plus live in-game tweets from the Fuel’s home games!