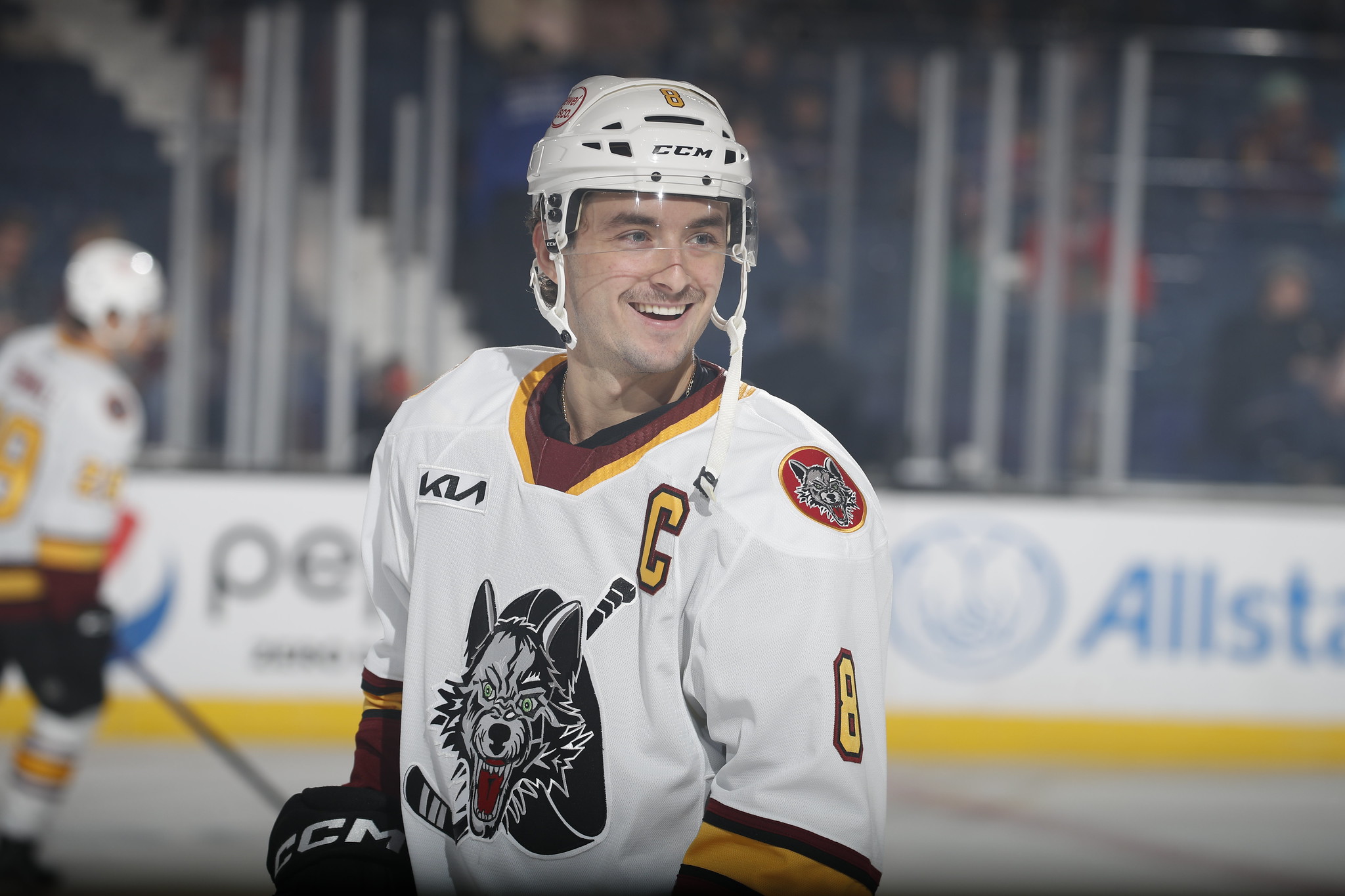 Lajoie Growing as a Leader in Wolves’ Locker Room

Since joining the Wolves in 2021, Max Lajoie has been all smiles. (Photo Courtesy: Dale Woltman)

Lajoie Growing as a Leader in Wolves’ Locker Room

CHICAGO, Ill. – Sunday afternoon in Rosemont, the Chicago Wolves were scheduled for the second game of a weekend homestand with a notable omission from the lineup – Captain Max Lajoie. With the Carolina Hurricanes – Chicago’s parent organization – in action the following evening just down the road and the Hurricanes’ coaching staff in attendance, the speculation was immediate. It wasn’t a secret for long as Carolina soon announced Lajoie’s call-up for his season debut in the NHL.

Since joining the Carolina organization in January of 2021, Lajoie has established himself as a sturdy, dependable defender that conducts himself with poise in all three zones. Most notably, last season Lajoie helped anchor the Wolves’ second defensive pairing and top penalty kill unit that dominated postseason play en route to a Calder Cup Championship.

It was only fitting that, when Lajoie arrived to the Carolina lineup for Monday’s matchup with the Blackhawks, he was paired up with the other half of that unit: Jalen Chatfield – a regular in the Hurricanes’ lineup after spending nearly all of last season with Lajoie and the Wolves. The familiarity with his former partner helped Lajoie to succeed in the NHL.

“It was great. Last year we had a great time, he’s a great defenseman and we read off each other so well. He’s good defensively so it’s nice to have someone that I can trust and already have chemistry with.”

Together with the defensive pairing, five players who won the Calder Cup with Chicago last summer made their way onto the Carolina roster. Stefan Noesen, who led the American League in goal scoring last season, earned a roster spot with Carolina for the season. Jack Drury and Pyotr Kochetkov also slotted in the lineup as a result of injuries to the parent club.

With the help of the Wolves’ graduates, Carolina defeated the Chicago Blackhawks by the final of 3-0 for Kochetkov’s first shutout in the NHL. Lajoie was the first one to congratulate the young goaltender when the final horn blew in the United Center.

“It was pretty impressive and it was really awesome for him. We get along really well, we like to joke around on the ice so it was pretty cool to be the first guy to congratulate him on the ice. Super happy for him.”

Back in the Saddle

Unfortunately for Lajoie, this stint in the NHL would be a brief one for him. On Tuesday, the Hurricanes assigned the defenseman back to the Wolves before returning to Raleigh. The message from Rod Brind’Amour and the coaching staff was simple: keep doing what you’re doing.his

“He kind of just told me that I got to keep playing my game. When the opportunity comes to be in the lineup, to be able to do what I do best. He told me that I had a really good game, so that made me feel good. Whenever I get the chance to play again, I want them to be able to play in any situation and have the confidence to put me out there.”

Easier said than done, especially given the state of the Wolves this season in comparison to their championship year. 11 games into their season and the Wolves find themselves last in the Central Division – a complete 180 from their top billing not just in division but in earning the best record in the regular season last year.

For Lajoie, despite the new faces in the locker room, he’s maintaining that message from Carolina’s staff.

“Business as usual. Younger group so there’s a lot to learn for those guys and getting them pro ready in the locker room. On the ice, there’s certain situations and things we have to work on and I think we’re getting better and better every game.”

Perhaps the biggest change for Lajoie this season has been the letter earned on his chest. After a couple of weeks into the season without one, Lajoie was named the team’s successor to Andrew Poturalski as the next captain of the Wolves. Lajoie’s game on the ice has remained with the same dependability in all three zones with an emphasis on defensive responsibility. Off the ice, he’s admitted to a bit of a change with the added responsibility of being a leader to a young team.

“I think how I carried myself off the ice is huge even more this year with all the young guys looking up to us older guys to see how we act as pros. That’s something I try to be good at, trying to be a little more vocal this year because I am wearing the C. I’m not the most vocal guy but I am trying to learn to speak up more, I kind of did learn that from Potsy and a couple other guys last year like [Josh] Leivo and Noesen. They’ve really helped with that.” 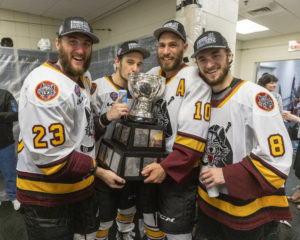 Filling in the shoes of such huge presences on and off the ice hasn’t been easy, but Lajoie has been learning to grow as a leader as the rest of the team learns to play with one another at the pro level. Replacing Chatfield on Lajoie’s right side this year is Anttoni Honka – a talented but raw 22-year old defender from Finland making his debut in North America. Under Lajoie’s tutelage, Honka’s defensive game, from his gap control to his positioning to break up opposing rushes, has already made noticeable strides just a handful of games into his career on the continent.

Despite the Wolves’ record to start out, Lajoie has confidence in his team’s ability to bounce back, grow in their system alongside one another, and make a run in the division.

“Obviously not the start we wanted, but at the same time we’ve been getting better each game. I think it’s abut being more consistent in our system and having that strong feeling with every guy doing their job every night. Me personally, I just want to be a good leader, be good defensively and contribute whenever I can offensively. I think as a team we’ll grow every game and I don’t see why we won’t be able to make playoffs this year.”