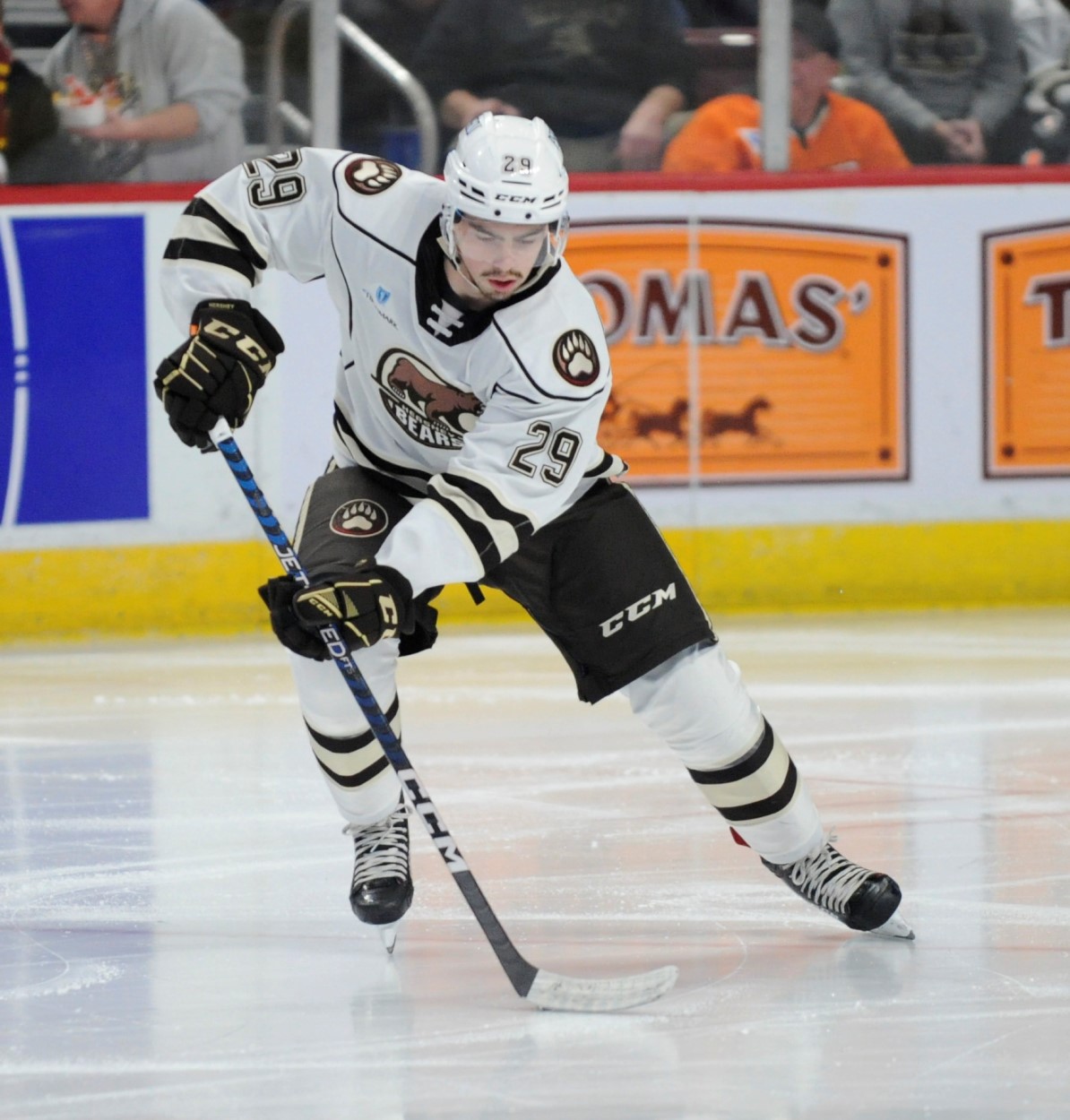 HERSHEY, Pa. – It’s hard to say the Hershey Bears would have had as successful a weekend as they did without forward Hendrix Lapierre. The forward flexed his scoring ability over Hershey’s last three games, with his line chipping in a total of 11 points alongside Shane Gersich and Ethen Frank, and with goals in all three of Hershey’s games, it’s hard to say the Bears win all of them without the trio of forwards. Lapierre moved into a tie for the lead in team scoring with ten points (three goals, seven assists) to move into a tie for ninth in the league in points among rookies. It only serves as the beginning for the 22nd overall pick of the 2020 National Hockey League Entry Draft as he continues to make his mark on the league in his first season.

The leap from the junior ranks to the professional leagues is often said to be the most difficult. Lapierre had a brief taste of what the NHL is like a season ago when he skated in six games for the Washington Capitals and memorably scored his first NHL goal, being lifted from the ice by Capitals forward T.J. Oshie. However, he was returned to the Quebec Major Junior League to skate for the Acadie-Bathurst Titan for the remainder of the season, as he did not meet the American Hockey League eligibility rules then. Now a full-time forward with Hershey, Lapierre jumped out to two points in his first two games, including his first AHL goal on October 16 against the Lehigh Valley Phantoms. He cooled off a bit as the Bears got used to new head coach Todd Nelson and honed their game through some growing pains in the four following games. The Bears have started to catch fire and play the right way under Nelson, and Lapierre’s strong play has factored in as he’s cracked the scoresheet in eight of 12 games he’s skated in so far on a streak of six points in his last four games (two goals, four assists).

It’s hard to say Lapierre doesn’t know when the spotlight is on him, either, as his points were extremely timely this past weekend. His assist to Gersich gave the Bears a 3-2 lead on Friday against a notoriously difficult Bridgeport Islanders club that stood above Hershey in the standings. Although the Chocolate and White had to earn the win in overtime, it allowed for Lapierre’s close friend and fellow rookie Vincent Iorio to score his first AHL tally to win the game. Watching Lapierre, Gersich, and Frank work their magic as gifted offensive players from their respective routes to the AHL is fun. Their success gives the Bears some much-needed additional scoring to complement their defensive skills. It’s no coincidence that Gersich and Frank have plenty of points on the line as both look to continue adding to their career numbers.

Lapierre’s skill came to the forefront of Saturday’s rematch as the Bears trailed 1-0 in a defensive contest going deep into the third period. Lapierre pounced on a loose puck in the skates of a Bridgeport defender and made a slick move to deposit the puck past the goaltender for his second goal of the season. The goal got the Bears into extra time, where experienced scorer Sam Anas put the game away with a wicked snipe. Lapierre kept the pace on Sunday in Hershey’s third game in as many days with a multi-point first period, scoring on a confident drive to the net and then setting up Bobby Nardella for a power-play blast that ended up being enough to take the win.

Hendrix Lapierre takes advance of the fortunate bounce and buries his second of the season! #BRIvsHER pic.twitter.com/LIIT6g8CRA

Lapierre follows in the footsteps of fellow first-round pick Connor McMichael, who scored a few memorable goals during his stint with the Bears back during the pandemic 2020-21 season. It was a shame that squad didn’t get to compete for a Calder Cup, as McMichael racked up 27 points in 33 games and graduated to the Washington Capitals. Historically, the Bears saw first-round pick Jakub Vrana debut with the Bears and enjoyed a few playoff runs, including a run to the 2016 Calder Cup Finals. More often than not, having a player of that caliber in your lineup yields the opportunity to win games and contend for championships. With such solid youngsters as Lapierre and Iorio in addition to highly regarded prospects like Lucas Johansen, Henry Rybinski, and Riley Sutter, it’s safe to say the Bears have a youthful edge to leave their claw marks on the rest of the AHL, and it’s only the beginning of things to come.