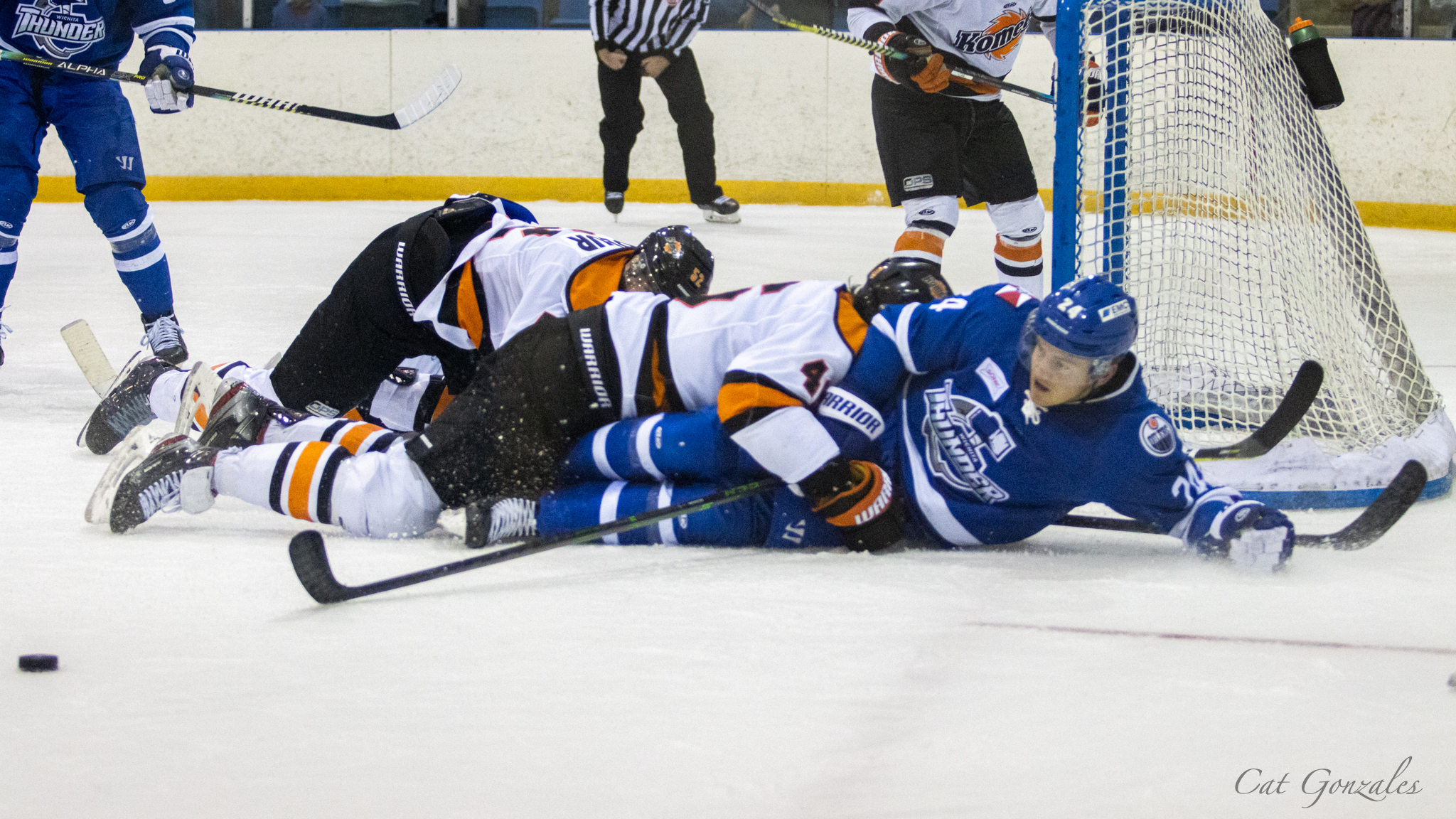 WICHITA, Kan. – It has been 1,148 days since the last Wichita Thunder win in the Kelly Cup Playoffs. The wait to reset that counter will extend into at least tomorrow.

In front of a boisterous and rowdy crowd at the Wichita Ice Center, the Wichita Thunder fell to the Fort Wayne Komets 3-2.

It did not take long for the two sides to renew their bitterness toward each other. The first period featured fast-paced, high-intensity action with multiple huge hits and no scoring.

In the second period, both sides stepped up the offensive pressure, but it wasn’t until Gordie Green scored off an unreal assist from Alex Peters to make it 1-0 Wichita. Peters made a huge hit along the wall, won the puck battle, then fed it across the goal-mouth to Green, who potted it by Dylan Ferguson.

With two and a half minutes left in the second period, Anthony Nellis scored his first of the playoffs when he capitalized on a one-timer that beat Evan Buitenhuis to make it 1-1 through 40 minutes.

The action picked up in the third.

Wichita picked up their net-front presence in front of Ferguson and it paid off when captain Ryan White scored his first ECHL playoff goal at 7:15 of the third to give Wichita a 2-1 advantage.

But what is a Wichita/Fort Wayne game without some controversy, right?

That comes in the form of a Fort Wayne goal, at the 10:22 mark of the third. Buitenhuis was tripped by a Komets player, which left an easy pathway for Randy Gazzola to score and even the game at 2-2. The official FloSports feed dropped out at the time the play happened, but looking at another internal camera, it was obvious there was interference and tripping on the Thunder netminder, neither of which was called by either official.

With the two teams facing overtime head-on, it would be Nellis that played hero on this night. Jacob Graves moved in to make a big hit and missed, which opened up Morgan Adams-Moisan to move by him and feed the puck to Roy, then Nellis, for the game-winning tally with 25.2 seconds left in regulation.

Wichita would have a chance to tie it. Jeremy McKenna had a wide-open net but was cross-checked by A.J. Jenks with eight seconds left.

“Having a lead in the third period is really disappointing to lose, and to lose the way we did….yeah, that one is hard to digest. We’re back tomorrow, put it behind us, move on, try to come out and play the same way we did tonight and limit our mistakes,” said Thunder head coach Bruce Ramsay.

Despite the loss, Ramsay was pleased with his team’s effort:

The same two teams meet again tomorrow night at 7:05 pm. Matthew Will and I set the table for the night with The Sin Bin Pregame Show, beginning at 6:25 pm on The Sin Bin App!