TULSA, Okla.- The Tulsa Oilers looked all but dead as they trailed the Rapid City Rush 5-2 with under a minute to play on Friday. 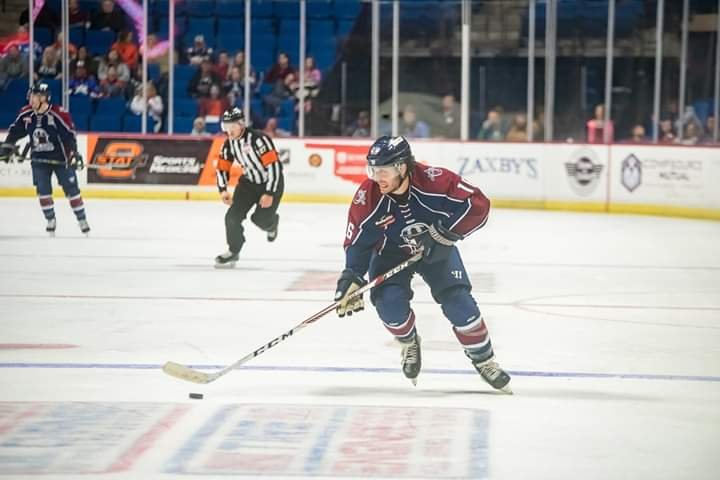 TULSA, Okla.- The Tulsa Oilers looked all but dead as they trailed the Rapid City Rush 5-2 with under a minute to play on Friday. However, it turned out the Oilers were still very much alive.
The Oilers started the game well, firing 12 of the game’s first 15 shots during the opening half of period one. The early pressure paid off, as just 7:04 in a bouncing puck gave the home side the lead.
The goal was the third of the year for Cam Knight, as his shot from the point ricocheted off a defender in the slot then took another deflection at the edge of the crease before trickling over the line. It was pinball magic for Tulsa, but was created thanks to an intelligent shot through bodies by Knight. Tulsa led 1-0 with just under 13 minutes remaining in the first, but the advantage wouldn’t last.
Rapid City began to take over momentum in the final half of period one and tied the score with 5:53 left in the frame. The goal came thanks to some inside positioning from the Rush, as Tyler Poulsen received a pass in the slot before turning as he protected puck and whipping a shot past Olle Eriksson Ek and into the upper-90 to level the score, 1-1.
The game looked set to go to the first intermission even, but that was not to be the case. With just 40 seconds left on the first-period clock, Peter Quenneville stepped into the zone and released a rocket from the far dot that beat Eriksson Ek stick side. It was Quenneville’s fourth of the year, sending the game to the first intermission with his Rush holding a 2-1 edge.
Rapid City was then given a power play to begin the middle stanza, thanks to an elbow from Mike McKee. As they have all season, the visitors from South Dakota made Tulsa pay for the infraction. The tally came 2:54 into period two, and was set up when Tyler Coulter gathered the puck behind the goal and sent a no-look feed to the slot. Gage Torrel was the man on the business end, as he sent a point-blank one-timer past Eriksson Ek. Torrel’s first professional goal made it 3-1 for the Rush.
The Oilers answered just under four minutes later, as J.J. Piccinich provided a highlight-reel pass of his own to set it up. The ECHL’s leading scorer drew a crowd as he circled behind the Rush cage, then slipped a beautiful backdoor pass through the slot to a waiting Ian McNulty. It was an easy finish for McNulty, and his second goal of the season pulled the Oilers back within one at 3-2 with 13:47 left in period two.
Piccinich spoke with The Sin Bin after the game, and went into detail about what he saw on the goal:

“We exited our d-zone, and I was just trying to kinda attack the middle. I realized their D’s cap was a maybe little off and I just went to go test it. That was kinda our game plan.  I was able to beat them around the corner & hook the net, and I knew McNulty was driving the net there. I honestly just threw it, basically a hope play in a way, but it was a decent wrap and the puck just squirted out. That’s kinda getting rewarded for getting pucks to the net like that.”

The momentum was not to last, though, as Tulsa took another penalty late in the frame and paid for it once again. Ryker Killins fired a high shot that Eriksson Ek was able to shoulder away, but the rebound landed right at the feet of an open Brennan Saulnier. Saulnier didn’t miss, and the power-play goal gave the Rush a 4-2 advantage to take to period three.
Tulsa was out of sync throughout the middle frame and it came back to bite them in the end. Oilers bench boss Rob Murray spoke with The Sin Bin post-game about what went wrong on Friday, and he kept coming back to the second period struggles:

“Typical of our game; we couldn’t score when given a chance. It’s getting old when we play well enough to win, yet we don’t. Two power-play goals for them. Poor penalties on our side to take those penalties.
“You know, too many games close but not good enough,” Murray continued. “We passed up some pretty good opportunities in the second period to shoot the puck. A couple goals, they outworked us. Especially on their first power-play goal, the puck was sitting behind Jared Thomas, and we didn’t win the puck. Just came down to little plays like that that made a difference in the game.”

The game stayed at 4-2 for the majority of the final frame, and looked to be headed for a run-of-the-mill finish when Saulnier wired his second of the night into an empty net to make it 5-2 for the guests with just 83 seconds on the clock. That changed in dramatic fashion in the final minute, however.
It started with a Piccinich power-play marker after Rapid City took a hooking minor with 51 seconds left. The goal came with 40 seconds remaining, as Steven Kaunisto whipped the puck down low to Danny Moynihan who immediately sent a one-touch pass to Piccinich in the slot. Piccinich finished the tic-tac-toe tally with a quick release that eluded Rush goalie Ivan Prosvetov to bring the Oilers with two.
Piccinich then pulled Tulsa within one 22 seconds later with a shot off the crossbar and in, prompting Coach Murray to call timeout with 18 seconds left to try to design the final piece of the would-be comeback. The Oilers won the draw and pushed forward for the climactic moment, but the shot tipped off the blocker of Prosvetov and flipped once-too-often as it carried just over the crossbar to seal a 5-4 Rush triumph.
Piccinich spoke afterwards about the frantic finish:

“We were fortunate enough to just get two goals right quick. Just a couple shots: one off the power play, one just in front we got a bounce. Then, you know, there was 18 seconds left, I think. We just wanted to win it forward and just funnel something towards the net and give ourselves a chance, and we almost did. So I give our team credit for that, but at the same time it was a little too little, too late”

The Oilers are now 6-9-1-0 on the season with the loss, and four of those losses have come against the Rush. Friday was already the fifth meeting in Tulsa this year, with three more meetings to be held in South Dakota next week.
The Sin Bin asked Piccinich what impact playing the same team so frequently has on the ice:

“It does make a difference. I thought they did a pretty good job boxing us out in front of their own net and kinda giving us a beating. They weren’t making it easy for us at all. I thought in some moments we did a good job controlling the puck in their end, and others they really beat us up. They were good with their sticks & bodies, made it tough for us, and their physicality definitely made a difference. That’s kinda been ramping up as we’ve been going along and playing them.”

The Oilers have other business to attend to before their rendezvous with the Rush in the Black Hills, namely a clash with the Idaho Steelheads tomorrow night.  Despite tonight’s loss, Piccinich says there are lessons to be learned and applied against Idaho:

“today we didn’t really play a full 60. I thought we had a good first, we kinda went to sleep in the second, and then we had an okay third. We just gotta learn from that and realize that how we were playing in the first — and those good waves of hockey that we were playing — needs to be spread across 60 minutes. and if we can just take that mentality into tomorrow’s game, we should be fine.”

Coach Murray also spoke of the importance of playing a full 60 minutes tomorrow, albeit with a more direct approach:

“I mean, we just have to. We have to be better. We’ve got to play a 60-minute game.  Too many turnovers in the first period (tonight), soft plays…we’ve just gotta bear down. It’s not just one guy, it’s really the whole team in general.”

Face off between the Oilers and Steelheads is set for 7:05 p.m. CT on Saturday. You can follow along with the action, as you can all season, by following us on Twitter. Simply follow @SinBinOilers for our Tulsa take, and @SinBinNews for all your AHL, ECHL, and SPHL news and notes.