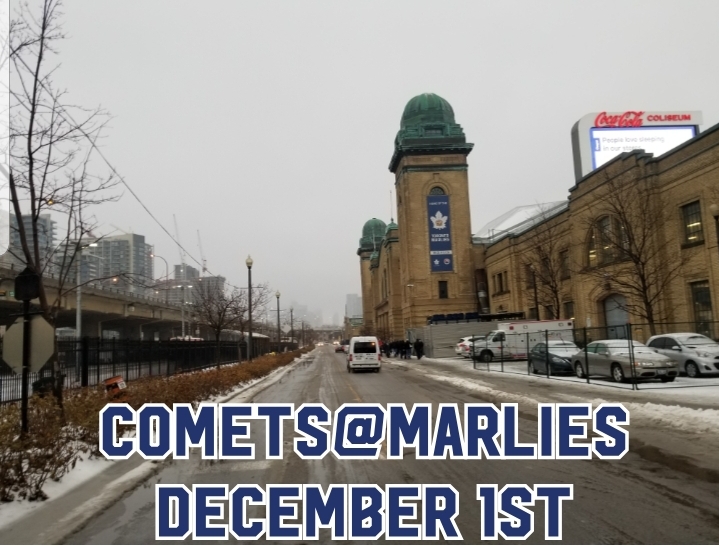 TORONTO – Saturday’s game saw the Toronto Marlies drop their seven-game winning streak and lose their first home game this season. Toronto has yet to lose to a team back-to-back this year, and with a rematch set with the Utica Comets on Sunday, things had to be different for Toronto.
Kasmir Kaskisuo started in net for the Marlies. This was his second game since being sent back down to the AHL by the Maple Leafs on November 25. He stopped 33 of 35 shots on Friday against Rochester. Michael DiPietro got the start for Utica once again. DiPietro let in three goals in yesterday’s win.
Since now Maple Leafs Head Coach Sheldon Keefe left the Marlies, they have gone 2-for-12 on the power play. The fourth-place power play in the league went to work early on. Pontus Aberg, who had points in five consecutive games, spun a pass cross-grid to Jeremy Bracco. Bracco then found Adam Brooks cross-crease to get the first goal of the game.
Utica would answer quickly with a goal by Jonah Gadjovich. Just like yesterday, the Comets stuck to the back-door plan and fired a pass to Gadjovich to tap it in and tie the game.
With Toronto on the power play, Utica made an intense rush to score short-handed. Carter Bancks made a perfect spin move to find Lukas Jasek on the back-door to beat Kaskisuo and make it 2-1.

With the period down, the shot sheet read 8-8. It would be hard not to question the cross-crease goals — with Utica scoring both of their goals that way, it’s crucial to shut down those chances before they start.
The 25th-ranked penalty kill in the league took effect near the midway point of the second for the Marlies. Reid Boucher collected a pass, and the league leader in goals buried the one-timed shot. The goal was enough to put Utica ahead, 3-1.
That sequence wouldn’t be enough to end the parade to the penalty box. Toronto would forfeit two more power play chances to Utica in a 2:24 span. Though they were killed, it prevented the Marlies from generating any offense, only registering three shots in 14 minutes.
At the end of 40, Utica outshot Toronto in the second frame, 6-4. With only four shots in the second period and what seemed like an endless power play for the Comets, you could tell the Marlies were out of gas. Having played three games in three days, you could say it took a toll on the Baby Buds. Even with Toronto having scored the most goals in the second period in the league thus far this season, they came up dry for 20 minutes.
Both teams took turns sitting in the box in the final stanza. With almost two minutes of four-on-four and an additional two minutes of power play time, the Marlies couldn’t finish the mission early on.
Shortly after, Toronto would get the much needed goal. Jordan Schmaltz would receive a one-timed pass from Tanner MacMaster, and the drive got tipped from Hudson Elynuik to make the game 3-2. MacMaster now has points in nine straight games.
That wouldn’t stop the Marlies from scoring again, either. Brooks found himself parked in front of DiPietro and managed to stuff in the goal for his second of the game. Egor Korshkov and Martin Marincin both received helpers.
The third unanswered goal would come late in the final frame from Jesper Lindgren. The point blast would give him his first AHL goal, with Brooks and Bracco both earning assists on the marker.

2:21 would mark the fifth goal for the Marlies and Brooks’ third of the night. Bracco received his 100th career assist on the pass across to put the final nail in the coffin for the Comets. Darren Archibald got a helper on the goal to move his point streak to five games.

”It’s great to be rewarded after being snake-bitten for a couple of games.”

It’s hard to knock Toronto after playing three straight games, especially after leaving the third with a win. Assistant Coach MacLean was very proud of his club today, especially with their play in the final regulation period.

“I couldn’t be more proud of the guys; they really dug in after a long week.”

The Marlies next game comes on Wednesday against Rochester in New York. The game will be broadcast on AHLTV at 7:05pm EST.

Make sure to follow all of Zack’s news and notes on the Toronto Marlies on Twitter (@SinBinMarlies)! Also, don’t forget to give The Sin Bin a “Like” on Facebook for all of your additional AHL, ECHL, and SPHL coverage!