The loss, their seventh in the last ten games, dropped Iowa into a tie for seventh place in the Central Division 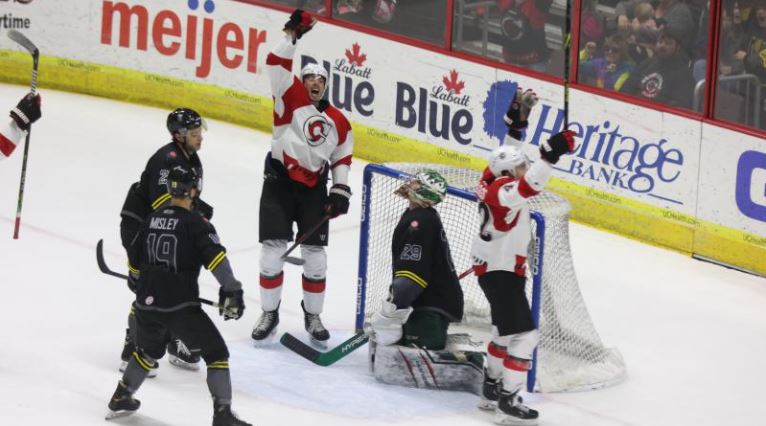 CINCINNATI, Ohio – The Iowa Heartlanders rallied from a two-goal deficit on Friday evening, scoring twice in the second period. However, the Cincinnati Cyclones scored two goals in the third to earn a 4-2 victory. Lukas Craggs and Jesse Schultz each had a goal and an assist for the Cyclones. Kaid Oliver and Kris Bennett scored goals for Iowa. The loss, their seventh in the last ten games, dropped Iowa into a tie for seventh place in the Central Division.

Cincinnati came away with the only goal in the first period. Luc Brown made a great pass to Schultz near the net, who corralled the puck onto his stick before lifting a wrist shot past Hunter Jones for his 22nd goal of the year.

The one-goal lead held through the first period as Cincinnati outshot Iowa, 11-8. Craggs extended his team’s lead to two with his seventh goal of the season. Schultz made a perfect cross-ice pass to the right face-off circle where Craggs blasted a one-timer by Jones.

The Cyclones looked like they were in command of this game, but Iowa responded with two goals in the span of about five minutes to tie the score. The first came at 6:08 off the stick of Kris Bennett, who delivered his 34th goal of the year. It was a perfect feed from Ryan Kuffner, who dished the puck across the crease to Bennett at the back door. The Iowa forward simply tipped the puck past Michael Houser to make it a 2-1 game.

At the 11:21 mark, Oliver tied the score. Luke Nogard took a shot that Houser saved, but Oliver put in the rebound for his 14th tally of the year.

The Heartlanders were back in the contest, but Cincinnati retook the lead 7:15 into the final frame when Louie Caporusso scored his 21st goal of the year. Moments after Houser had left the game when Bennett ran into the Cincinnati netminder, Matt McLeod took a shot that Jones saved, but Caporusso slammed in the rebound to put the Cyclones back on top for good.

With 1:37 left in the contest, Dominic Franco sealed the victory. Craggs passed the puck to Franco who lifted a wrist shot past Jones for his ninth goal of the year. That made it 4-2 which would be the final.

Jones took the loss, stopping 30 of 34 shots. He dropped to 4-9-3. Sean Bonar earned the victory in relief, stopping all seven shots he faced.

These teams will square off again on Saturday evening. The puck drops at 6:10 Iowa time.