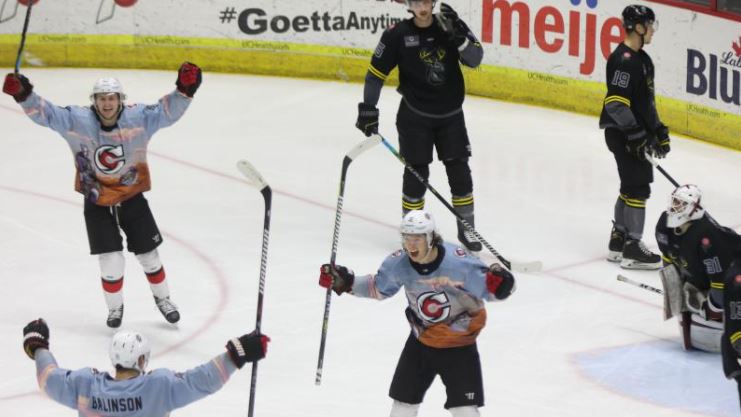 CINCINNATI, OH – The Cincinnati Cyclones broke open a close affair with three third-period goals to down the Iowa Heartlanders on Saturday, 5-2. Louie Caporusso and Justin Vaive each had three points for Cincinnati, and Sean Bonar stopped 30 shots. Zach White and Riese Zmolek scored the goals for Iowa.

As they had the night before, the Cyclones scored two first-period goals to take the early lead. Lukas Craggs gave his team the lead at 3:58, netting his eighth goal of the season. Craggs moved through the neutral zone down the right wing. When he reached the half-board, he lifted a wrist shot that beat Corbin Kaczperski to make it 1-0.

Almost exactly eight minutes later, the Cyclones entered the Iowa end on a 3-on-2 break. Vaive passed the puck to Zack Andrusiak, who blasted a shot by Kaczperski for his 26th goal of the year. That gave Cincinnati a two-goal lead entering the first intermission.

The teams combined for just 11 shots in the first period, but the second frame was a wild affair that saw Cincinnati outshoot Iowa, 17-15. Surprisingly, only one goal was scored in the period, however, as White scored his 15th goal of the season just before the midway point. Ben Sokay used the forecheck to steal the puck inside the Cyclones zone. He knocked the puck into the slot where White was standing alone to drive in the puck.

The Cyclones looked to give themselves a little breathing room as Matt McLeod scored 4:43 into the third. Lincoln Griffin fed the puck toward the slot, where McLeod was able to redirect it past Kaczperski to make it 3-1.

The two-goal advantage did not last long as Zmolek scored 73-seconds later to make it a one-goal game again. It was a great individual effort from Zmolek, who scooped up the puck in the corner of his own end, sped through the neutral zone, and danced around two Cincinnati players before beating Bonar with his fourth goal of the year.

The Heartlanders had a couple of chances to tie the score, but Jesse Schultz extended the Cyclones’ lead to two with his 23rd goal of the year at 8:30. Andrusiak passed the puck to Schultz, who beat Kaczperski to make it 4-2. Caporusso added an empty-net tally with one second left to close out the scoring.

Caporusso finished with a goal and two assists, and Vaive had three assists. Andrusiak and Schultz each had a goal and an assist.

The loss dropped Iowa to 27-29-9. The Heartlanders travel to Indianapolis to take on the Indy Fuel on Sunday. The puck drops at 3:00 Iowa time.