ALLEN, Tex. – The Allen Americans controlled nearly the entire game following the first intermission, going on to outscore Wichita 6-1 in the final two periods of play to defeat the Thunder 7-3. 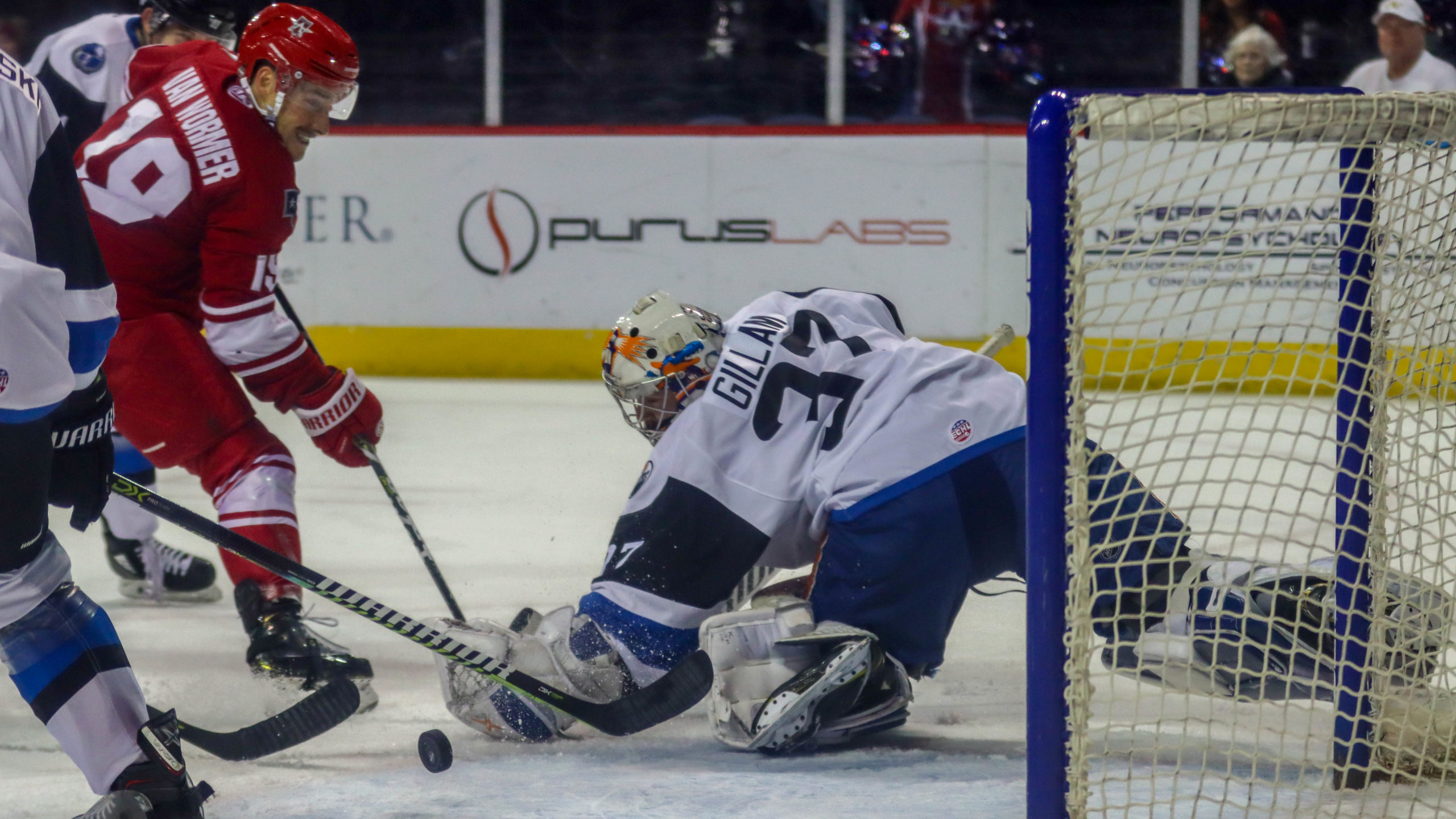 ALLEN, Texas – The Allen Americans controlled nearly the entire game following the first intermission, going on to outscore Wichita 6-1 in the final two periods of play to defeat the Thunder 7-3.

It was Jason Salvaggio who got things started for the Thunder at 5:15 in the first. After an initially blocked shot, Salvaggio followed the shot up with a second look to Jake Paterson‘s right side, just over his pad to give the Thunder a lead.
Just under three minutes later, Wichita doubled their lead as Cameron Hebig scored his finest goal in a Thunder sweater. After grabbing a loose puck near the blue line, Hebig skated in unopposed, made a nice move to Paterson’s left side and buried a shot.
Allen got an answer before the period ended though, as Jordan Topping scored his fifth goal of the year, giving the Americans momentum into the first intermission. Tyler Sheehy earned an assist on the goal, the first of four on the night.
Possibly the most surprising stat of the night was the 17 shots Wichita put up in the first, leading Allen 17-13 in that category. Wichita could have led by even more at the break if it hadn’t been for Allen’s six blocked shots in the opening frame. There were no penalties in the first period.
At the beginning of the second, Wichita’s play began to slow down and lose figure. Allen put their foot on the gas and were rewarded with a powerplay in the second minute of the first period. 45 seconds into the powerplay, Stepan Falkovsky scored a game-tying powerplay goal after a nice pass from Sheehy.
Just under a minute and a half later, Gabriel Gagne scored his eighth goal of the year, an unassisted tally off a Thunder turnover.
Wichita held their footing for the next six minutes, despite only recording one shot in the first 10 minutes of the second period. Just following the halfway point of the game, Josh Brittain scored his first goal of the year with a great wrist-shot snap over Mitch Gillam‘s right shoulder, giving Allen a 4-2 lead.
The Thunder defended very well in the next couple of minutes, recording five of their eight blocked shots in the period following the Brittain goal.
Wichita had a great opportunity open up just after the 17-minute mark, as Spencer Asuchak head to the penalty box for tripping. Nine seconds later, Jack Combs fired a shot from Paterson’s left side. Paterson made the initial save but left a rebound at Stefan Fournier‘s feet for an easy power play goal, diminishing Allen’s lead to 4-3.
The Americans held tightly to the lead into the second intermission, outshooting Wichita 22-9 in the second period.
Wichita came onto the ice in the third playing some of their best hockey of the night, creating quality scoring chances and limiting the chances Allen had. This wore off in the first seven minutes as Allen began finding chance after chance, only to be met with solid goaltending from Gillam.
With just over 12 minutes to play in the game, Wichita found themselves on a power play. Fournier sat in his normal position, just in front of the rival goaltender to act as a screen. After a shot was sent in, Fournier jumped out of its way and got side slashed by an Allen stick, knocking him into Paterson and to the ground. Patrik Parkkonen fired a shot from the right faceoff dot to score. Immediately, the goal was called off due to “incidental contact” in the slot. The no-goal call would not be reviewed, and Allen kept their 4-3 lead.

The call deflated the Thunder bench and Allen ran with the momentum.
Gillam did his best to keep the Thunder in the game, making one of his nicest saves of the year with just over five minutes to go.

At the 16:05 mark of the third, Olivier Archambault scored his sixth goal of the year on a breakaway. Gillam made the first stop, but the rebound snuck past to give Allen a 5-3 lead.
One minute and thirteen seconds later, Allen added another as Brett Pollock skated through the defense and put a shot past Gillam.
The Americans were not done, though, as Alex Guptill scored his fifth of the year with just under two minutes remaining. After bringing Gillam out of his crease, Guptill skated the puck behind him, shooting at a nearly open net for the goal.
Allen outshot the Thunder 58-39 and outhit Wichita 34-26. Wichita nearly defeated the Americans in the faceoff category (31-30) largely thanks to the help Lane Bauer brought to the center position.
Wichita finished 1-for-6 on the power play while Allen finished 1-for-4.
Paterson earned the win in a 36-save performance; Gillam was credited with the loss, even after recording 51 saves.
Wichita and Allen go at it again tonight in game two of the three-in-three this weekend. The Sin Bin pregame show will begin at 6:40pm CT on the Sin Bin app, while puck drop is scheduled for 7:05pm CT.
Follow both Matthew Will and Matthew Harding on Twitter for all your game insight and analysis of the Wichita Thunder!