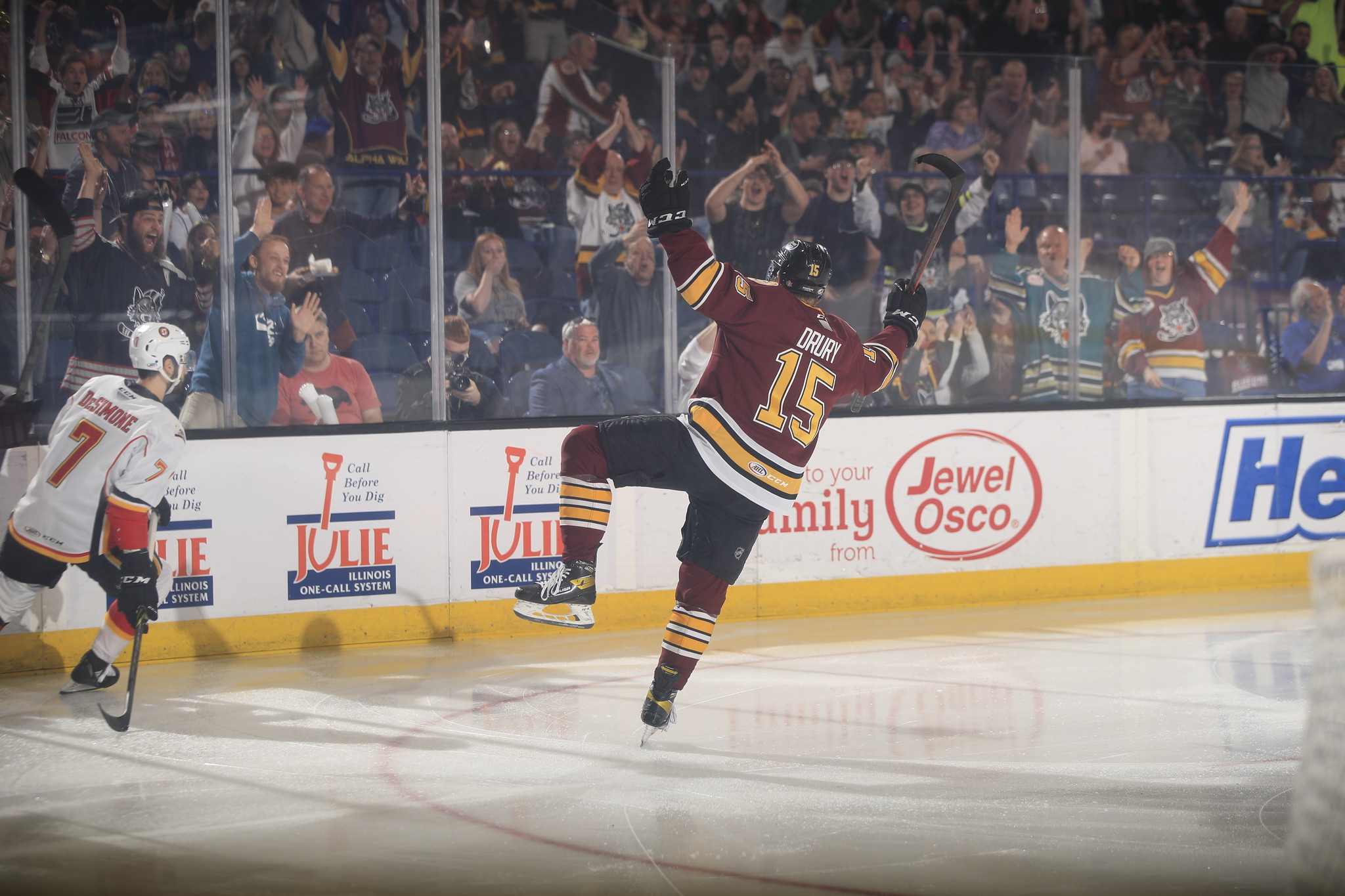 After a game one filled with fireworks and dramatics, the stage was set for a highly anticipated game two of the Western Conference Finals

ROSEMONT, Ill. – After a game one filled with fireworks and dramatics, the stage was set for a highly anticipated game two of the Western Conference Finals featuring the AHL’s top two teams. An encore to such a thrilling opening game with two heavyweight rosters brought the eyes of the league upon Allstate Arena for this matchup between the Stockton Heat and the Chicago Wolves.

The intrigue began before the puck even dropped when it was announced that Chicago Head Coach Ryan Warsofsky was giving the crease to Pyotr Kochetkov in game two, marking his AHL playoff debut. With a condensed schedule and travel to the west coast this series, Warsofsky previously said his intention was to give both of his goaltenders playing time in the series before Game One. Alex Lyon has been stellar in the Wolves’ crease this playoff run with a 7-1 record and 2.13 GAA, but with Kochetkov’s 13-1-1 record during the regular season, it was only a matter of time before he got the crease. However, there was no question who he would stare down at the other end, as Stockton would again lean on their rookie stud Dustin Wolf in net.

The Heat came out swinging in an effort to tie this series up, but the Wolves weathered the storm and found some more late-game heroics to come out with a 3-2 win to take a 2-0 lead in the Western Conference Finals.

Chicago wasted absolutely no time getting on the board in this one. Just 17 seconds into the game, David Gust created a turnover at center ice and got the puck to Jack Drury, leading an odd-man rush going the other way. Drury sniped a perfect shot over Wolf’s glove, off the bar, and in for the early 1-0 lead.

6:46 into the period, Stockton’s Martin Pospisil took a holding penalty in the offensive zone to put a dangerous Wolves power play on the ice that went 3-for-3 in Friday’s game one. However, the Heat would strike when Eetu Tuulola went in 1-on-3 and put a bad angle shot on net that bounced off Kochetkov’s blocker, over the goaltender’s head, and dropped into the empty cage behind him for the tying goal that he would want back.

1-on-3? The Big Finn likes those odds. pic.twitter.com/8we8hhCGtl

The Wolves would get a second look at the power play but would fail to generate the success they found in game one. In fact, they didn’t even record a shot on the man advantage, with Stockton crowding the blue line and refusing to give entries to Chicago that they had gained in Friday’s contest – an excellent adjustment from Head Coach Mitch Love on the Heat bench.

Stockton took the momentum off Tuulola’s bouncing goal and ran with it. Their aggressive pressure hemmed the Wolves in for much of the second half of that first period, and their big bodies clogged up the lanes that the Wolves would usually attack with speed and refused to give up any high-quality chances on Wolf at the other end. As a result, they held a 13-7 lead in shots going into the intermission all tied up.

Stockton once again came out flying and dictated the pace in the second frame. The Wolves haven’t had many stretches this season where they found themselves playing in their own zone for extended shifts without the puck, but the Heat’s game got the pucks in deep, came in hard along the boards, and created chances carried over from the end of the first. Once again, Chicago found themselves hemmed in their own end, trying to just escape shift after shift. Coach Warsofsky was visibly upset with his team’s performance, challenging the bench to turn back towards the game that had made them successful all season long.

The Wolves would respond by giving up a go-ahead goal. Justin Kirkland worked a give-and-go with Luke Philp in the neutral zone and quickly attacked the Chicago end, firing a shot against the grain over Kochetkov’s glove to give Stockton a 2-1 lead.

The Wolves were back on the power play just two minutes later, with Tyrell Goulbourne sitting for a trip and desperately needing a goal. The potent first line had its looks but couldn’t find the twine – but it took some hard work from Gust behind the net to create a turnover for Noel Gunler out front in the right place at the right time to stuff a shot through Wolf’s five-hole to tie this game at 2-2.

Stockton nearly regained the lead just moments later when Glenn Gawdin made a power move on net with the rebound popping out front to Jakob Pelletier with what he thought was a wide-open net. Jalen Chatfield stepped into the crease and kicked his skate out to stop the puck from going into the gaping cage, and somehow the Wolves managed to keep this game tied heading into the third.

Just 1:19 into this one, Richard Panik was called for boarding, putting the Wolves back on the PK. Chicago responded with a huge kill, led by Max Lajoie with big shot blocks and plays along the boards leading to zone exits. The Wolves seemed to feed on that energy, or whatever Coach Warsofsky said to them in the locker room, because they finally found their game. Holding on to the puck in the offensive zone, attacking with speed, and for the first time this game, really dictating the pace and getting those high quality chances on Wolf en masse.

Chicago couldn’t beat find a way to beat Wolf, and it looked like this game was heading to a second consecutive overtime.

Josh Leivo had other plans.

Leivo, who was denied on an earlier breakaway in this game, found himself the recipient of a Jesper Sellgren lead pass in all alone and made no mistake beating Wolf low blocker with just 17 seconds left to put the Wolves ahead.

The goal was Leivo’s ninth in nine games, giving him the AHL lead and his 17th point of the postseason. There weren’t enough ticks on the clock for the Heat as the Wolves wrapped up the win to claim the 2-0 series lead.

The series heads west to California, where Stockton will play host on Wednesday, June 8 at 6:30 PM PST.