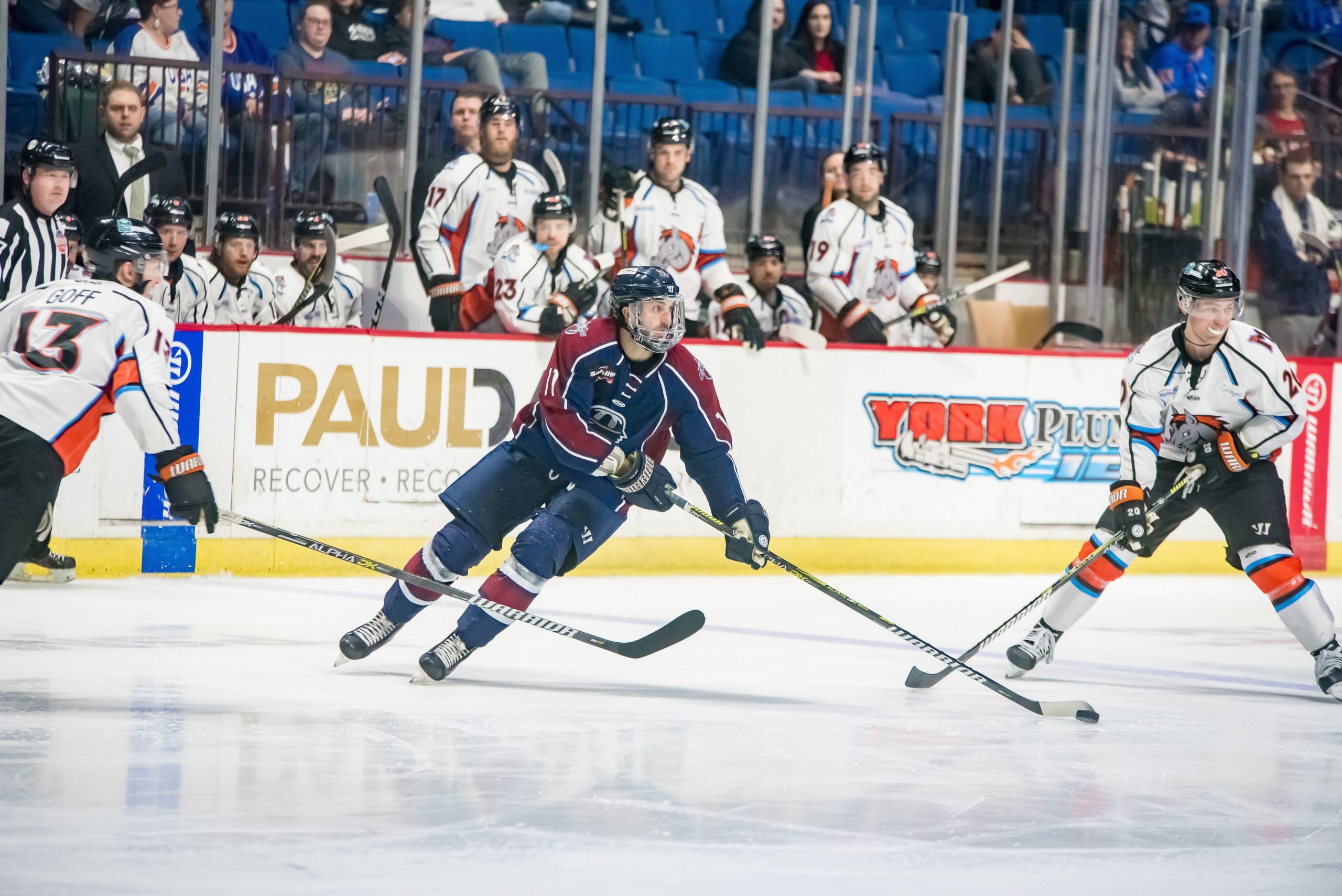 "Lethargic" Oilers Run Over By Mavs

TULSA, Okla. – It started out fast for the Tulsa Oilers, but once the Kansas City Mavericks responded to Adam Pleskach’s early goal, they seized control and cruised to a 5-1 victory in front of 4,565 in the BOK Center on Friday night.

"Lethargic" Oilers Run Over By Mavs

TULSA, Okla. – It started out fast for the Tulsa Oilers, but once the Kansas City Mavericks responded to Adam Pleskach‘s early goal, they seized control and cruised to a 5-1 victory in front of 4,565 in the BOK Center on Friday night.
Pleskach deflected a Miles Liberati shot past Mavericks goaltender Tyler Parsons on the power play at 2:39 of the first period, giving the home side a lead that wound up lasting four minutes.
After that, it was all Kansas City.
The Mavericks scoring onslaught lasted through their next ten shots, which netted them four goals. From the sixth minute of the first period (when Rocco Carzo deflected a point shot past Oilers goalie Olle Eriksson Ek), through the fourth minute of the second, the Mavericks ran roughshod over the Oilers (particularly in the defensive zone).
Terrance Amorosa, David Dziurzynski and Bryan Lemos scored three goals through the Mavericks next nine shots to lock down whatever momentum the Oilers tried to dredge up. Another goal by Carzo in the third period was almost an afterthought.
A frustrated Tulsa head coach Rob Murray didn’t hesitate in telling it like it was after the game.

“We’re an easy team to play against,” he said. “We didn’t make it hard for them to score goals. Goaltending is an issue, with four goals on ten shots.
“The first two goals had no blocked shots,” Murray continued. “We had lethargic play and lack of hockey smarts.”

After outshooting the Mavericks 17-8 in the first period, the Oilers only bested the Mavericks by one shot in the second (11-10). Kansas City then turned Eriksson Ek’s net into a shooting gallery in the final frame, sending 12 shots at the Tulsa net, while Parsons only had to deal with six on his side of the ice.
With the season rapidly approaching the midway point at the All-Star break, Tulsa really needs to start getting their act together if they have any hope of making the postseason. It’s glaringly apparent that whatever magic the club had last season did not carry over into the 2019-20 campaign. That, in addition to ‘hockey smart’ play, is something the Oilers desperately need moving forward.
The Oilers will move on to game two of a three-game, weekend homestand with a tilt against the Utah Grizzlies on Saturday night. Puck drops at 7:05pm CST.
Follow both Rich and Cameron Turner on Twitter for live, in-game coverage and Tulsa Oilers news & notes! Don’t forget to give The Sin Bin a follow on Twitter and Facebook for all additional AHL, ECHL, and SPHL minor league hockey coverage!