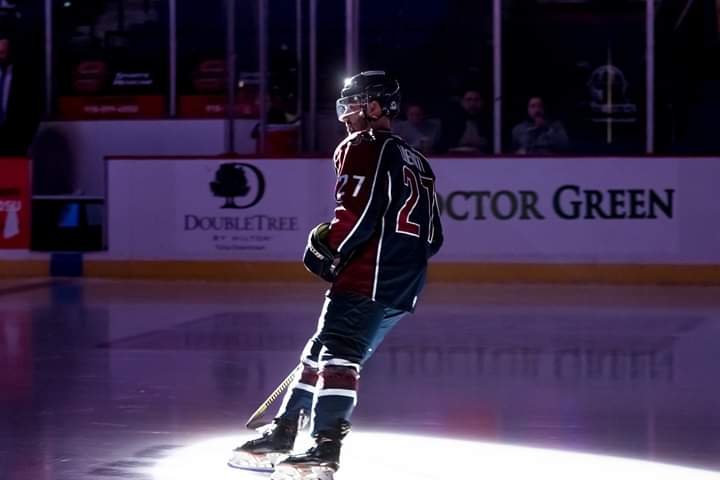 TULSA, Okla.- The Tulsa Oilers did not impress Coach Rob Murray with their third-period play on Thursday. Still, bright spots such as Miles Liberati and Evan Fitzpatrick helped Tulsa find an important win anyway.
The Oilers took a 3-1 lead to the second intermission but then had to hold on for dear life as the Swamp Rabbits threw everything they had into the comeback attempt.  Greenville played the majority of the frame in the offensive zone and outshot shell-shocked Tulsa by a staggering 19-5 count over the final 20 minutes.  Despite the wildly unbalanced shot clock, the Oilers were able to overcome and claim the two points thanks to a stellar 36-save effort from Fitzpatrick.
Murray was straightforward with the media from the start after the game, as he began his post-game comments with a brutally honest assessment of his team’s play.

“I’m not happy with that performance whatsoever,” Coach stated.  “We’ll take the win, and you know what, I’ll tell you some games you deserve to win and you don’t, and you’re frustrated, and you gotta take the ones that maybe you didn’t deserve to win and just pocket it.”

Tulsa’s fearless leader was understandably frustrated with the effort in the third on Thursday, and it hurt all the more that it came after his club’s best outing of the season thus far.  On Wednesday, the Oilers blitzed the visiting Swamp Rabbits to the tune of an 8-2 thrashing in the first half of the back-to-back between the teams this week.  Murray lamented the fact that Tulsa could not build off the impressive win when asked what his team had done differently in round two.

“We played a lot faster last night. Special teams have been better,”  Coach commented.  “but our turnovers, our inability to clear the puck out of our own zone, their second goal we don’t get a blocked shot, there are just little things.  I’ll get over it,” Murray continued.  “but I’m not happy with tonight’s game because I felt that we were going in the right direction last night. It should have been a springboard for us and we should have come out flying tonight and we really didn’t and we need to be better than that.  But like I said, you’ll win games that maybe you shouldn’t and you’ll lose games that you should (win). So we’ll take it and hopefully it all evens out in the end.”

Tulsa had a lot to do with the near-meltdown over the final frame, of course, but you always have to remember there are two teams of paid pros competing on the ice.  Greenville entered town 4-2-0-0 before Wednesday’s loss, and the visitors came out determined to find a way to leave town with at least one win.  Murray was quick to note how Tulsa’s troubles were amplified by its talented foe and said he would take the win without looking back.

“We’ll take it,”  Murray began.  “We’ll move on and we’ll forget about this game and we’ll never see this team again this year unless we see them in the playoffs, and it’s non-conference points that are important, so we get those.  This is a good team. They are a very good hockey team. We didn’t take them lightly last night, and I don’t think we did tonight,”  Coach continued.  “I just think we sat back in the third. Nineteen shots. 19-5 we got outshot in the third period.  That’s ridiculous. It was just like guys falling down, tripping over each other, it was a recipe for disaster that we avoided.”

The predominant reason his team was able to hold on was the play of the man in the crease.  Fitzpatrick sparkled in his first start in two weeks and shone exceptionally bright during the third-period onslaught.  He stopped 18-of-19 shots in the third, and his ability to shoot from post-to-post in a snap denied multiple backdoor opportunities that appeared destined for glory.

“We had countless turnovers, and Fitz,” Murray said of his goalie.  “that’s the best game I’ve ever seen Evan Fitzpatrick play, and if it wasn’t for that we lose that game 5-3, 6-3.”

Fitzpatrick spoke with The Sin Bin afterward and talked about what he saw during the third period blitz from Greenville.

“You know in a 3-1 game they’re gonna push.  They got a lot of pucks to the net,”  Fitzpatrick said.  “they put a lot of bodies in front, and they got one by me there.  For me, it was just got out there, shut it down, and just don’t let them get another one.”

Fitzpatrick, a 21-year-old from St Johns, Newfoundland, had struggled in his first two starts of the season, but everything seemed to fall into place for his first win of the year on Thursday.  Fitzpatrick showed great horizontal mobility during the game, and his vision through traffic excelled as well.  He credits his hard work off the ice for his success on it against Greenville.

“All summer long working on footwork.  You know the pro game is a lot faster,” Fitzpatrick said.  “so last year was kind of like a transition year for me and this year I wanted to come in here and really put in a good effort every night.  The first two games didn’t go the way I wanted so I just worked hard in practice. I had about fourteen days without playing, so I did a lot of work. Just footwork, a lot of shots, a lot of cross-crease stuff, a lot of stuff like you see in every game, so I just put in the work as much as I could.  You just gotta keep working hard and you know the stars will align at some point.”

Another prominent performer was the first-year Oiler Liberati.  The defenseman potted a goal and added a helper on Thursday, bringing his total number of points on the year to ten (3G, 7A).  He has put in the work defensively as well, and Murray has undoubtedly noticed his play.

“Liberati, he’s been definitely our best defenseman and not just the shots and points production right now,”  Murray remarked.  “He’s definitely stepped up. There’s a guy that’s hungry, because he’s a guy that’s bounced around in this league a little bit and he wants to make a statement.  He believes he’s good enough to be a top defenseman at this level, and he’s taking advantage of his opportunity right now and he’s playing a really good brand of hockey for us right now.”

Liberati had faced Greenville once last season as a member of the South Carolina Stingrays, but when he spoke with The Sin Bin, he said the extra game of experience didn’t come into play. Instead, he said, it was Murray who diagnosed the holes in the Rabbit defense.

“Not really for me because I only played them one time,” Liberati said.  “but Coach Murray came in and gave us a good pre-scout and some good video on them and showed us their weaknesses and I think that we were able to take advantage of that.”

Liberati was humble and to the point when asked about his run of success to begin the year.  He said it has really just been a matter of playing crisp hockey and then allowing good things to happen.

“Yeah, it feels good,” Liberati stated.  “Just trying to get pucks on net and give guys good passes coming out of the zone and hope something good comes out of it, and lately it’s been working out.”

The Oilers know they need to accentuate their successes and minimize their errors, and Liberati opened up about what the Oilers can take from Thursday’s third period.

“Yeah, we could have tightened it up a little bit there in the end.  We got a little nervous I think,” liberati addmited.  “but a win is a win in the end, so we have to build off that and look at the positive side of it and look at the good things we did and build off that.  We’ve just gotta remember the things we’ve done well that helped us win these two games, and if we can do that I think we’ll be fine going forward.”

Tulsa is now 2-0-1-0 in its last three outings, helping the overall record edge ever nearer to .500 at 4-6-0-1.  Every point is critical in a division such as the ECHL’s Mountain, and Murray spoke of the importance of stringing together points amidst a challenging schedule early.

“We need the points, we need the wins,” Coach articulated.  “and that is definitely the positive.  We’ve got five points in our last three games with the overtime loss in Kalamazoo.  We’re putting points together and we need to, because we’ve played twice as many games as every team in this league right now.  That’s eleven games and you have teams that have only played five, which is mind boggling. Nobody looked at the schedule I guess.”

The schedule doesn’t let up for Tulsa, as the team gets right back to action on Sunday afternoon inside the BOK Center.  The visitors will be the Rapid City Rush for a fourth time already this season, and the Rush have had little trouble making Tulsa home away from home.   Rapid City is 3-0-0-0 inside the BOK Center this season, and now 16-4-0-0 since the teams began ECHL play in 2014-15.   Tulsa will be looking to make a statement about who the rink belongs to when the puck drops at 4:05 p.m. CT on Sunday.
You can follow the action on Sunday, as you can all season long by following us on Twitter.  Simply follow @SinBinOilers for our Tulsa take, and @SinBinNews for all your AHL, ECHL, and SPHL news and notes.