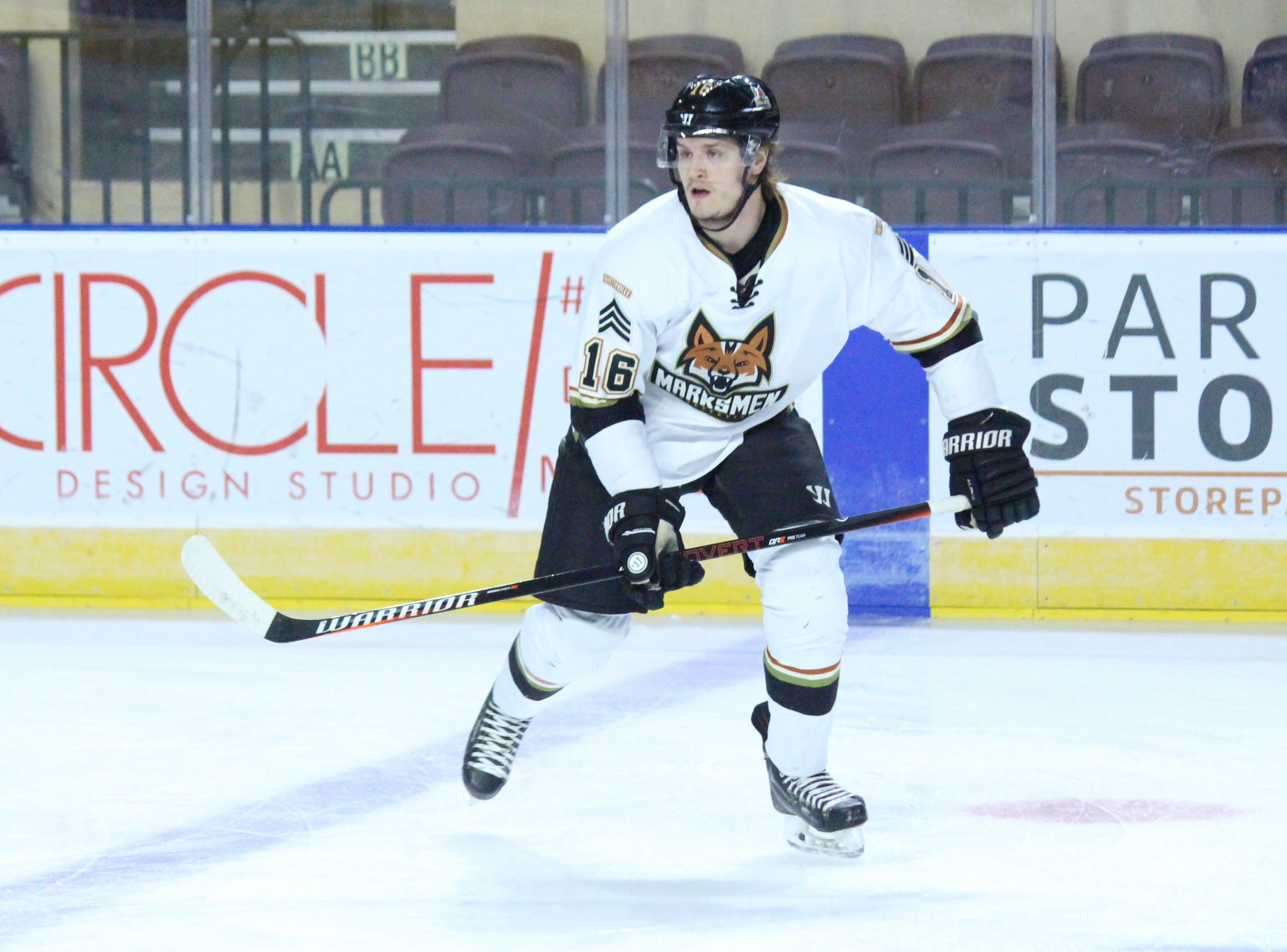 Life is a Highway for Sam Wilbur

Forward Sam Wilbur finished up his first year as a professional this past spring. The Sin Bin’s Sarah Hobday recently spoke with Wilbur about his adjustment from university to professional hockey, and all the miles he drove between the four teams he played for this past season.

Life is a Highway for Sam Wilbur

Forward Sam Wilbur finished up his first year as a professional this past spring. The Sin Bin’s Sarah Hobday recently spoke with Wilbur about his adjustment from university to professional hockey, and all the miles he drove between the four teams he played for this past season.

Sam Wilbur grew up in Saginaw, Michigan. He spent two seasons in the Northern Ontario Junior Hockey League (NOJHL) before moving on to university hockey. Wilbur spent one year at the University of Lethbridge in Alberta before transferring to SUNY-Fredonia, where he led the Blue Devils in scoring in his junior and senior year. Sam majored in Business Management, but still has nine credits to go before graduating due to some credit transfer issues when he switched universities.
Once Wilbur finished up three years in Fredonia, he was signed to an amateur tryout offer with the ECHL’s Tulsa Oilers on March 9, 2018. Sam made his professional debut on March 10 in a game against Wichita, notching his first pro point with an assist on the game-winning goal. He then scored his first pro goal (which turned out to be the game-winning goal) in a win over Kansas City on March 16.
Sam’s first professional points just heightened the good feelings he already had about the Oilers franchise.

“I was very excited to go to Tulsa. They broke me in. It was my first taste of pro hockey and they were a very good organization. I really liked how things were run there and [to] know what to expect for teams to come. It was very beneficial to have got a taste before [training] camp. It made me have confidence knowing what to expect.”

BETWEEN THE SPHL AND ECHL

Tulsa re-signed Wilbur that July for the 2018-19 season. While happy to get an opportunity back in Tulsa, he was released at the end of training camp in October. So, Wilbur packed up his vehicle for the long drive to Georgia to join the SPHL’s Macon Mayhem. Thus began Wilbur’s whirlwind season, playing for multiple teams and putting over 6,000 miles on his vehicle by driving between those teams.

To begin the 2018-19 season, Wilbur netted five goals and 12 assists for 17 total points and a plus-six rating in 25 games with the Macon Mayhem. Photo Credit: Sarah Hobday / The Sin Bin

Wilbur played 25 games with Macon to start the season. He went home to Michigan for the Christmas break before returning to Macon. The team then loaded up the bus for a road trip to Fayetteville and then Roanoke. While in Roanoke, he was called up to Tulsa. I was in Roanoke that night to cover the game and remember how excited Wilbur was for the call-up. But first, he had to ride the bus back to Macon. Wilbur spent about 18 hours on the bus that weekend before loading up his vehicle for the 13-hour drive to Tulsa.

“I was very excited to get the call to return to Tulsa. It was very tiring with the travel, but was 100% worth it. I wanted to play wherever I was given an opportunity; I would have drove 30 hours. Anytime you get a chance to move up, I personally think you need to take it, Even for the experience.”

Sam played six games with Tulsa before being waived and claimed by Rapid City. Wilbur packed up his vehicle yet again and made the 13-hour drive to Rapid City. After eight games there, he was back on the waiver wire. Sam received his release from the Rush just as a massive winter storm was about to hit the area. Not knowing what would happen in the next 24 hours (if he would be claimed or not), Sam had to wait it out in a hotel. By the time the clock stopped on his chance of being picked up by another team, he knew he had to then drive to Fayetteville. Unfortunately, a heavy snowfall had blanketed the area, and highways shut down due to treacherous travel conditions. Sam was stuck at a hotel in Rapid City waiting for the roads to reopen. 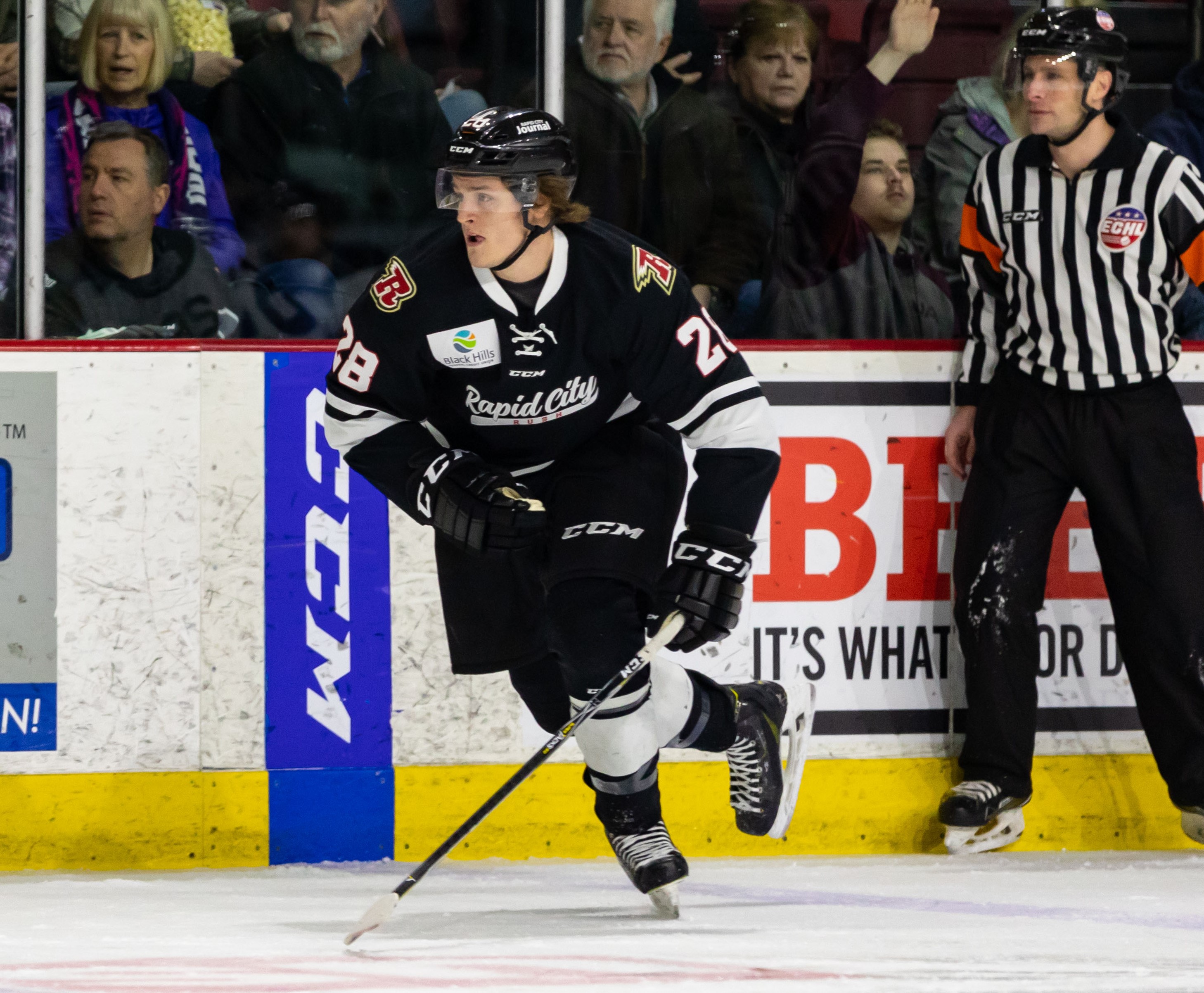 Sam made his debut for the Rapid City Rush on February 15, 2019 against the Idaho Steelheads. Between Tulsa and Rapid City, Wilbur played in 14 ECHL games in 2018-19, notching one goal and two assists in the process. Photo Credit: Noah Saucerman Pitts / The Sin Bin.

“I actually was stuck in a snowstorm for three days. It’s always hard saying goodbye to teammates and to an area where you are comfortable. I was blessed enough that Rapid welcomed me with open arms; [they’re] another great organization.”

After three days of being snowed in, the highways finally reopened, and Sam was able to start his 26-hour drive to Fayetteville.

A FRESH START IN FAYETTEVILLE

Wilbur’s SPHL rights were traded from Macon to Fayetteville as one piece of multiple moves at the trade deadline. Sam talked about that trade:

“My goal was to stay in the ECHL. I knew that Macon had to make moves for playoffs. There were no hard feelings, and I’m actually happy with Fayetteville owning my rights. I just took it as a business move that needed to be made knowing my absence. [I] wish them the best.”

Wilbur arrived in Fayetteville late that Saturday night for an early Sunday afternoon game – no time to practice with his new team. He also had not been on the ice in about six days prior to arriving in Fayetteville. Wilbur talked about how excited he was to be put in the lineup right away, and his nameplate accidentally misspelled as “Wiblur.” 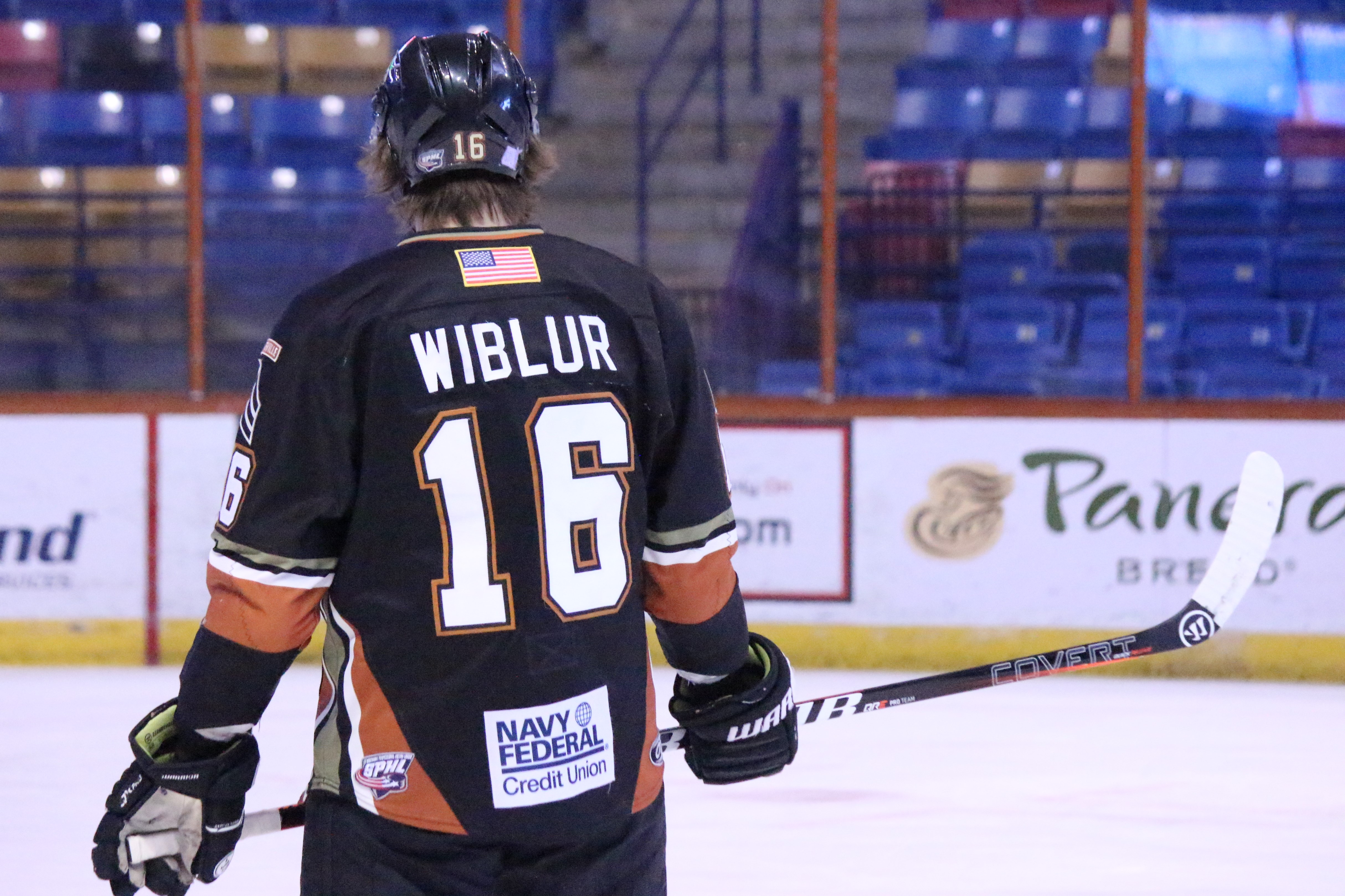 “I was actually pretty tired from the drive, and I got in at about 11 o’clock [pm]. I really wanted to play, even though I had not skated and just traveled. I felt good once I got onto the ice, so then all was well. The nameplate was pretty funny actually. It lightened the room being the new guy. Made me get loose and just have some fun. And that was the first time that has happened to me! Usually, it is ‘Wilber’ with the ‘e’ and the ‘u’ switched.”
I was in Fayetteville covering that early Sunday game on March 17. We had a few laughs as I was on the bench taking pictures during warmups when Sam pointed out his misspelled nameplate. Sam contributed immediately in Fayetteville, notching two assists in that Marksmen win over Quad City. 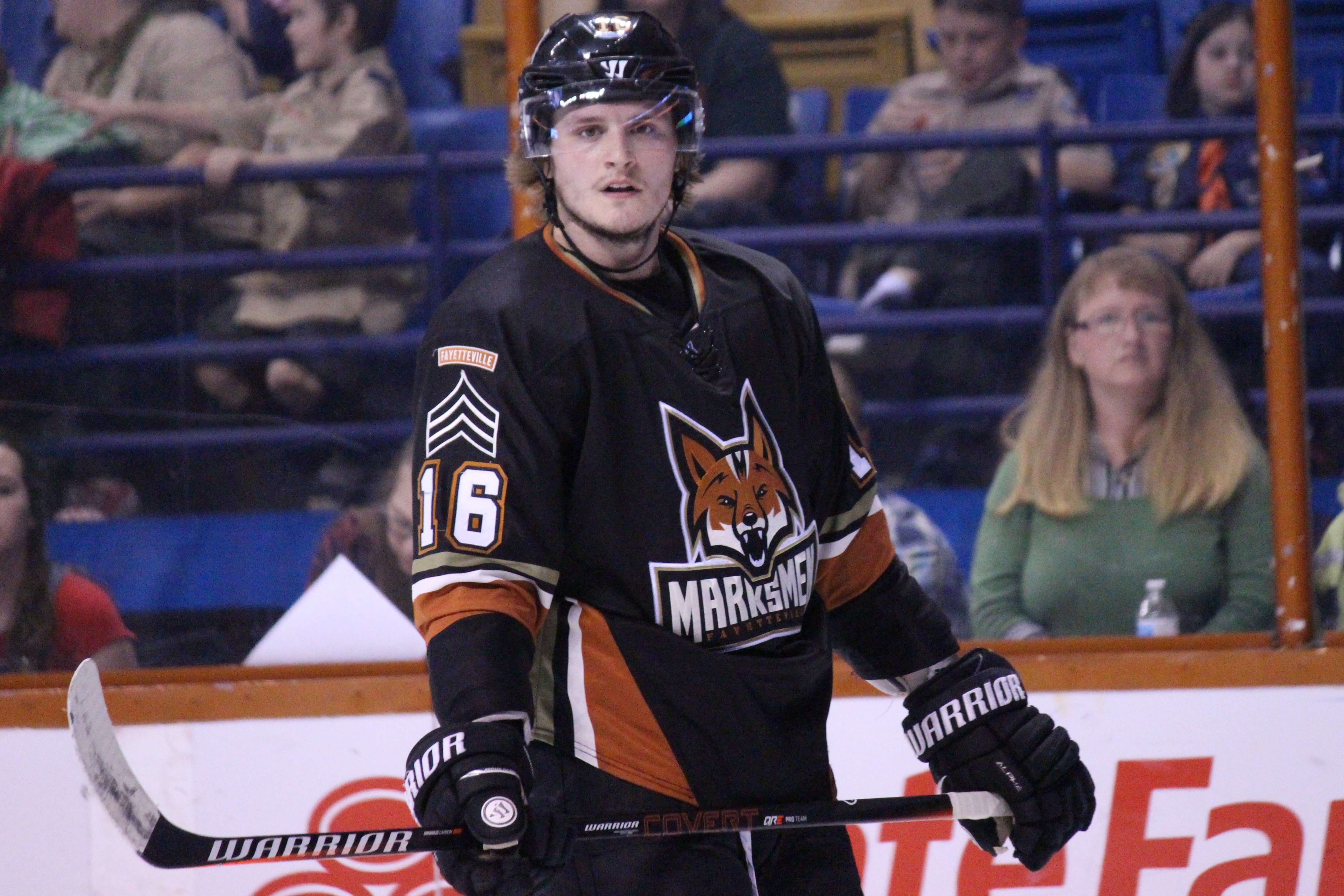 “Coming from college [to] my first-year pro, I did not know what to expect. I was very excited to get the call to go to the next level. As I settled in, I just noticed the speed was faster, but that was something I could transition into. I like playing at a fast pace.”
“The biggest adjustment would have been the games. Going from college – 25 games a year – to almost 70 is a big jump. I’m happy to be able to play that many games in a season, as the games are the most fun obviously. Definitely had to keep my body prepared.”

Wilbur discussed what it was like playing under several coaches and with different teams:
“It was different playing with many different styles of players throughout the year. I’ve always played a power forward role and tried to stay the same on each team. I did not have a problem finding chemistry on either team. Once you are in a high level, everybody plays at a high level. Meeting a bunch of great teammates also made for great memories on the year. Met a lot of great guys that I would play with any day.”
As for his favorite city he played in during the season:
“I really enjoyed playing in Boise, Idaho against the Steelheads. I really liked that barn, and the fans were really into it. They also had a big crowd each night I played there. The city was also really cool to walk around in and had good vibes. A lot different from Saginaw, Michigan.”

Sam discussed his summer training regimen:
“I have taken this summer very seriously. I have switched up my nutrition and have been training every day. I actually started the summer at 18% body fat, and I am currently at 10% and still working hard. I feel very good, and I can’t wait to hit the ice.”
Sam’s summer job is also helping out with keeping him in shape. When asked if he picked up any new hobbies or other ways to fill his free time since leaving school:
“Not too many hobbies really, I have been working construction in the summer while I am home in Michigan. Keeps me busy during the day. I guess you could count that as a new hobby, learning a new trade set!”

ALL THE MILES DRIVEN

Wilbur put about 6,100 miles on his vehicle this past season with driving between all his different teams.
“I actually do like driving a lot. I like to listen to music and hit the open road. It’s sort of my me time. I have always had to travel for hockey, so it always just brings me back to the old days. It’s nice.”
Wilbur continues to work hard this summer in preparation for the 2019-20 season. Will this season bring him more stability, or will he drive even more miles?