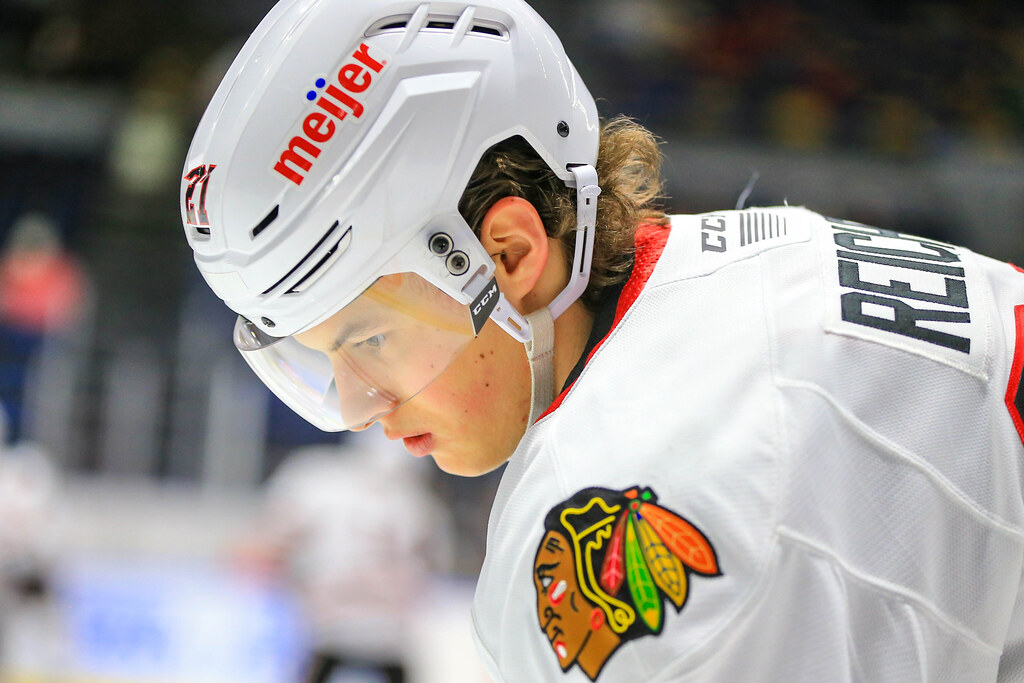 Lukas Reichel Back On Track For The IceHogs

Lukas Reichel was selected AHL Player of the Week after a six-point weekend. (Photo by Brad Repplinger/Rockford IceHogs)

Lukas Reichel Back On Track For The IceHogs

ROCKFORD, Ill.-Rockford IceHogs center Lukas Reichel has missed time with a concussion and COVID-19 issues over the past two months. The Chicago Blackhawks prospect skated in just three games in nearly six weeks before the IceHogs resumed play last weekend.

It’s safe to say that the ‘Hogs rookie returned with a vengeance. Reichel’s six-point performance in a pair of IceHogs victories earned the rookie AHL Player of the Week honors on Monday.

“Of course, it’s an honor for me,” Reichel said at Rockford’s weekly media session on January 11. “It’s not just me; I think it’s the whole team, they step up.”

The 19-year-old Reichel had two goals and two helpers in Friday’s 8-0 win over the Chicago Wolves. He followed that performance on Saturday with a goal and assist in Rockford’s 6-2 triumph in Milwaukee.

“It was two games,” Reichel pointed out. “We played good in those two games, but I want to play consistently over, like, ten or fifteen games. I think that gives me a lot of confidence now, those two games. I just want to keep going like that, help the team to get wins.”

The Blackhawks selected Reichel in the first round of the 2020 NHL Draft. He played professionally in his native Germany for two seasons before coming to Rockford this fall. Reichel has been leading Rockford in scoring for a good portion of the 2021-22 campaign. In 20 games with the IceHogs, he has 11 goals and nine assists.

Reichel’s hat trick vs Manitoba on November 7 led Rockford to a 4-3 win. He suffered a concussion on November 28 and missed two weeks of play. At the time of his injury, he was on a four-game scoring drought. That scoreless run would extend to five games upon Reichel’s return on December 17. It’s the only time this year that he has failed to score in consecutive games.

Reichel was in the AHL’s COVID protocols over the holidays along with nine other IceHogs skaters. Several games were postponed, but Rockford started their January schedule firing on all cylinders.

“The first ten games (of the season), we didn’t play that good, he said. “After that, we came together as a team and now we play really good hockey and fun hockey to watch.”

The IceHogs put in a lot of practice time during the recent downtime. It paid off on the scoreboard as Rockford sent 14 shots to the back of opposing nets over the course of two games.

“We had two meetings about scoring goals,” Reichel admitted. “We watched some videos over the break. We learned from that, and of course we had Brandon Pirri score like three goals (Saturday night). I think the last two games we did a really good job.”

As Chicago’s top prospect continues to make a big impact with Rockford, the question on the minds of Blackhawks fans centers on a possible call-up to the NHL in the near future. There is debate on both sides as to where Reichel can best continue his development.

“The abilities he’s got are obviously lights out,” said interim head coach Anders Sorensen, “but there’s parts of his game that he’s still got to fine tune. It’s more so the play without the puck. I think he’s learning to play, especially as a center. There’s a lot of responsibility there, certain areas you have to make sure you’re positionally sound. He’s making a lot of positive strides in those areas.”

Reichel agreed with Sorensen’s assessment, adding that he has been working on making the adjustments needed to play in North America.

“In the o-zone, puck protection and finding the open space, the open ice,” he explained. “In the corner, the battles. It’s smaller ice, so it’s tougher and I’ve worked on that a little bit. I’ve watched a lot of video of guys like (Patrick) Kane, (Artemi) Panarin, like those guys. They make a really good show of that. I just want to learn from that.”

“On faceoffs, you can do more tricks than in Europe,” Reichel continued. “There, you can’t use your skate or something like that. It’s different, but we have good coaches here, good stuff, so we practice a lot on faceoffs. Center, I played it in Berlin, at the World Cup, the World Championships, so I feel comfortable with that. I like to play center, but if the team needs me at wing or whatever, I play that. That’s up to the coaches.”

The Blackhawks organization is monitoring Reichel’s progress. Time will tell if the talented rookie makes his NHL debut this season.

“We have discussions about his development, the path that he’s on and how things are going,” Sorensen said. Then it’s up to Kyle (Davidson, Chicago’s GM) and Derek (King, the Hawks interim head coach) to make those decisions as we go longer.”

For the moment, Reichel must concentrate on what he can control. Namely, his play on the ice.

“I want to get better and help the team win here in Rockford,” he said. “If they call me up, I will be ready. We’ll see when.”