GLENS FALLS, NY – Over a month after the announcement of Alex Loh‘s departure, the Adirondack Thunder have named their new head coach.  After a committee reviewed close to 30 applications, they narrowed the search down to nine interviewees, but one stood out more than the rest.  That person was Pete MacArthur. 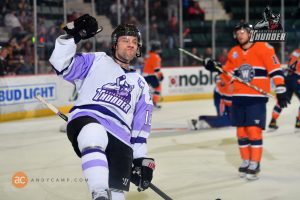 According to committee member and former Adirondack Red Wing Claude Loiselle, there were a few things the group was looking for in a new head coach:

“Mac” met all of these criteria, but most impressive to the committee was his preparedness.  According to Loiselle, MacArthur came into his second interview with a chalkboard and drew up plays that he had already planned out for the team.

Loiselle: “He really did blow us away.  He came in organized and had a game plan in place.”

That same preparedness that earned him the head coaching position will be one of the keys to his coaching style this season.

MacArthur’s playing career ends after 14 pro seasons, in which he accumulated 349 points in 643 regular season games in several leagues throughout Europe and North America, including the AHL.  Mac has served as captain and/or alternate captain for several of the teams he has played for.  He has also gotten some coaching experience the past few seasons, as an assistant coach at Skidmore College during their 2018-19 and 2021-22 seasons, and as a player/assistant coach with Adirondack in 2018-19. 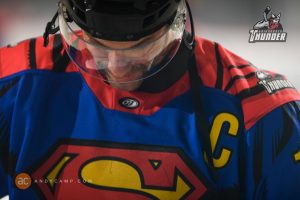 For MacArthur, this latest step in his hockey career is a dream come true.  He’s from the area, growing up in Clifton Park and attending games at the Cool Insuring Arena when it was still called the Glens Falls Civic Center.  He mentioned that he had dreamt of one day coaching in this arena.  When asked what made Adirondack the best market for him to begin his new venture as a head coach, MacArthur responded, “This is home”.

The area is also home to one of Adirondack’s first signings, Jeff Taylor, also from Clifton Park.  The defenseman played for Union College in nearby Schenectady, New York, before starting his pro career in 2017.  Taylor has seen action with several AHL and ECHL teams.  In 96 games with the AHL’s Wilkes-Barre/Scranton Penguins and Hartford Wolfpack, Taylor has 15 points.  He also has 37 points in 66 games with the ECHL’s Wheeling Nailers, Maine Mariners, and Jacksonville Icemen.  The 2021-22 season was split between Hartford (18 games, 2 points) and Jacksonville (10 games, 8 points).

The Thunder have also signed veteran forward Colin Long, who returns to Adirondack after an injury-plagued 2021-22 season.  Despite missing more than half the season due to injury, Long was still able to pick up 21 points in 33 games.  Much of his career was spent in Europe, where he amassed 213 points in 238 games.  Long also has AHL experience with the San Antonio Rampage (34 games, 4 points) and Portland Pirates (19 games, 8 points).

It is not yet known if Pete Dineen will remain in his role as Associate Coach.  MacArthur will be choosing his own staff, including coaches, athletic trainer, and equipment manager.