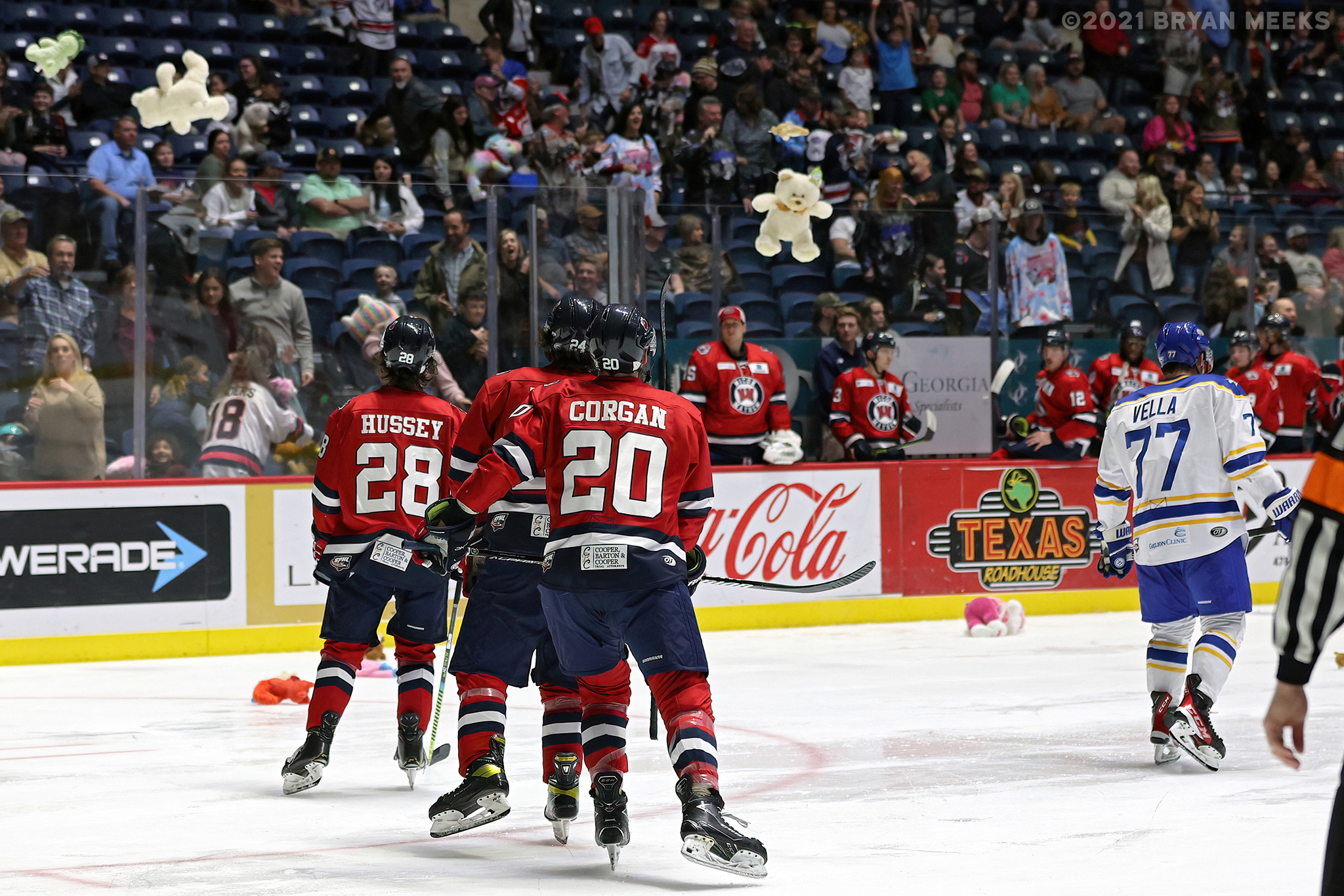 MACON, Ga. – Welcome to Makin’ Hockey, a periodic look at what’s ahead and also what’s behind for the Macon Mayhem.

Friday, Dec. 10 vs. Roanoke: Macon got a bit of a break before this two-game weekend series at home even started when Roanoke announced that it’d be without five players at the last minute for undisclosed reasons. In a tentative contest, Macon’s scoring woes continued in being shut out for the second game in a row. Austyn Roudebush, Roanoke’s goalie who so masterfully kept opposing teams out of the net last year with Knoxville, gave Mayhem fans a case of deja vu, stopping all 23 shots. As a whole, it wasn’t the worst of nights for Macon, but that became undone in a 40-second stretch of the third in which a pair of shots got by Mayhem goalie Dillon Kelley. That, combined with a late empty-net goal, gave Macon the loss.

Saturday, Dec. 11 vs. Roanoke: Fears of ‘how do we throw teddy bears on teddy bear toss night if there’s no goal scored’ were doused in the second period, when Chris Hunt snaked the puck past Roudebush for not only a game-tying goal but one that unleashed teddy bears to be thrown on the ice that were donated to local organizations.

It was a big win for the @MaconMayhem on Saturday, but an even bigger win for our patients! Thanks, Mayhem fans for donating…and throwing bears onto the ice during the Teddy Bear Toss, and thanks to Mayhem players, coaches, and staff for stopping by to donate them! 🏒 🧸 pic.twitter.com/aIVTSm9kdk

Hunt’s marker seemed to stir things up on the Mayhem bench, and Macon came alive offensively, resulting in not only a score early in the third by Cody Rodgers, but a pair of go-aheads by Tyler Becker 19 seconds apart, turning a tie game into a 4-2 Mayhem lead that’d end up being the final score.

First and foremost, Macon got its offense back going. Becker’s two goals were the first as a pro, and few things help a team with young players than to have those players find success. It does not hurt for a team that was coming off a scoring slump to put a few on the board either.

Macon also got strong netminding play against Roanoke, giving up a combined four goals with both goalies being in the crease – Kelley on Friday and Michael Stiliadis on Saturday. There didn’t appear to be much dropoff regardless of who was in net, and that’s a good thing going forward as one of the continuing unknowns in the SPHL is if or when a player will be called up to the ECHL.

Mayhem head coach Zac Desjardins has a teachable moment from Friday’s game. If you only count 57 minutes, Macon probably at least goes to overtime and gets a point in the standings. Rather, the Mayhem fell short thanks to a brief lapse, and it’ll be an illustration to point to as to why every shift is important over the course of a game.

Macon is currently 3-4-0 in the standings with seven points and in tenth place, ten points behind eighth-place Roanoke.

Given Desjardins time previously with the Oilers in the ECHL, it should come as no surprise that the unofficial Macon to Tulsa pipeline continued this week with Bryan Etter being loaned to Tulsa.

Macon plays its final home game until Jan. 13 on Thursday in hosting Fayetteville prior to a pair of contests on Friday and Saturday at Knoxville. The Mayhem are winless against both this season, but most recently played the Marksmen Nov. 20 and the Ice Bears Nov. 13. This weekend should tell us a lot about how much the Mayhem have improved since then.