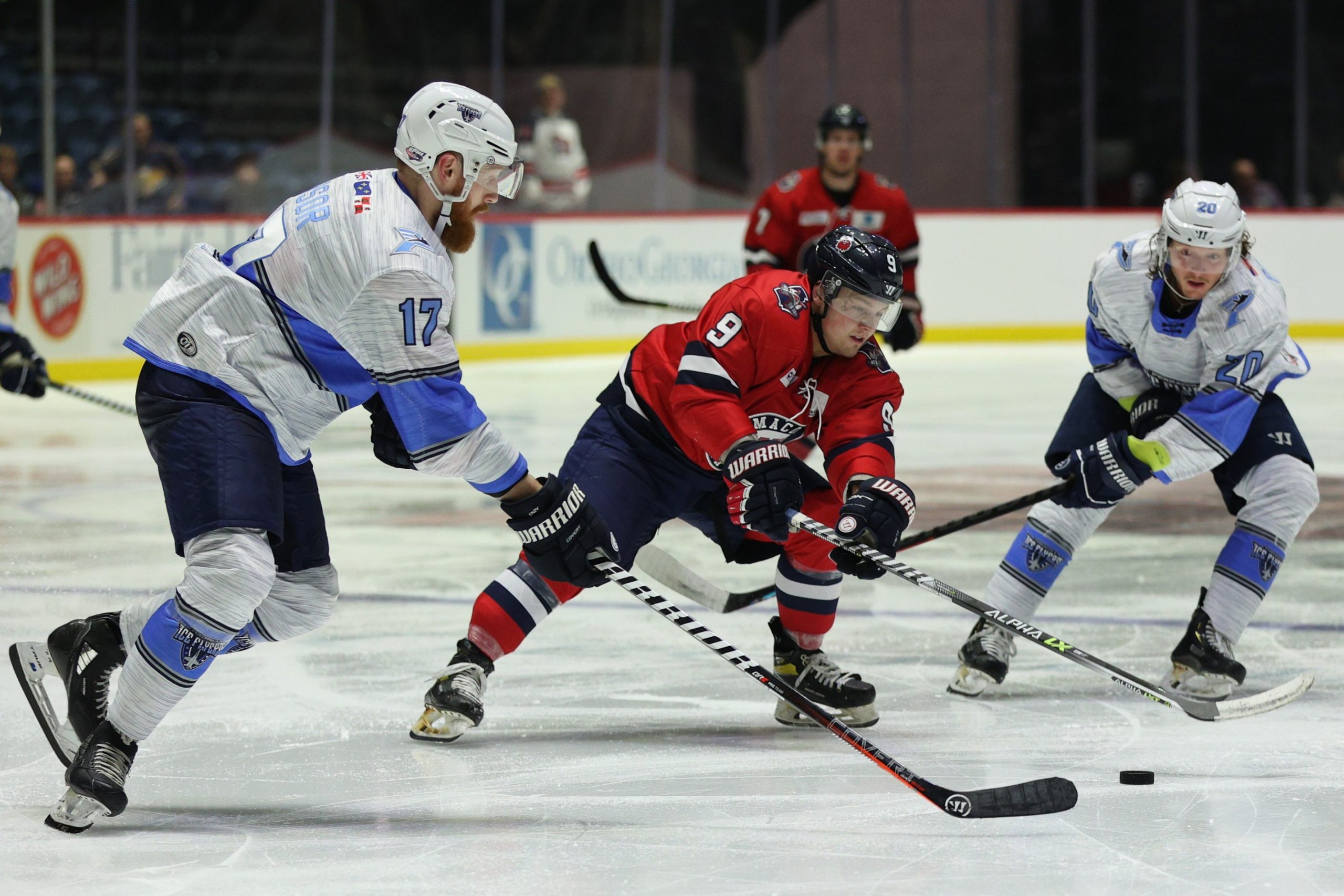 MACON, Ga. – Welcome to Makin’ Hockey, a look at what’s behind and what’s to come for the Macon Mayhem.

The Mayhem are coming off of being swept in last weekend’s home-and-home against Pensacola, giving them an overall split in Macon’s last four games.

Thursday, Dec. 2 vs. Birmingham: Coming off their first win of the season, the Mayhem made it two in a row at Birmingham, going on the road to take a 3-o win. Dillon Kelley, despite his team being outshot 38-26, got the shutout as Macon used a first-period goal by Zak Lambrecht that was enough to win. Brendan Hussey, who assisted on the first goal, added a second-period tally before a Cody Rogers empty-netter made it 3-0 for the final margin.

Friday, Dec. 3 vs. Pensacola: As good as the previous two-game results were for Macon, last Friday in Pensacola was a polar opposite. A Devin Brink unassisted goal in the first period was sandwiched around three Ice Flyer goals to ignite the home crowd, and things unraveled even more from there with Pensacola tacking on one goal in the second and three more to finish things off and win 7-1.

Saturday, Dec. 4 vs. Pensacola: In the first contest in Macon between the teams since last year’s President’s Cup Final, Michael Stiliadis got his turn in net. He had the Mayhem in good position through most of the first period before a score in the closing seconds made the Pensacola lead 2-0. It ended a first period in which Macon didn’t get much going offensively thanks to time spent in the penalty box with five minor penalties being called against the Mayhem. Any time you spend that much time in the penalty box, it’s tougher to generate scoring chances, and that showed for Macon, which allowed a single goal in the second and third to fall 4-0.

When a team has problems winning games, bright spots are hard to find. But for Macon, its penalty kill unit was exceptional in recent games. In their last three games, Macon has killed off six out of nine opposing power plays, and two of those of which a goal was scored came in Friday’s lopsided win.

The biggest thing, and its something that head coach Zac Desjardins will mention, as well – consistent effort. That’s something that when you have a roster without a lot of talent on this level can be, at least to start with, hard to put together a full 60 minutes of good hockey That was glaring in Saturday’s loss to Pensacola, where a bit stronger finish to the first period would have kept it at a 1-0 game. Macon was outshot in that first period, 13-4 but reversed that the rest of the way. Macon has shined in spots but needs it all to come together.

Macon is currently 10th in the SPHL standings with a record of 2-13-1 with 5 points, nine points out of eighth place at this time.

Within days of helping Macon beat Evansville, defenseman Kyle Soper was loaned to Tulsa. Since then, a handful of players have arrived and departed. Defenseman Brett Menton and forward Mike Swiderski have been waived with Chris Hunt and Chris Corgan being signed to standard professional contracts.

It’s a reunion with another team that Macon has not played since the 2019-20 season with Roanoke being in town this weekend for a pair of games on Friday and Saturday. If you can’t be there in person, both will have the game broadcast available on the FPH app.

Saturday is Teddy Bear Toss night, as Macon fans are obviously hoping that it’s not an offensive repeat of recent games against Evansville and Pensacola, where Macon was shutout. Look for the Mayhem’s back end to be tested against the Railyard Dawgs, a team that when its having a good night, it has a really good offensive night. In Roanoke’s last four games, it has scored five or more goals twice but has also been held to two goals or fewer twice. On Nov. 24, for example, Roanoke trailed 2-0 after a period before five unanswered goals were the difference.

It’ll be a north vs. south crossover this weekend in the SPHL with Birmingham going to Vermilion County, Pensacola going to Quad City, Knoxville going to Peoria, and Huntsville going to Evansville.