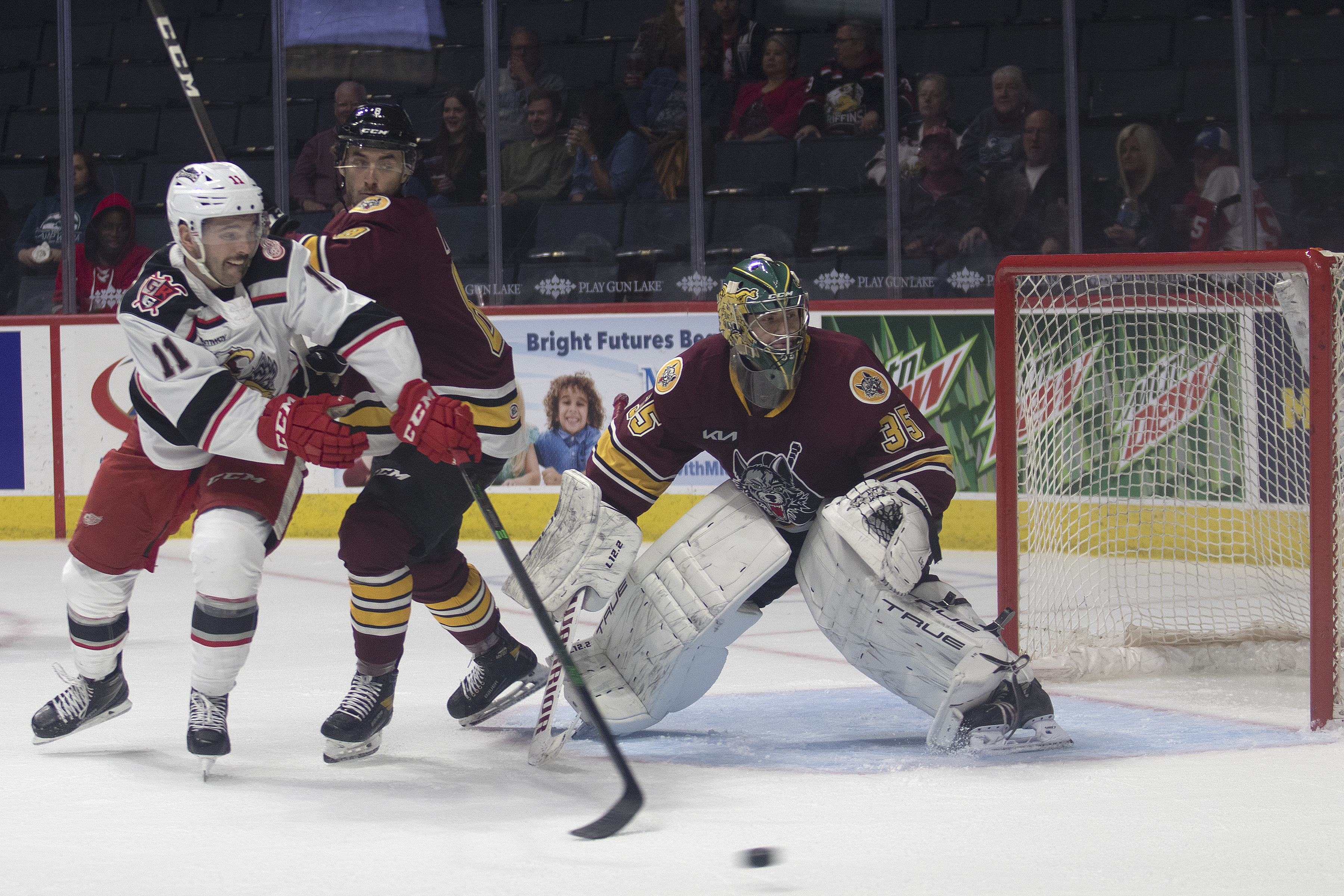 GRAND RAPIDS, Mich. – Wednesday night marked the first game of a week of vastly different travel itineraries for the Chicago Wolves and the Grand Rapids Griffins. The Griffins are beginning a three-game homestand, and the Wolves are playing their first of a three-game road trip, both culminating in a Halloween rematch between these two clubs.

Wednesday also set up a matchup between two teams heading in different directions, with the Wolves impressively winning their last two games over the Milwaukee Admirals. At the same time, the Griffins have dropped three straight to those Admirals and the Manitoba Moose. Early on, it was imperative for both clubs to make good impressions and get a head start on their division rivals.

Calvin Pickard was starting in goal for the home team, going up against Chicago’s young Finn Eetu Mäkiniemi, making his second start in North America. Assistant captain Kyle Criscuolo also made his debut this season after missing the Griffins’ first four contests with an injury, looking to give the home team a scoring boost that’s been lacking on their recent road trip.

“Just going out in warmups and seeing people on the glass again, having a lot of people in the building tonight” Criscuolo said. “It was awesome to have the fans back. Hopefully we can get back on track and give them a lot more to cheer up coming up.”

The puck went down, and the first of twelve meetings between these two teams this season was underway.

From the opening faceoff, the Wolves grabbed this game by the throat. They hounded after loose pucks, took possession, and never seemed to let it go. Shots peppered in on Pickard included an in-tight chance from Stefan Noesen that had to be battled away.

The Griffins didn’t seem prepared out of the gate and struggled to get their legs underneath them as the Wolves circled their net with opportunity. The tenacity of Chicago’s attack drew a power-play opportunity, and CJ Smith would fire a shot from the point that beat Pickard and, just five minutes in, gave the Wolves a 1-0 lead. Smith’s goal would give him one in each of Chicago’s first four games to open up this season. The goal also marks at least one power-play goal for the Wolves in each of their games played so far.

You tell us, is this:
1. C.J. Smith's 4th goal of the year
OR
2. Jack Drury's 1st North American pro goal pic.twitter.com/fwAxXIVjX7

As the period continued, Chicago continued to find its rhythm. They carried the pace of play, dictating flow through the neutral zone and offensive zone time with little impediment from the Griffins. Besides a rush chance from Joe Veleno on a partial breakaway, Mäkiniemi was rarely tested in the opening frame, while Pickard routinely had to battle against quality chances. The Wolves’ goalie was impressively composed when he was tested, making difficult shots look easy to snag with his glove and smothering rebounds for no second chance opportunities.

With under two minutes to go, yet another offensive zone faceoff would be won by Ryan Suzuki right in the wheelhouse for David Gust, who made no mistake in firing a bullet past Pickard off the draw. That gave Chicago a lead heading into the intermission that felt like much, much more.

Grand Rapids failed to respond much coming out of the break, as the opening five minutes of the middle frame were spent almost exclusively in their own zone. A disorganized Griffins team that broke down on their defensive assignments nearly yielded goals to Stelio Matheos and Gust again, forcing Pickard to come up big to keep the Griffins within striking distance in this one.

Grand Rapids, however, would finally get their chance to claw their way back in with back-to-back minor penalties assessed to Andrew Poturalski and Spencer Smallman. The Griffins would get their best look in a jam play in the crease, but again the composure of Mäkiniemi standing tall in his crease keeps the puck out.

Once the Wolves returned to even strength, it was right back to their game of dominant puck possession and winning the battles along the boards, outworking Grand Rapids for those chances. The Griffins continued to chase until the buzzer mercifully ended the period with a 26-17 shot discrepancy favoring the Wolves.

A moral victory could be had for Grand Rapids to escape without increasing their deficit. Still, little could be found to be confident in their game beyond Pickard heading into the second intermission. Grand Rapids had 20 minutes left a needed a big effort to turn this one around late.

Grand Rapids finally looked to maybe find their groove early in the third, and their initial push had the Wolves on their heels even for the first couple of minutes.

Their best chance came just a few minutes into the period when Wyatt Newpower cut in alone on his backhand, but he couldn’t find the five-hole through Mäkiniemi, who made another big save to preserve his team’s lead. Following an early power play for Grand Rapids, their hopes for a comeback were severely hampered by three straight minor penalties in the final frame that ate up all the momentum they tried to work for.

In that middle power play, Poturalski fed Jack Drury in the high slot, who made no mistake in wiring a shot past Pickard for his first AHL goal and the Wolves’ second power-play goal extending the lead to 3-0.

The Griffins’ strongest consistent effort came in the final two minutes with their last gasp to try and claw their way back in and – if anything else – save some pride for the score sheet.

Chase Pearson led the way with a shorthanded breakaway in the closing minute, but Mäkiniemi again slammed the door shut. That chance would be followed by a couple more looks from the Griffins, but Mäkiniemi stood tall to the task, refusing to give up on the play even as the final seconds ticked down to a foregone conclusion.

Nice doin business with ya, GR. ?

The 25th Griffins shot on his net would be stopped, the puck would be cleared, and the final buzzer sounded with Eetu Mäkiniemi collecting his first shutout in North America standing up in a 3-0 win on the road.

As impressive as Mäkiniemi was in making the necessary stops for Chicago, the Griffins made it far too easy on him. The traffic in front wasn’t there, the puck movement didn’t get the Wolves’ goalie moving, and at the end of the day, the effort by Grand Rapids just wasn’t good enough, and Criscuolo said just as much after the game:

“We kind of were caught by surprise to start the game. We weren’t really ready to start the game.  [Mäkiniemi] played well but I didn’t think we got in his face at all, we didn’t make it hard for him. We got some stuff to work on.”

For Chicago – it was as perfect a game plan for a road game as they could ask for. Their special teams clicked on both ends – two power-play goals for and a near flawless penalty kill against a potent Griffins power play. The tandem of Alex Lyon and Mäkiniemi in net gives the Wolves one more checked box in the “strengths” vs. “weaknesses” of this team and has to inspire confidence, especially when this team comes out giving the effort that they do.

For Grand Rapids – the effort just has to be better. The drive wasn’t there on Wednesday night, and idle feet caught up quickly for a team that simply didn’t arrive at the game on time.

“We could try showing up at 7 o’clock instead of 8 o’clock.” Coach Simon said of making the game harder for Chicago. “We still have firm belief in the group we have here, but I don’t care what group you have: if you don’t show up, you don’t work, you don’t compete for 60 minutes, you’re not going to win. I don’t care how talented you are. As a player, you either want to do the job or you don’t.”

These last four games have put the excitement of opening night far into the back of the mind for Griffins fans out there. It’s definitely not time to hit the panic button this early in the season, and there are always different angles to attack a game plan, but coach Simon perhaps had the best question post-game: can you teach heart? The most flawless practice and the most prepared team won’t matter if the players don’t want it. Grand Rapids has a couple more games at home to close out this month of October before getting into the meat of their schedule to show the Central Division what kind of team they aim to be with the effort they can put up this weekend.

Both teams have dates with the Milwaukee Admirals this weekend ( Oct. 29 CHI @ MIL, Oct. 30 MIL @ GR) before having a Halloween rematch back in Van Andel Arena on Sunday afternoon.