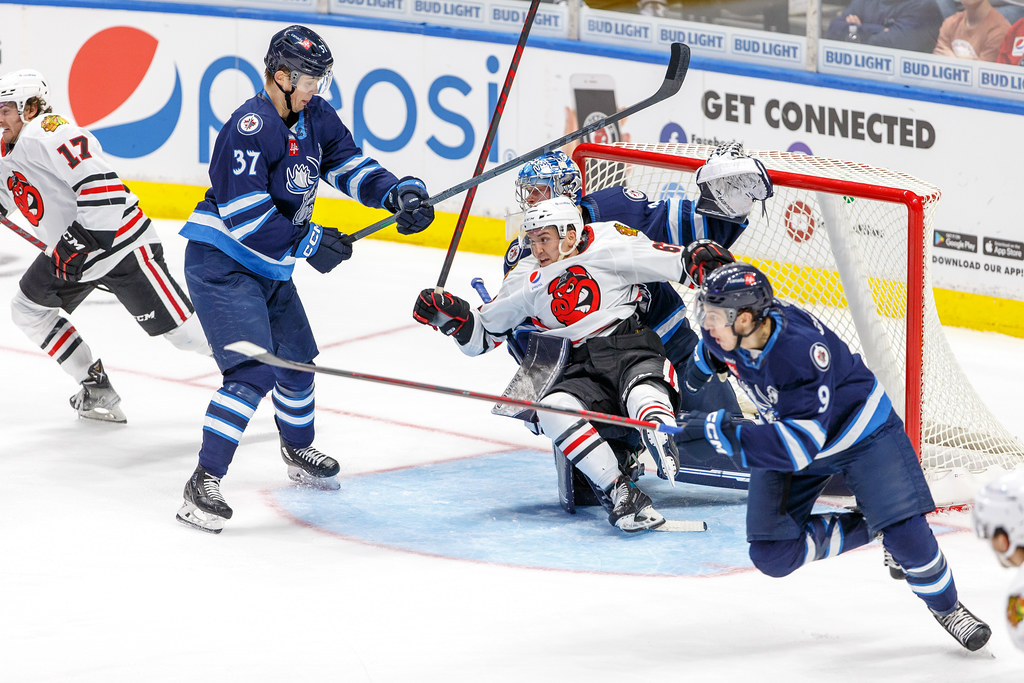 Rockford, Ill. – The Rockford IceHogs were looking to get back on a winning track Sunday afternoon The opponent was a Manitoba Moose squad playing their third-straight game. The Moose showed little signs of fatigue at the BMO Center, riding a four-goal second period to a 6-3 win.

Manitoba finished the weekend with wins over three Central Division rivals (Chicago, Milwaukee, and Rockford), while handing the Hogs their third-straight defeat. The Moose move to 4-0-1 and to the top of the division standings. Rockford is now 0-3 since besting the Moose in overtime October 15 in Manitoba.

The IceHogs got off to a solid start, attacking the Manitoba net and scoring the first goal of the game. It came off the stick of Brett Seney, who buried home Lukas Reichel‘s feed 4:04 into the game. The Moose surged in the latter stages of the first period, tying the contest at the 18:03 mark. Jansen Harkins gathered in a rebound of Ville Heinola‘s initial shot and beat Rockford goalie Dylan Wells to the twine.

Jeff Malott put Manitoba up 2-1 at 6:41 of the second period. Eight minutes later, Henri Nikkanen scored to put Rockford into a two-goal hole. The wheels came off for the IceHogs in the final five minutes of the second.

Two Rockford penalties gave the Moose a chance to put the game out of reach. They did just that, needing just seven seconds to convert on a Buddy Robinson interference penalty. Declan Chisholm sent a slap shot past the glove of Wells at 15:29 for a 4-1 Manitoba advantage.

Shortly thereafter, Reichel sent a puck over the glass for a delay of game penalty. At 17:09, Kevin Stenlund scored his second goal of the season and put the IceHogs down 5-1 heading into the second intermission.

Rockford was able to mount a response in the third period, picking up a Luke Philp goal and Seney’s second of the game, sandwiched around a Mikey Eyssimont tally for Manitoba.

“I think we’re a really good team if we skate,” Sorensen said. “When we get away from that, we’re just like any other team. We’ve got to skate. We did that in the third and when we started doing that, I think we played real well in the third.”

Seney’s two-goal night earned him First Star honors in a losing effort. Eyssimont had a goal and two assists in being named Second Star. Reichel was Third Star on the strength of two assists. Heinola also recorded two helpers in the contest.

Wells had a rough night, giving up five goals on 21 shots before being lifted for Jaxson Stauber to start the third period. At the other end of the ice, rookie Oskari Salminen went to 3-0 on the season with the win, with 28 saves on the afternoon.

The Moose complete a three-game road trip and are back in Manitoba for their next six games. They are in action this weekend with two games against Iowa. Rockford has the week to prepare before hosting Chicago and Bellville on Friday and Saturday.