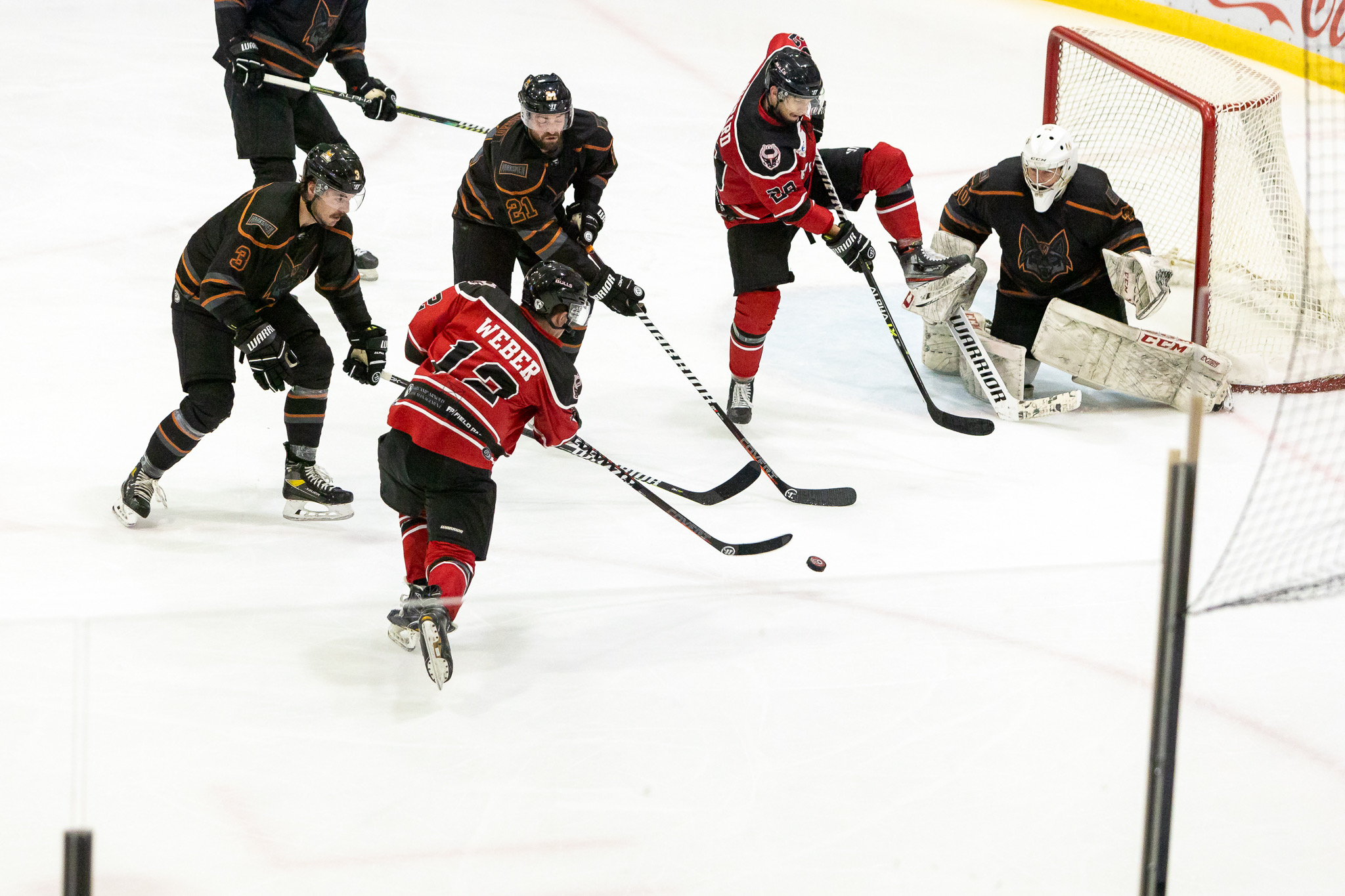 PELHAM, Ala. – The Fayetteville Marksmen traveled to Pelham to take on the Birmingham Bulls Friday night. This night was the debut of new Associate Head Coach Kevin Kerr. It was announced late Thursday that the vacant coaching position was finally filled, and Birmingham fans couldn’t have been more excited to see a former Bull behind the bench with Head Coach Craig Simchuk. The Marksmen, however, didn’t seem to care who was on the bench or what was going on in Birmingham. Fayetteville beat the Bulls 2-0 in the first of two matchups between the teams this weekend.

When things got rolling in the first period, you could sense a change in the Bulls. They came out full of energy and looking to get that early goal. The stellar play of Jason Pawloski in net for the Marksmen made sure that the Bulls would stay off the scoresheet throughout the first period. Hayden Stewart matched his counterpart in net and stopped all seven of Fayetteville’s shots. When the horn sounded to end the first, things were still all locked up at 0.

The second period didn’t get off to a great start for Birmingham. Matt McNair of Fayetteville took the puck at center ice, battled his way to the net in a 1-on-1 with a Bulls defender, and somehow found a way to sneak the puck past Stewart to give the Marksmen a 1-0 lead 57 seconds into the period. Despite not getting any goals themselves, the Bulls did see their fair share of chances in the second period. Mike Davis hit the post midway through the period in what looked to be a goal at first glance, but the lamp never lit up. Kasey Kulczycki couldn’t get the puck to settle down in pass across the front of the crease not once but twice, missing a wide-open net. When the second period finally came to an end, the Bulls found themselves down 1-0 and trying to find a way to solve the Fayetteville defense and goaltender Jason Pawloski.

The Marksmen shut things down defensively in the third period and focused all their attention on keeping the Bulls from tying it up, so much so that they only registered three shots on goal in the final frame. Birmingham, however, did get some high-quality chances off their 12 shots on goal in the period. Davis rung one off the crossbar once again, and Pawloski was grateful that the crossbar had his six. With 2:04 remaining in the period, the Bulls headed on the powerplay after a slashing call on Francois-Xavier Girard. Coach Simchuk would use his timeout to organize a plan with his powerplay unit. When the puck dropped, the Bulls opted to pull Stewart and give themselves a 6-4 advantage. The first minute of the powerplay was somewhat successful, with the Bulls generating some decent chances. With just over a minute remaining, Fayetteville’s Taylor McCloy sent the puck sailing from his own blue line towards the empty net and scored the goal that would seal Birmingham’s fate for the night.

Even in the loss, there were a lot of bright spots for this Bulls team. For starters, the most penalized team in the league only registered two penalty minutes which is huge for a team struggling to find the back of the net lately and doesn’t need to be playing short-handed. In the loss, Stewart stopped 14/15 shots and has now only allowed one goal in his last two starts. Rookie Carson Rose also returned to the ice after a scary hit when they last played Knoxville on December 3rd, which sent him into concussion protocol.

Next up for the Bulls is a rematch on Saturday night with the Fayetteville Marksmen in Pelham. This will be the fourth matchup between the two teams this season, and Fayetteville leads the season series 2-1