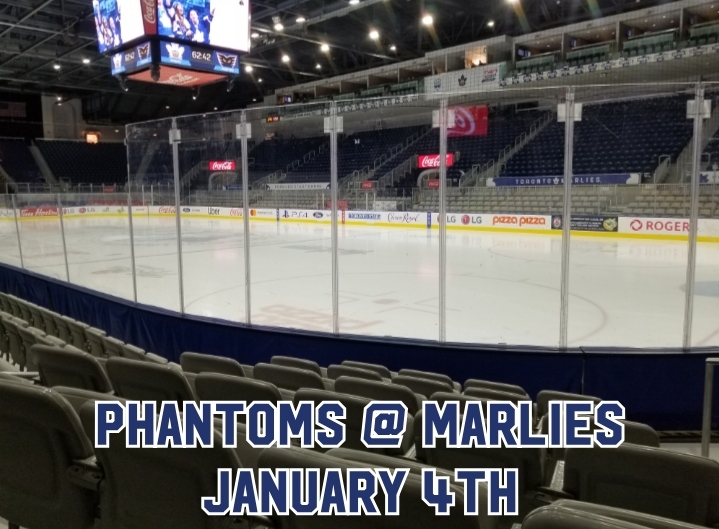 Marlies Caught Watching the Phantoms of the Opera

TORONTO – It’s a tale of two different clubs. The Lehigh Valley Phantoms are sitting near the bottom of the AHL and have dropped their last six games (2-8-0 in their previous 10). Meanwhile, the Toronto Marlies have positioned themselves near the summit of the league and are fresh off a win against Rochester.

Marlies Caught Watching the Phantoms of the Opera

TORONTO – It’s a tale of two different clubs. The Lehigh Valley Phantoms are sitting near the bottom of the AHL and have dropped their last six games (2-8-0 in their previous 10). Meanwhile, the Toronto Marlies have positioned themselves near the summit of the league and are fresh off a win against Rochester.
But going into this game, all that means nothing.
Joseph Woll got the nod for the Marlies in net Sunday. Woll has been steady throughout his rookie season, posting a 0.890 SVS%. Meanwhile, Lehigh Valley finished the Canadian circuit with Alex Lyon. Lyon let up five goals in yesterday’s game against Belleville and has published a 0.913 SVS%.
This game marks the third in three days for both clubs.

SOMEBODY START THE CLOCK, WE’RE UNDERWAY!

With over eight minutes gone in the first, the Phantoms found twine first. Making an exceptional drop pass, Kurtis Gabriel found Gerry Fitzgerald and buried his eighth point of the year.
Later in the period, a falling Pascal Laberge gave Lehigh Valley the 2-0 lead. Receiving a cross-crease pass, Laberge threw a knuckler towards Woll over the blocker. With the Phantoms being the least proficient scoring team in the AHL, they had a clear cut 2-0 stranglehold on Toronto.
With under a minute to go in period one, Woll made a jaw-dropping save, sprawling across the crease and getting his glove on the line to make the save. The save gave Toronto an energy boost, which led to a positive rush down the offensive zone. Although the Marlies didn’t find the scoresheet, it was the first sign of life that Toronto gave throughout the period. The shots after 20 showed 15-9 for the visitors.
Toronto kept on the pressure to begin the second segment of play. With the Marlies outshooting their opponent 4-1 through the first 4:30, Lehigh Valley’s Lyon kept the Phantoms in the game.

Back-and-forth chances held throughout the second period as both Lyon and Woll kept things under control. If Toronto played the same was they did through the opening stages, the game may not be as far out of reach as they thought. The Marlies registered the least amount of shots per period, a stat that needed to change in the third period.
To start the third, it took all of 61 seconds for the Phantoms to find netting. On the doorstep, Connor Bunnaman found his third of the year. The goal very quickly could have been the end of the Marlies, but that wasn’t the case.
Just over two minutes later, Timothy Liljegren broke the Lyon seal and made it a two-goal game. His slot redirection goal from Tyler Gaudet pushed him to eight points in his last seven games played.
Besides the fans singing “Shout” by Otis Day and the Knights, I didn’t see much of any energy from anyone in to finish off the third period. Though technically there weren’t any mistakes or an abundance of turnovers, the Marlies went over six minutes without a shot in the third.
But maybe that small energy boost from the 5,273 was enough for Toronto to climb back. Giovanni Fiore found the pass near the sideboards on a delayed penalty and scored the Marlies second goal on 26 shots. Fiore is on a PTO with the Marlies after spending the beginning of the season with Rapid City in the ECHL.

The empty net with well over two minutes to go and a timeout wouldn’t be enough for Toronto to climb back into the game. Morgan Frost would finish the mission on a rough turnover by Jeremy Bracco to capitalize on the empty net and put the final nail in the coffin for Toronto, moving Lehigh Valley to a 4-2 victory.

The Marlies looked drained throughout the three periods and never had a sense of urgency throughout the game. Being down 2-0 for most of the game, Toronto waited for the final five minutes to start the drive. When asked about it, Head Coach Greg Moore told the media:

“I think naturally for any team when your up against in the third period, every team is going to push harder than what they had.”

The result pushed them to a loss in four of the last five and given them a 3-7-0 record over the previous 10 games. Moore told the media that the team had had little practice and high expectations.

“The team is processing a lot of changes in the last month and a half. I’m a new coach, and I’m asking them to do different things, they’re working through it.”

For Lehigh Valley, this was a big win. The team looked like a whole new club. After giving up 24 goals in their previous six losses, scoring four goals in a win against Toronto was a big feat. They capitalized on a team that looked to have no drive to score and little desire to win.
Toronto’s next game comes in Cedar Park against the Texas Stars on January 10. The game will be broadcast live on AHL TV at 8:00pm EST.