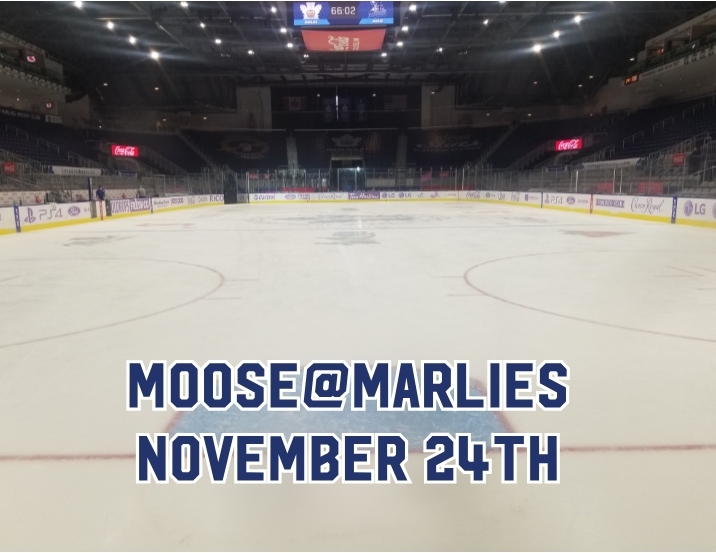 TORONTO – There’s this confident swagger about the Marlies; they know they’re hot.

TORONTO – There’s this confident swagger about the Marlies; they know they’re hot. Walking into this game, they sat second in goals for per game, have yet to lose at home (winning all eight games), and they’ve won five straight games.

One small change for the Marlies heading into this contest. Michael Hutchinson, who has a 0.942 SV% in the American Hockey League this season, will back-up for Joseph Woll. Woll gave an eye-opening AHL debut on October 12 against the Moose, recording a shutout in a 4-0 decision. The Manitoba Moose chose to stay with Mikhail Berdin.

The first ten minutes of the game looked somewhat back-and-forth, but the shot sheet read otherwise. Manitoba led on the shot sheet, 12-3. Surprisingly, Berdin seemed slightly off. During the TV timeout, Berdin was the only player that stayed on the ice. The native of Russia remained in the middle of the ice for the full duration of the time out. 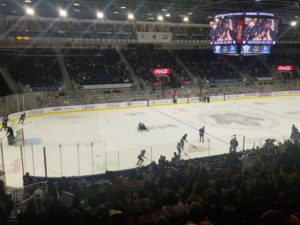 That TV timeout turned out to be the turning point in that period. Former Head Coach Sheldon Keefe was never a fan of the timeout, but after that quick stoppage, the Marlies dominated play in the offensive zone and created good chances throughout (including shots from Jeremy Bracco and Kristians Rubins).
The first period finished the same way it did Saturday — tied. Manitoba finished the period with a strong possession, and the Marlies looked simply out of gas.

“I think we were a little slow. We wanted to get pucks up quicker.”

The second period picked up where the first left off — total Moose control. But with 14:24 left in the second, the Marlies generated a buzz. They were able to get set up in the offensive zone. Bracco made the initial shot, but parked out in front with the meter running was Kenny Agostino, who tipped the point blast. Manitoba native Adam Brooks also got an assist on the goal.
The goal wasn’t even finished being announced when Pontus Aberg directed a pass towards the net, finding Tanner MacMaster. MacMaster took a couple of wacks at the puck and finally got enough of it to bury it pasted Berdin. MacMaster now has points in six consecutive games.
With under five minutes left in the middle period, at every whistle, you could see the Moose looking skyward. It seemed impossible to beat Woll. After two power play chances couldn’t finish, Woll’s confidence continued to grow.
With seconds dribbling down in the second, Garrett Wilson made a forehand-to-backhand play in front of the net, but couldn’t find twine to get the Marlies up by three (FYI: Toronto came into this game 8-0 when leading after two periods. Additionally, Woll had stopped 48 consecutive shots from Manitoba).
Early in the third, the Moose found composure on the power play and generated a spark on the advantage. Jansen Harkins managed to find an open hole to beat Woll to begin the period. The goal was initially waved off, but after some time in a huddle, the referees called it a goal.

Moose get on the board. It's 2-1
Clipped with @SporfieMoments pic.twitter.com/yhvNFw58X1

The glove of Berdin stopped the Marlies for the first half of the third. Toronto doubled Manitoba’s shots in the first half, only to be shutdown by Berdin. Collectively, every jaw in the Coca-Cola Coliseum dropped after this masterful save.

Somebody call the cops, the Marlies have been robbed!
Clipped with @SporfieMoments pic.twitter.com/DxPOnTi3IU

Toronto has drawn the fewest penalty minutes per game this season. With only 175 total penalty minutes, the Marlies only average nine minutes of power play time in a game. That in mind, the Marlies’ eighth-place power play went to work with 3:27 left in the third. Up to that point, the Marlies stayed back and worked on things defensively to maintain the lead. The top ten power play unit struck late in the kill to put the Marlies up by two. Agostino made an excellent keep in from the line, then spun a pass to Aberg, who recorded his ninth of the season.
Teemu Kivihalme would add an empty-netter to seal the deal. The goal would prove to be his first AHL goal. After the game, he spoke to the media and was all smiles:

“It would be nice to score on a goalie, but that’ll come here shortly.”

The Marlies proved once again that they could dominate in the second period. As mentioned in my previous piece, they lead the AHL in second period goals, something they can ride off of. Keeping the Moose off the scoreboard and holding down the fort in the first gave them the confidence to go out and score two big goals in the second.

“When we stuck to our plan, we were opportunistic”

On the other hand, Manitoba’s game was strong today despite the loss. The game looked like the best game that they played against the Marlies all season. Sometimes, the best remedy to kill the momentum from your opponent’s previous win is the first goal of the game.
The Marlies next game comes on Friday against the Rochester Americans. The puck drops at 7:05pm EST, and the game can be viewed on AHL TV.

Thank you to everyone with @PLKingsCCHL, @OHLHoundPower and @TorontoMarlies for their role in getting us to this point.

Leafs Nation, we are honoured and privileged to be a part of @MapleLeafs and I'm excited to get to work back home tomorrow. #LeafsForever pic.twitter.com/NfByF4z6Mj