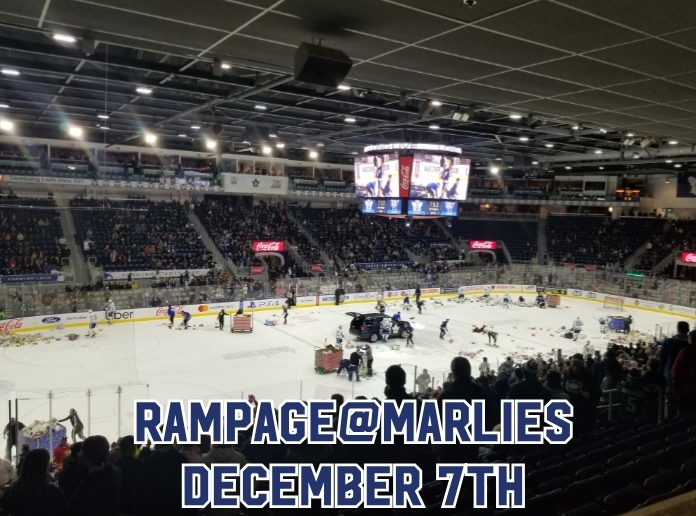 Marlies Hang Tight to Seal the Deal in the Third

TORONTO – Boy, does this look odd…is this a San Antonio team I see? The Rampage haven’t played in Toronto since January 3, 2015, with a thrilling overtime finish by then-San Antonio centerman Rocco Grimaldi.

Marlies Hang Tight to Seal the Deal in the Third

TORONTO – Boy, does this look odd…is this a San Antonio team I see? The Rampage haven’t played in Toronto since January 3, 2015, with a thrilling overtime finish by then-San Antonio centerman Rocco Grimaldi. It’s the first of four contests this season between the two, with the next game coming Sunday at 4:00 pm EST.

The first 7:38 went without a whistle to start, with both teams carrying a crash and bang style of play. Netminders Ville Husso and Kasmir Kaskisuo began the game strong for both squads.
Just a short time later, Derrick Pouliot made an initial point hammer shot, but gathering the rebound was hometown kid Jordan Kyrou to make the game 1-0 in the early going (FYI: Pouliot has the most points among defensemen in the American Hockey League).
With 7:53 left in the first, Rasmus Sandin started to streak towards the slot, and made a great move to fake the shot and open the goalie, only to spin a pass to Kenny Agostino, who buried the goal to get the bears flying from the stands on Teddy Bear Toss night. Jeremy Bracco got a helper on the goal to mark his 100th AHL assist. Additionally, Bracco scored the goal for the previous two Teddy Bear Toss nights.

That goal wouldn’t spell the end of the Rampage. Through traffic, Jake Dotchin fired a shot from the point, only to find Tanner Kaspick in the front to give the Rampage the lead.
At the end of the first, the scoreboard sat at 2-1. I can’t help but feel that the Marlies were simply outplayed that period. Though they had some late momentum, the first 15:00 didn’t seem like the Marlies had any advantage.
The opening 9:49 minutes of the middle frame didn’t see the Marlies register a shot on Husso. But on their first shot of the period, the puck flew past the Rampage to tie the game. With Agostino parked in the circles, Bracco ripped the pass cross-ice to give Kenny his second of the afternoon. Kenny’s one-timed laser would give him his 13th of the year.
The league’s fifth-place power play squad went to work in the middle stages of the game. The Marlies had a five-on-three opportunity for 0:25. Though it came unsuccessful, just 90 seconds later, San Antonio would go back to the box, creating a glorious chance for Toronto. Even with the extra men in the box, the Marlies failed to find twine. San Antonio pushed hard on the defense and shut down the power play.
The second period ended on a much higher note than the first. The Marlies outshot the Rampage 7-4 in the second and controlled the play. For Toronto, the third period needed to be a carbon copy of the second.
With traffic in the slot, Jesper Lindgren slid a pass to Teemu Kivihalme, who unloaded a bombshell past Husso to start the third. The goal should have given Toronto confidence to continue to press San Antonio. The Marlies would move into a defensive structure from there on out.
Though San Antonio seemed to push hard, the Marlies couldn’t capitalize on one of the strongest defensive plays of the season. Dotchin, who is in his 200th AHL game, shut down what could have been a solid chance for the Marlies to move ahead by two.

The Rampage fought back hard, outshooting Toronto 8-2 in the first twelve minutes. It felt like San Antonio were regularly buzzing in the third.
In the final moments of the game, The Rampage took to the special teams. Surprisingly, the goalie would stay in for 1:40 of the power play before being pulled. The Marlies killed the penalty and won the battle, but the final two minutes would tell if they won the war.
The timeout for San Antonio would prove unsuccessful, as Toronto held the lead to take the game, 3-2.

The Marlies pulled away with the victory in a game that very easily could have been a loss. Outshot 15-3 in the third period and unsuccessful on the power play all around, San Antonio gave Toronto a run for their money.
After the game, Marlies Interim Co-Head Coach A.J MacLean told the media his power play was rated “Alright” and that they could be better.

“If you don’t get any power plays early, it’s hard to get going.”

Both teams will play again Sunday at 4:00 pm EST. The game will be broadcast on AHL TV.

Follow Zack on Twitter for all things Marlies — live in-game coverage, news, and more! Also, be sure to “like” The Sin Bin on Facebook for all additional AHL, ECHL, and SPHL news and coverage!