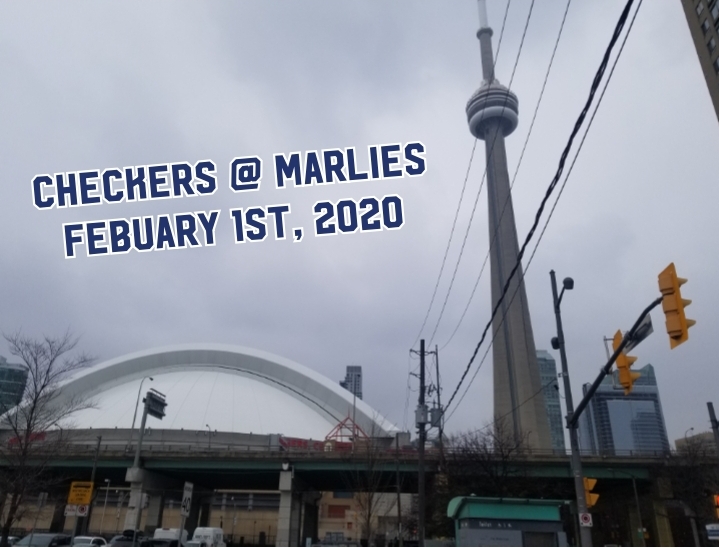 TORONTO – Outside the arena, the line spans a couple of hundred people; I would say that the entire lineup was over 1,000 people. It had a special buzz in the rink yesterday.

TORONTO – Outside the arena, the line spans a couple of hundred people; I would say that the entire lineup was over 1,000 people. There was a special buzz in the rink yesterday. Sure, many were lined up for a Zach Hyman bobblehead (which has a huge neck by the way), but inside you could feel the excitement in your bones, that feeling that gives you goosebumps almost. The smell of popcorn, hot dogs, and pizza surrounds the arena. As you walk by each stand, you see this special joy among the children, some smiling ear-to-ear with blue cotton candy, others sing and dance around the concourse.

The game would start slowly, but on the power play, Charlotte found twine. Oliwer Kaski scored his eighth of the season, but most notably, Morgan Geekie and Jake Bean also got points. Bean continues his AHL rookie dominance, moving to second amongst rookies in points. Also, Geekie bumps his point streak to 11 straight games. The goal was scored on Charlotte’s fourth shot of the game.
With 40 seconds left to go in the first, Newfoundland native Clark Bishop found string. Streaking towards the net, Bishop found himself towards Woll and ripped a backhander towards the rookie goalie.
Yesterday’s game looked much different than Friday’s. Both teams lacked any sort of pace throughout the game and failed to create any decent scoring chances. Charlotte found twine twice, but that’s not to say that the Checkers haven’t reached their full potential. Both teams had a chance to run up the scoresheet. If either can pick up the pace even a hair more, they have the opportunity to fill the net with pucks.
Woll did not start the second period, as Kasimir Kaskiuo subbed in for the final 40.

Coach Moore: “I didn’t really like how a couple of goals went in. (Kaskiuo) gave us a good game yesterday.”

Charlotte’s stunning power play continued to dominate in the second period, with Geekie lighting the lamp. The power play was set up like a Beethoven symphony orchestra: smooth, genuine and sweet. With help from Janne Kuokkanen, Jake Bean and Cavan Fitzgerald, it became an organized power play that was anything but unsuccessful, extending the Checkers lead.
Timothy Liljegren responded for the Marlies. The power play marker was triumphant from Jeremy Bracco and Adam Brooks. As mentioned in a previous piece, Bracco has been all over the score sheet in assists. This new assist on the special teams moves him up to 30 assists on the season.

Guess who? Number seven makes it 3-1
Clipped with @SporfieMoments pic.twitter.com/pgGcS5TQyK

Julien Gauthier showed off his speed and outskated everyone to score a goal, that, if you blinked, you probably missed it. Busting through everyone, I’m not sure that Kaskisuo saw it coming. The short-handed marker moved the Checkers up the ladder in shorthanded goals for (SHGF), making them one of the best in the league that category.
In the third, aftermarket slashes, grabs, and punches became the norm. Charlotte continued to outskate the Marlies, as their collective blood pressure began to rise. Nedeljkovic started to take exception to the Marlies lingering around the crease. Just minutes after he slashed away a Marlie stick, Nedeljkovic turned over the puck to Ben Harpur, who tipped the puck to Hudson Elynuik and found the net. Elynuik’s eighth point in 36 games moved the Marlies within two.

Marlies cut the lead, make it 4-2
Clipped with @SporfieMoments pic.twitter.com/jVDPcFRDBc

Tanner MacMaster skated hard along the sideboards to keep the play alive, then passed one back to Jordan Schmaltz, who ripped a hard and fast one-timer but missed. Off the glass, Garrett Wilson collected the rebound and finished the mission. Charlotte used their only 30-second timeout to re-group. It became apparent — Toronto was hungry for the win. And for a while, the Marlies dominated the ice.

Wilson, rebound, SCORE! 4-3 is the score.
Clipped with @SporfieMoments pic.twitter.com/kplBmdTB71

Now, there’s an investment from the crowd — everyone’s standing through the final 10. Fans watched closely as the Marlies burned through a power play chance and wait patiently with every shot. You can cut it with a knife; the fans were waiting for the comeback. Every time a Marlie picked up, the crowd roared more.
With a time out completed and an empty net, the Marlies couldn’t complete the comeback late in the third. Toronto controlled the play in the offensive zone, but couldn’t solve Nedeljkovic.
Tyler Gaudet said it best after the game:

Charlotte looked slow and out of gas, but there was simply no “umph” from Toronto in the first or second. Coach Moore can use today’s game as a teaching point, as he said he would before they left — you can’t play 20 minutes and win.

A greatness that transcends sports.