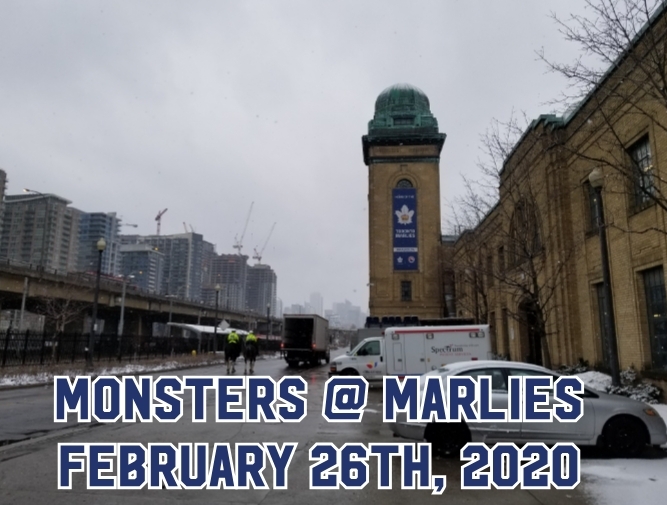 TORONTO – Wednesday’s school day game between the Toronto Marlies and Cleveland Monsters began with more drama than a high school group chat.
One of the biggest questions going into the game is whether or not it would even go ahead. The game, put on for school-aged kids, was sparsely attended thanks to a teacher’s strike in the Toronto area. 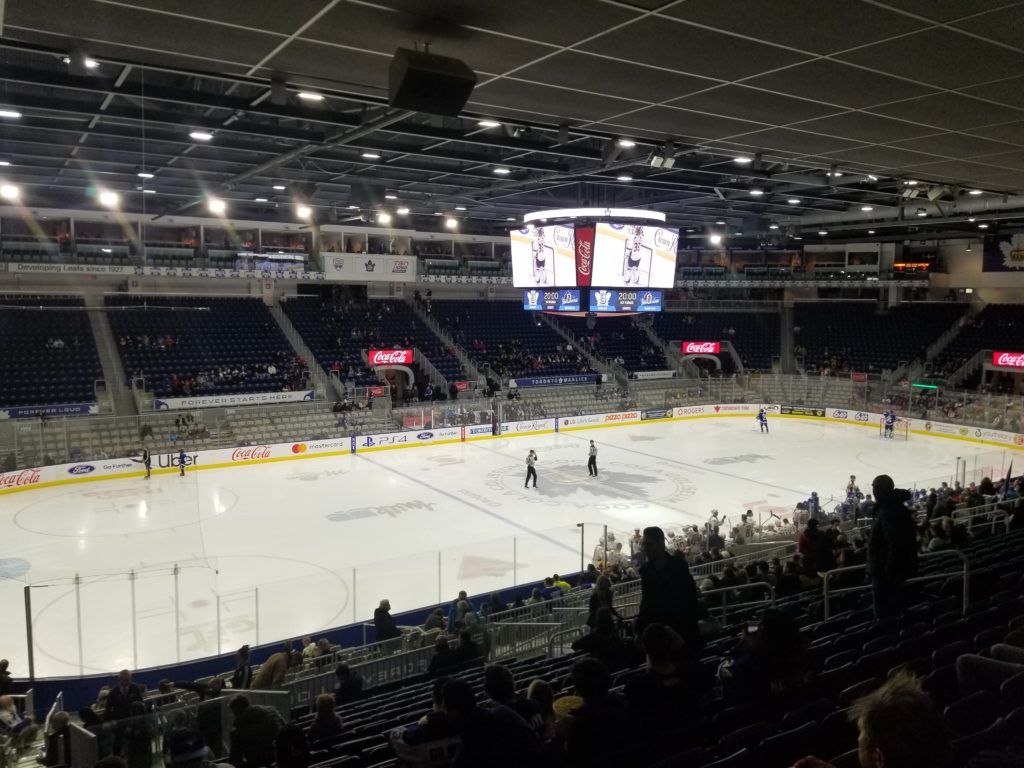 A shot of the Coca-Cola Coliseum moments before puck drop. MLSE opened the door to any of their employees to watch the game for free. Photo Credit: Zack Power / The Sin Bin

Also making headlines, Kasimir Kaskisuo was missing from the Marlies lineup, as Parker Gahagen was called up from the Newfoundland Growlers. It appears that Gahagen will be here to stay with the Marlies for an extended period of time.

UPDATE: Kasimir Kaskisuo has been listed as "day-to-day" by Coach Moore.

Calle Rosen was not available for the tilt, either, after being called up to the Maple Leafs. He will play on the club’s defensive parings, replacing Jake Muzzin, who suffered a broken hand.

“THEY’RE ALL READY FOR THE FACEOFF”

It didn’t take the Marlies long to open the scoring, with newly acquired forward Miikka Salomaki, finding the back of the net for his first as a Marlie.  Off a cross-crease pass from Kristians Rubins, Salomaki had all the time in the world with diving Cleveland goaltender Veini Vehvilainen unable to reach across.
Speaking of first as a Marlie, Michael Kapla scored his first goal of the season to double the lead. Tyler Gaudet picked up an assist on the quick wrister, as did Salomaki, who continued his early fire with his new club. Seven-and-a-half minutes into the contest, the Marlies had a 2-0 lead.
Monsters right winger Trey Fix-Wolansky cut the lead in half with his 10th of the season with about two minutes left in the period.
Three-and-a-half minutes into the middle period, the Marlies regained a two-goal lead when Teemu Kivihalme fired a shot from the point, which managed to tip off Gaudet’s stick and into the net for the veteran’s third lamplighter of the season.
Deeper into the period, Ryan MacInnis cut the Marlies lead in half with a strange deflection. With Fix-Wolansky taking the initial shot, it quickly bounced through many feet to be re-directed past Toronto netminder Joseph Woll.

On the back of a strong power play, the Monsters tied the game up with their second power play goal of the afternoon, when Adam Clendening (who is 6th in points among AHL defensemen) scored seventh goals of the season with a quick drive from the point to even the game at 3-3.
In the final period, I couldn’t do anything but applaud the defense of both clubs. Both teams came up strong reading each other passes and getting in the lane blocking shots. Jared VanWormer sacrificed his body to prevent a hard shot. The bullet did sting the Michigan Native, but he stayed in the game. The Marlies would have three chances on the man-advantage during the period, but could not capitalize.
One shot, one goal. That’s the story as the game went into overtime, and it didn’t take long for the ‘golden goal’ to happen. Tanner MacMaster‘s deflection of a Kenny Agostino floater fooled an irate Vehvilainen to give the Marlies their 27th win of the season, just 23 seconds into the extra session.

For Toronto, there are a few positive things to take away from a game like this. After allowing the game-tying goal near the end of the second, the Marlies bowed up on defense to hold the Monsters to just two shots in the third period.

“They found their way again. The first period I thought was pretty good, too; the second period got away from us. Special teams were not up to par.”

The Marlies will play again on Friday in Utica, New York at 7:00 pm EST. The game will be live on AHL TV.