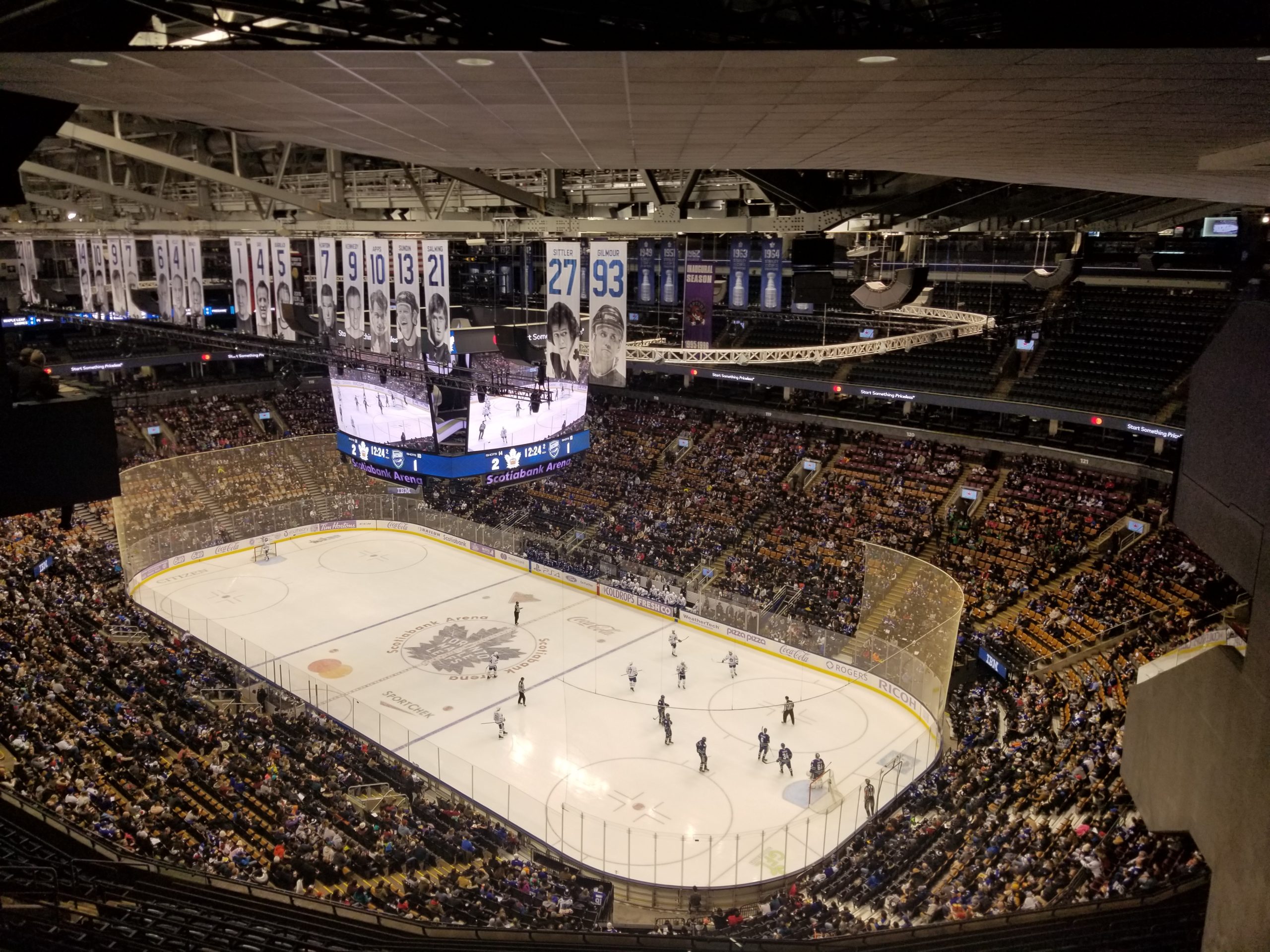 TORONTO- Co-Head Coach A.J MacLean said it best after Saturday’s game: cancer affects everyone. The Marlies honored that yesterday at Scotiabank Arena in downtown Toronto when they took on the Utica Comets.

TORONTO- Co-Head Coach A.J MacLean said it best after Saturday’s game: cancer affects everyone. The Marlies honored that yesterday at Scotiabank Arena in downtown Toronto when they took on the Utica Comets.

Last year, the Marlies went 2-4 at Scotiabank Arena. As Rasmus Sandin put it, it’s never easy to walk into a new arena.

‘We haven’t practiced here before. The ice is a little bit different; obviously the rink is bigger.”

The first few minutes started as a feeling-out process while teams adjusted to the new ice. Joseph Woll and Michael DiPietro respectively steered aside everything to start. FYI: Toronto wins 78% of the time when they score first, while Utica sits at 73%.
Passed the midway point of the period, the Marlies broke the ice with a goal from Tanner MacMaster. Pontus Aberg took a shot from the Zamboni entrance, where Mitch Eliot couldn’t get a stick on it. Parked out front was MacMaster to slide the puck past DiPietro.
Just five minutes later, Utica began the power play deep in their zone with an intense rush. The Comets made a drop pass to find Reid Boucher, who slid the puck to Kole Lind. Lind then earned an assist on the resulting goal due to his active pass to Sven Baertschi.
The Marlies would return the favor on the power play to get the go-ahead goal. With Sandin walking the line, Jeremy Bracco unloaded the initial shot. Again, the Marlies found themselves parked out front, with Kenny Agostino finishing for the tally.
The first period was a back-and-forth affair on all accounts. With the late goal from Agistiono and Toronto leading in shots, the Marlies were poised to have momentum leading into the second.
The Comets began the second on the power play, starting with a buzz. From the point, Baertschi made a backdoor shot that found Justin Bailey on the doorstep to tap in his fifth of the year.
Darren Archibald took a high stick that drew four minutes later in the period. The power play units kept their standard structure, but couldn’t find twine. Egor Korshkov made good strides to get pucks towards the net, but they came up empty at a critical time.
With 40 minutes down, it’s hard not to look back at the period that could have been. With almost six straight minutes of power play time, I couldn’t think of a better time for Toronto to take control of the game. The Marlies failed to hit the net at best and couldn’t move pucks to twine.
The third period looked like an odd, unstructured mess to start. Both goalies stayed keen, though, with big saves on costly chances.

“No matter who’s in the net, they’ve been sharp. They always give us a chance to win games.”

Utica would score first in the third. Kristians Rubins turned the puck over in his zone, which set up flawlessly for the Comets. Carter Camper hits Lind on the side that rings it off the post and in.
The Marlies power play went back into action again a short time later. The fans knew this was their time; they were pumped. Aberg, who likes to hang around the circles, failed to get any chances despite time and space. Agostino and Rubins both had opportunities to tie the game, but couldn’t stuff it passed DiPietro. That would change with 11:13 left in the third on a goal by Archibald. Timothy Liljegren drove the initial blast, and the Marlies capitalized near the net.
The fans kept roaring later in the third. With 8,176 all doing the wave, it would almost be strange for me to tell you that this generated no momentum from the Marlies.
Even so, for close to six minutes, it seemed like it was all Utica. With over four minutes left, Hudson Fasching ripped a shot from the circle that sniped over Woll’s shoulder. Though goals over the shoulder are always hard for goalies, this one looked like it hit harder on Woll.
Sandin turned the puck over moments later to cause a breakaway, but Woll kept calm to make the save.
Though Toronto had an empty net, and an energetic buzz but, key names could not score to tie the game. The Marlies suffered their first loss at home this season and snapped a seven-game winning streak, falling to Utica 4-3.
Today’s game showcased hockey that I’ve never seen before from both teams. The defense seemed nowhere to be found, and the offense capitalized on that. With both clubs facing off again on Sunday, this could be an excellent chance to make the minor adjustments ahead of the game

“It changes the hockey perspective a bit. There’s a lot of people fighting cancer, [so we are] just trying to show as much support that we can.”

“I think everybody in their life has people affected by cancer, and I’m no different. It’s great that we can all come together on a night like this and do something special.”

“It’s a big thing. Hockey is a big family. I think it’s great that hockey comes together and fights for something that’s really important.”

Going to @MileOne_Centre next weekend and her favourite player @SPooley94 is still away! Wishing all the NL Growlers that are with the Marlies the best of luck. Photo credit Jeff Parsons! @Buddy_ThePuffin @DeanMacDonaldNL @NLGrowlers #snowdayfun pic.twitter.com/f9dMac07Qs