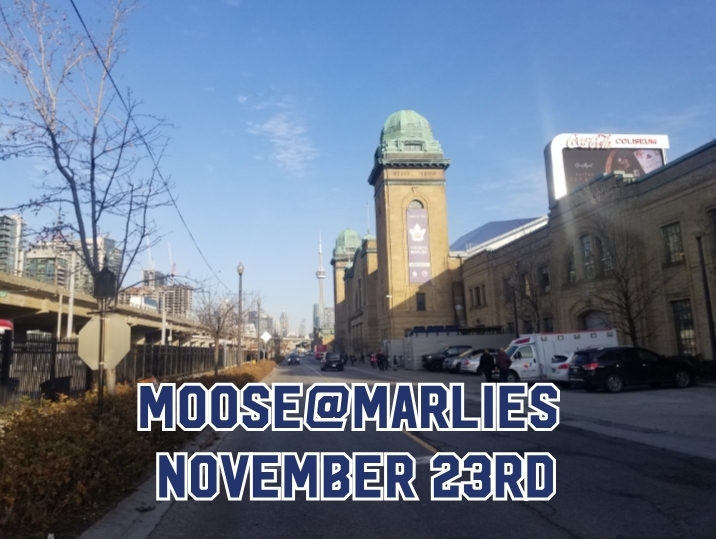 TORONTO – It may be game number 286 of the AHL season, but boy does it feel like it’s the most important game of the season.

TORONTO – It may be game number 286 of the AHL season, but boy does it feel like it’s the most important game of the season. The Marlies are desperate to prove themselves under the new coaching tandem of Rob Davidson and A.J. MacLean. They are yet to lose a game at home, cashing in on all seven games.
ARVE Error: No oembed src detected

On the same spectrum, the Manitoba Moose have won their last seven games. Mikhail Berdin has started the previous 10 games for the Moose, posting a 9-1-0 record. Berdin hasn’t let up more than two goals in his past seven starts.
Since the Manitoba Moose re-entered the American Hockey League in 2015-16, Toronto has posted a 21-4-1 record against them. Additionally, in their most recent meeting, Joseph Woll posted a shutout in his AHL debut, blocking all 22 shots.

Things became obvious to start the game; it was going to be a back-and-forth affair. The Moose maintained a crash and bang style in the first half, with Michael Hutchinson standing his ground.
The Marlies had two power play opportunities within the first 10 minutes. On the first, Pontus Aberg gave the only shot. In the second, their top power play unit played the first 1:41 of the advantage, and for the second straight time, Aberg found himself a good lane, but couldn’t find twine.
Garrett Wilson took a hooking call to finish the period. Wilson leads his team in penalty minutes for his team, but Toronto came up strong on the kill. The penalty kill notched Manitoba ahead of Toronto on the shot sheet, 9-7.
The second period would be a different story. The Marlies got on the board first, with a goal by Adam Brooks. Ben Harpur made the initial shot through a few Moose, but sitting on the other side of the crease was Brooks. He was able to tap in the rebound off Berdin’s pillows. PS: The Marlies are 8-2-1 when scoring first.

Brooks gets on the board first!
Clipped with @SporfieMoments pic.twitter.com/NEn2uZaNXF

In the first 15 minutes of the second period, Hutchinson stopped everything else that came his way. The Moose registered close to 20 shots, but on every breakaway or defensive turnover, Hutchinson made the save (or at the very least, got a piece of it).
On the delayed penalty, Teemu Kivihalme blasted a shot from the point that went low glove side, only for Tyler Gaudet to spin a pass to Matt Read on the other side to punch in for his third of the year. With that goal, no team has scored more goals in the second period than the Marlies.
Though the first period seemed like the Moose had more controlled the game, the second looked different. The Marlies looked like they were hungry for their eighth straight victory at home. With Hutchinson playing strong, the Marlies had confidence leading by two after 40.
The Marlies began the third period the same way they did in the second. Timothy Liljegren, in his first game back from injury, blasted a shot from the slot that found it’s way past Berdin glove side. Tanner MacMaster and Egor Korshkov both got helpers on the goal. The assist marks points in five consecutive games for MacMaster. This goal marked the first time the Moose gave up more than two goals since November 6.

“Confidence has a lot to do with my play, so I’m just trying to roll with it.”

Meanwhile, just moments later, the puck found itself loose in the crease and managed to pass the red line for just a split second. Wilson got credit for the goal and received his seventh point of the season. After the goal, Moose Head Coach Pascal Vincent called a timeout to get things back on track.

Ref says it's in! 4-0 for Toronto
Clipped with @SporfieMoments pic.twitter.com/jstpu2BRbL

With just over 11 minutes left to go in the game, Cole Maier took a shot from the sideboards, which found Hutchinson low. On the rebound, Kristian Vesalainen finished the mission on a wide-open net to break the ice for Manitoba.
Just a short while later, C.J. Suess made a glorious pass from down low up to the slot to spring Skyler McKenzie for Manitoba’s second of the game. The goal gave the Moose more confidence and made the period look strong for both teams.
With under 120 seconds left, the fans know what’s next – the win is imminent. The fans echoed, “Let’s go, Marlies!” as the clock counted down, all the while with an empty net.
The Marlies secured the two-goal lead, finished the game strong, and kept their home winning streak alive. Manitoba’s loss was the first since November 6.

Today’s game was a big one for the Marlies. The win today marks the best start at home in franchise history. The second period was especially intense. Although both teams gave up a few odd-man rushes, it’s something that can be tweaked ahead of tomorrow’s game.
The last time the Marlies started this good at home? They won the Calder Cup in June.
Manitoba will need to go back to the basics for the next game. Focusing on the game at hand, while remembering the success they had in the previous games, will be essential.
Both teams meet again Sunday at 4:00 pm ET, where the Marlies will look to go 4-0 this season against the Moose. The game will be broadcast on AHL TV.

As our #HockeyFightsCancer game approaches, Marlies players share who they’re fighting for.

Who do you fight for? Comment below ⤵️? pic.twitter.com/cVoTCM2BRt

Be sure to follow Zack on Twitter for live, in-game coverage and in-depth analysis on the Toronto Marlies!