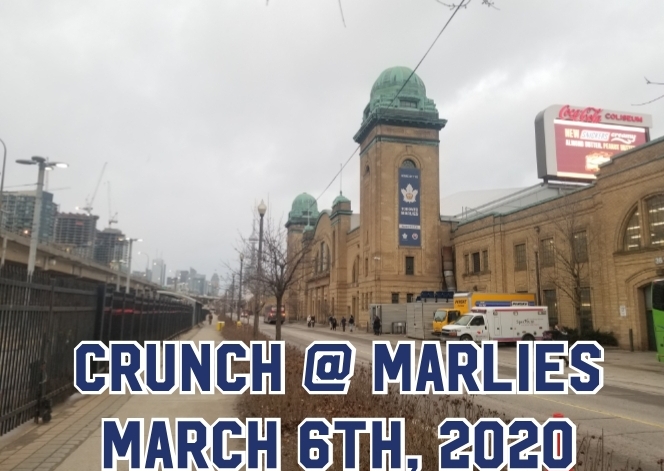 TORONTO – There was this strange buzz around the concourse, a genuine fear. It’s the first time since 2010-11 that Toronto hasn’t looked like a hopeful for April.

TORONTO – There was this strange buzz around the concourse, a genuine fear. It’s the first time since 2010-11 that Toronto hasn’t looked like a hopeful for April. Sitting four points outside the fourth place Syracuse Crunch, the Marlies playoff push depends on how they play in their two-game series against Syracuse and the games ahead.
For the Marlies, it was a tough decision for between the pipes. In Wednesday’s contest against Belleville, Joseph Woll had problems finding rubber, resulting in a poor showing, only stopping 21 of 28 shots on net. With Toronto putting faith in Parker Gahagen, Syracuse turned to an AHL vet Scott Wedgewood.

The roaring Marlies power play got its first looks near the middle of the first frame. The special teams gave Toronto a lick of confidence. Kenny Agostino received a long stringing pass from Joseph Duszak to seal a quick shot from inside the circles to open things up.

Just 12 seconds later, the Marlies scored their insurance goal by Tyler Gaudet. To his credit, Miikka Salomaki started the play with a good pass from behind the goal line, cross-crease to a lonely Gaudet. Salomaki’s marker registers his fourth point in five games with his new club.
Later in the second, the young superstar Alex Barre-Boulet scored a goal that literally made the game go back in time. Scoring past the 12:00 mark, the game resumed for close to four minutes before stopping to review. Barre-Boulet sits fifth in the AHL in points through his second year in the American League.
After a quick review, the goal counted, and everything returned to its normal state.

Rule 79.1 also states that the time must go back to when the goal was scored, BUT, the rule book does not make mention to the shots on goal. This rule is not the same as the ones in the NHL

Hudson Elynuik gave the Marlies their insurance goal lead back in the late stages of the second period. Michael Kapla made the initial shot from inside the blueline. With a battling Elynuik in the slot, his tip gave his team a light towards the intermission.
Agostino’s dominance on the power play continued to march in the third, with his 27th goal and 49th point of the year. It was mentioned in the pregame preview that whoever could dominate on the power play would dominate the game. With the Marlies running two goals with special teams, it became clear that Syracuse was agitated.
The third period would be a robust back-and-forth, but the Crunch had a slight advantage. With well over six minutes left in the third, the Crunch pulled their goalie for an extra attacker on the power play, making it 6-on-4. Taylor Raddysh allowed Syracuse to get back into the game, keeping it a two-goal game.
Elyinuk scored an empty-netter to send the fans to the street cars, as the Marlies won the game, 5-2.

With the dust settled, it’s fair to look back at the play of the Marlies through the game. There was a necessary transition from the first to other periods, one that cleaned up their game. Able to keep the puck moving and deliver solid crisp passes, the Marlies showed a well-rounded effort.
As for the Crunch? Friday’s game was a critical one for the team, and they failed to deliver two points. What stood out to me was the lack of effort in the first. For a team that is the strongest in the league out of the gate, they couldn’t match a Marlies team that wasn’t skating to par.
With the way the North Division stands right now, games like these could be do or die.
Both squads rematch Saturday at 7:00 pm EST. The game will be live on AHL TV.

It's OFFICIAL the DEFENDING CHAMPS are playoff-bound.