TORONTO – An early power play, a waved off goal, a quick goal, and a way to get under your opponent’s skin are all ways to gain momentum in a hockey game. 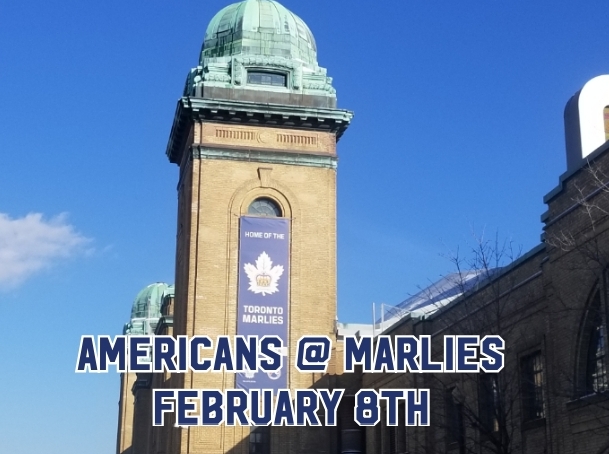 TORONTO – An early power play, a waved off goal, a quick goal, and a way to get under your opponent’s skin are all ways to gain momentum in a hockey game. For Toronto, they needed to snap out of the losing skid they’d been in and return to October, November and early December hockey. In Saturday’s contest against Rochester, they had to do it without critical fixtures (due to three games in as many days), which is a challenging experience for some teams.

Marlies Head Coach Greg Moore: “You could tell the energy in the locker room – the guys were excited to play tonight. You can feel the momentum they’re starting to gain.”

The Marlies struck first, just 52 seconds into the game. Nic Petan made a centering pass from behind the net to find Mason Marchment in the slot for a one-time pass to beat Andrew Hammond early. The Marlies had Hammond’s number in their previous contest and tested him well throughout the beginning.
The Marlies continued their strong game throughout the period. Though Rochester dominated the shots 17-11, the Marlies held the Americans to the task. Toronto had good zone entries throughout and had quality shots on Hammond. As for Joseph Woll? He looked like the goalie we saw at the beginning of the season.
It only took three seconds into the second period for Dalton Smith to attempt to drop the gloves with Marchment. Marchment didn’t take the bait, landing his team a swift four-minute power play. The power play did have good looks, but had nothing to show for it. Coach Moore said in after Tuesday’s game that he was disappointed with the special teams; I can only imagine he felt the same way again.
Rasmus Asplund and Tyler Gaudet highlighted the middle portions of the second period with breakaway opportunities that were denied quickly on either end. Speaking of being alone, Kenny Agostino also failed to convert on a penalty shot. Finally, Lawrence Pilut was robbed of what looked to be a questionable goal. Dancing across the line, Woll swiped the puck back behind the goal line before anything could cross.
In an odd turn of events, the officials were quick to resume the play.
Marchment found his way back onto the scoresheet with a deflection goal near the tip of the crease at the end of the period. Joseph Duszak made the initial pass to a wide-open Agostino, who delivered a laser of a one-timer that found a deflection from Marchment for his second of his game.
In the third, Rochester had a fair grasp of the game. They controlled heavily in the offensive zone but failed to solve Woll. Through the first nine minutes of the third, Woll faced 10 shots, which brought his game total to 33. Rochester had a well-orchestrated power play, but came up short despite Woll being a bit off his game for a brief time, even losing his stick for a brief moment.
In a great show of sportsmanship, Garrett Wilson handed the puck off to Matt Read to put the final nail in the coffin and push the Marlies past the Americans, 3-0. The same can be said when many tried to spring Marchment for his third goal of the night. Though the Marlies couldn’t find Mason, they did find a final empty-netter to put the game at a 4-0 final.

Marchment: “He (Agostino) could have just have had an easy goal there. It’s really nice to see the team comraderie there”

Woll was a big story line in Saturday’s game. He stopped 38 shots and made vital saves when necessary. You could tell he was confident through the game.

Coach Moore: “He came up big tonight. You can tell by his body language: he’s calm, he’s assertive, and he was tracking the puck really well today.”

Toronto will play Sunday at 4:00 pm EST against Laval. The game will be broadcast live on AHL.TV.

Both clubs have continued to poke at eachother as they walk down the halls. Mason Marchment began yelling at a Rochester player as he walked off. Lots of tension between the two teams.

Follow Zack on Twitter for live, in-game coverage and all sorts of various news and tidbits regarding the Toronto Marlies! Don’t forget to also follow The Sin Bin on Twitter and Facebook for all additional AHL, ECHL, and SPHL minor league hockey news & insights!