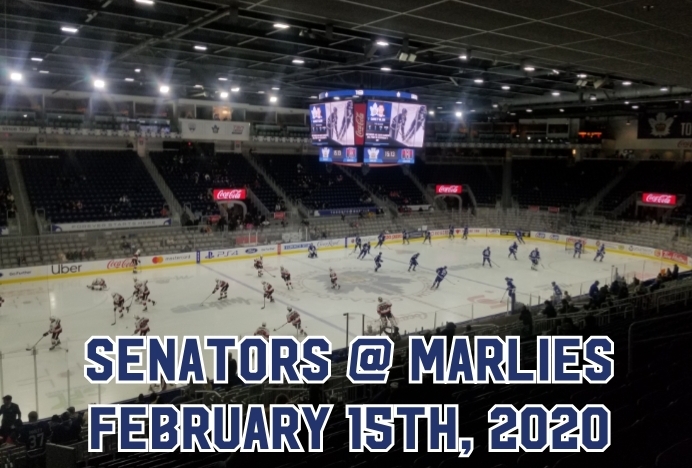 Marlies Wake in the Second to Punish Senators

TORONTO – It’s a game of playing uphill and looking towards the light at the end of the tunnel. No game is finished at the end of 20 or 40 minutes. For Saturday’s game, it proved things weren’t done after 60.

Marlies Wake in the Second to Punish Senators

TORONTO – It’s a game of playing uphill and looking towards the light at the end of the tunnel. No game is finished at the end of 20 or 40 minutes. For Saturday’s game, it proved things weren’t done after 60.
ARVE Error: No oembed src detected

Belleville would dominate to start and had excellent opportunities through the first half of the opening period. On a long stretch pass, Jordan Szwarz scored off a rebound fro the post. The initial shot by Alex Formenton rang the iron and set up perfectly for Belleville’s Szwarz on the doorstep to bank one in. Formenton’s tally keeps him near the top of the AHL in rookie points.

Belleville would add three more goals from Josh Norris, Jonathan Aspirot and Vitaly Abramov. The goals came from sloppy turnovers, poor defence, and a careless attitude. A Toronto timeout had to be used to clear the air as the Senators began to run away with the game.
Scott Pooley did find light for the Marlies in the final five. With a drop pass from Joseph Duszak, it was the first sign of life from Toronto despite being outshot 13-2. Finding the net against Filip Gustavsson did spark one or two shots after, but I can’t help but think Toronto’s carelessness could have been costly for them on Saturday
The outlook of the second period changed for the Marlies. They doubled their previous shot total in the opening seven minutes but failed to defensively cover Joseph LaBate, who cleaned up on the rebound.
The goal brought a physicality from the Marlies, pushing the heat to a boiling point.

Mason Marchment rode off the physicality boost and the power play, scoring near the middle of the second. Marchment has seven goals in his previous four games, many of them coming against Belleville. It’s hard not to imagine that Mason has their number.
With Mac Hollowell scoring late in the second period, it showed a bit of hope for the Marlies. Tying the Senators in shots in the middle frame looked convincing for the Marlies; Toronto had to look to the third period to try to come back, a period in which Toronto usually turns on the jets.
As for those jets? They were on blast to start. Hollowell picked up where he left off and put his name on the scoresheet with a pass from Hudson Elynuik. With his fast wrister, there became an investment from the hometown fans. Going from 4-0 to one goal down, you could feel it.
Szwarz wasn’t long picking up his second of the night, either. His goal was one made of many defensive mistakes from the Marlies, which adds to the long list from Saturday’s game. Every defensive error in the third period feels that much worse, especially in a close game.
Deep in the third, the Marlies found a way to make it 6-5 with Matt Read clocking in. Having a six-man operation in the final three minutes helped, but it would be up to a four-on-four (five-on-four with an empty net) to prove if all was for not.
The five-on-four would work. Adam Brooks blasted a one-timer from circles to blow the roof off the Coca-Cola Coliseum. I have yet to hear the crowd roar as much as they did while controlling in the offensive zone. With the goal scored at 19:44, it made for an exciting finish.
But things took a turn for the worst only 16 seconds in, as Brooks took a nasty fall and the crowd went from blasting to silence for close to a minute. Although it was a severe loss for the team, Duszak, Tanner MacMaster and Egor Korshkov went to the ice with a firing burning inside.
Streaking towards the middle, Duszak made the seeing-eye pass to capture Korshkov busting through the middle. With time and patience, Korshkov made a move to fake out Gustavsson to get the game-winning goal.

When Garrett Wilson was asked about the change, his answer was the best description of how the Marlies played:

“We just played with a little more urgency. We knew we had to take a couple of more risks to get some offence going, and it paid off for us.”

Wilson also jokingly spoke about the play of Korshov recently:

“I think he only scores highlight reels. It would be nice to see him get a garbage goal once in a while, make us all feel better.”

Continuing the comedy club trend after the game, Marlies Head Coach Greg Moore came to the media with all smiles. When asked what changed for the Marlies

“The score very quickly, I guess.”

It’s great to joke and laugh after a game, and I don’t want to sound like a stick in the mud, but the first period was no laughing matter. For Toronto, their sense of urgency saved them on Saturday, and if the late goal was scored just 17 seconds later, there would be no laughter after the game.
The Marlies next game comes on Family Day (Monday) at 3:00 pm EST at the Scotiabank Arena.

Best kiss cam moment ever? So much love in the air ❤?
Clipped with @SporfieMoments pic.twitter.com/1FxAW4ntpN