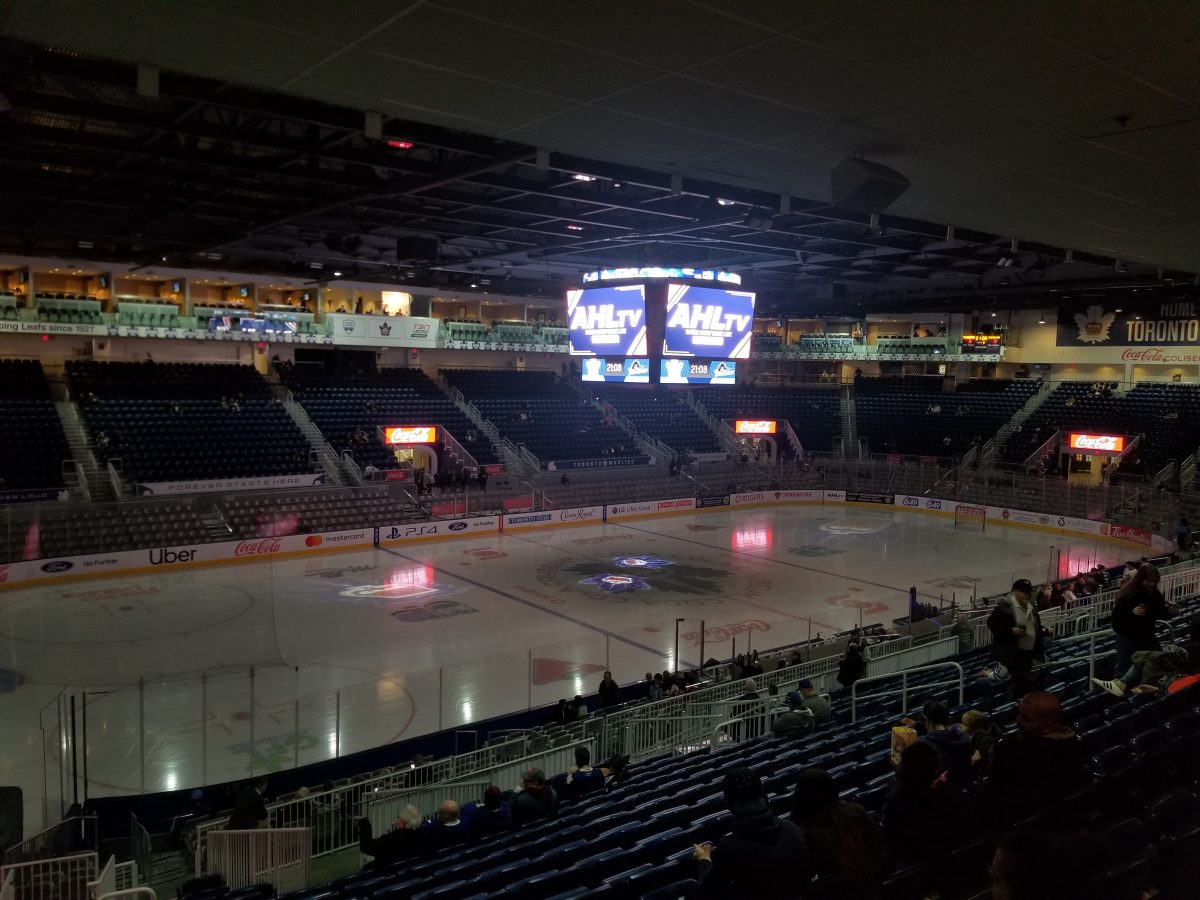 TORONTO – Yesterday’s game saw the Toronto Marlies improve to 5-0 after defeating the Cleveland Monsters 2-0.
The Marlies have had one of the best starts to the season in franchise history. Entering play on Sunday, the Marlies were atop the standings in points, have the fewest goals against per game at 1.50, and have the best power-play and penalty kill. Additionally, Egor Korshkov has points in every game and Kasmir Kaskisuo is the league-leader in wins.
The Cleveland Monsters came into the final game of the weekend set looking to disrupt all of that.
Backup netminders Joseph Woll and Matiss Kivlenieks would get the nod in goal. Woll registered a shut-out in his last game against Manitoba, while Kivlenieks has a .917 save percentage through three games.
Cleveland broke the ice first with a pass straight across the crease where Eric Robinson was able to feed Zach Dalpe was able to bang in his third of the season to make it 1-0
Soon after, the much anticipated Marlies power-play took in effect, where Korshkov was able to get some good looks in the slot, but couldn’t bury one.
Speaking of power-plays, Cleveland had their first chance on the man-advantage just 11:13 into the game, when Hudson Elyniuk sat for tripping. Ramus Sandin was a fraction for a second too late in sweeping away a shot by Justin Scott, giving the Monsters a 2-0 lead. Additionally, This was the first goal on the penalty kill that the Marlies have given up all season.
Cleveland gave up a poor cross-checking call late in the first period. Once again, this set up the league’s best power-play in motion. Sandin had a masterful feed from Pontus Aberg to rip one past Kivlenieks.
Not long later, on a faceoff deep in the Monsters zone, Aberg ripped a shot from the circle to tie the game at two with just 50 seconds left in the first frame.
Though the shots were 11-9 for Toronto, the Monsters showed wear and tear late in the first period. The intermission came well-timed for Cleveland and gave them a chance to re-group and start again.
It would only take 2:08 for the penalty box door to swing open in the second period. Robinson would sit for that elbowing call. Sam Vigneault would race down the side of the boards and beat Woll and make it 3-2 Monsters.
The Marlies would answer again 85 seconds later, when Tanner MacMaster sniped one over Kivlenieks in even strength to tie the game at three.
Once again, the Marlies would sit in the box for two minutes on a Jesper Lindgren holding call. It would only take 11 seconds for Kole Sherwood to answer back to make it 4-3. That marker would be the Monsters’ fourth goal on 11 shots.

The tit-for-tat continued, when Kenny Agostino fired a crazy shot from the corner that ping-ponged off a couple of Monsters in the slot and into the net to tie the game at 4-4.

With 8:15 left in the third, the arms of the referee raised again, and to the box the Marlies went. Justin Scott fired a shot that beat Woll and gave the Monsters a 5-4 lead. The goal would be Scott’s second of the game and season.
The Marlies put the game on level terms once more with a slot shot at 6:12. Garrett Wilson would get the slot feed from Sandin to tie the game at five, making for a dramatic finish.
In a wild, penalty-filled contest, its only fitting that the special teams had a chance to end the. With 2:11 left in overtime, the Marlies were whistled for interference. It gave the Monsters the most crucial opportunity of the game and provided Marlies head coach Sheldon Keefe a chance to give his team some reminders:

“A Lot of the way you kill a five on three is similar to a four on three for us at least, so I’ve been reminding them of that structure,” Marlies head coach Sheldon Keefe said after the game.

Four against three for 2:00 wasn’t enough for the Monsters to capitalize, and the Marlies did an excellent job of killing the penalty. Five minutes of overtime wasn’t enough for the game to be decided, and a shootout would be necessary.
The opening round saw Aberg and Nathan Gerbe, and both would fail in the first round. The second round would be different, where Cleveland would get the go-ahead-goal. Markus Hannikainen was able to open up Woll and put it through. In the third round, Nicholas Baptiste would answer the call to tie it for Toronto. It would take all the way to round six before someone scored again, that being Korshkov, who scored the game-winning goal in the shootout as the Marlies took the game 6-5. This improves their record to 6-0.

Woll looked shaky all-throughout, but on the upside, he did have a slight improvement in the third period.

“Today wasn’t my day. But when you have a team like that to bail you out, it’s pretty cool; it gives me a lot of confidence,” Marlies netminder Joseph Woll said.

Korshkov has scored points in all six games thus far and leads the team with seven points (5G, 2A).

Both teams return to action on Saturday, as the Marlies face the Senators and the Monsters match with the Ice Hogs. Both games can be seen on AHL TV.