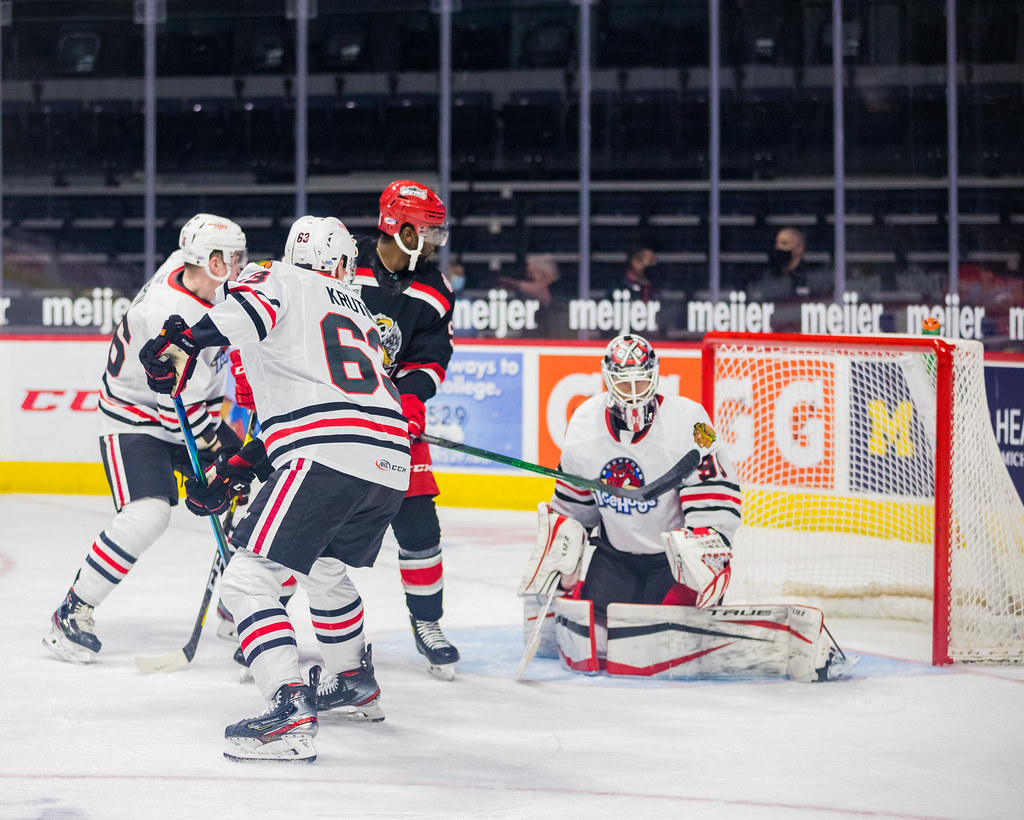 ROCKFORD, Ill. – The Rockford IceHogs currently have four goalies on the roster. Matt Tomkins was tabbed the primary starter before the start of the 2020-21 season. Fresh off of a stint on the Blackhawks taxi squad, Tomkins has shown why he earned that role.

Tomkins has a tough job as the last line of defense for a Rockford squad that is short on experience and lacks the talent depth of other teams in the AHL. That said, the 26-year-old goalie put together solid performances in his last two starts against the Grand Rapids Griffins.

The highlight was a 42-save outing in Rockford’s 2-1 overtime victory Saturday night. The IceHogs were dominated everywhere but on the scoreboard at Van Andel Arena by a Griffins club that had stifled the piglets in three previous meetings.

Tomkins made point-blank stops on several crucial power-play opportunities for Grand Rapids and kept the Hogs in contention all evening. All this in just his second game back since being called up to the taxi squad on February 26.

Before starting Thursday’s game with the Griffins, Tomkins had last seen game action on February 22. In that game, he was blitzed for six goals by Cleveland, giving way to backup Cale Morris.

Tomkins was recalled in order to provide a conditioning assignment for Collin Delia. He did his best to use the time in Chicago to kick his game up a notch.

“It was a good change of pace, a good experience,  Tomkins said while in a media availability March 9, the day after he was returned to the IceHogs. “It was good to be around those guys, good to be around the group, coaches. Get different feedback, different eyes. It was a positive experience. I tried to take as much out of it as I could, and it went really well.”

Delia was down with Rockford to get some game action and to build some confidence. Tomkins, in turn, got a chance to work with Jimmy Waite, Chicago’s goaltending coach. The added mentoring fit in quite well with developmental goalie coach Peter Aubry, according to Tomkins.

“There was nothing really glaring, in my opinion, coming in there that I wanted to work on,” Tomkins explained. “It’s good to just kind of see the things that he (Waite) thinks are important. I think there’s a lot of overlap with what Pete teaches here as well. It’s good to see his (Waite’s) perspective on specific scenarios, how he likes his guys to play them.”

When the 16-day gap between game action was pointed out to Tomkins, he was unfazed.

“I’ve gone through this experience a lot before, especially last year,” he pointed out. I had long stretches between games. Nothing I haven’t seen before.”

Tomkins was the third goalie behind Delia and Kevin Lankinen last season. With the former playing below expectations and the latter battling injury, Tomkins played well in nine starts throughout the first four months. He earned his first NHL contract on January 23, 2020,  a two-year deal that is up following this season.

After signing, Tomkins was used sparingly. The organization chose to give most of the workload to Delia after Lankinen underwent shoulder surgery. From his signing until the season was halted, Tomkins got just four starts. He was in net for Rockford’s final game last spring, a 3-2 overtime loss to Chicago March 8.

The Blackhawks drafted Tomkins in the seventh round of the 2012 NHL Draft. After a final year in the Alberta Junior Hockey League, he spent four seasons at Ohio State. After a 12-5-3 record with the Buckeyes in his senior season to go along with a 2.48 GAA and a .909 save percentage, he signed an AHL contract with Rockford.

Tomkins appeared in eight games with the IceHogs in his rookie season of 2017-18, but spent most of those first two years with the Indy Fuel of the ECHL. In 2018-19, he made 54 appearances for the Fuel, nabbing an ECHL Player of the Week Award on three different occasions.

Tomkins spent all of last season with the IceHogs, save for the time he spent on Team Canada’s winning Spengler Cup squad. He picked up a win for Team Canada against HC Davos, making 22 saves in a 5-1 victory.

For the first time in his four-year professional career, Tomkins is getting starters minutes for the IceHogs. As the only NHL contract in Rockford at the moment, it makes sense to give him the opportunity to show off his game. He has certainly earned it.

Morris had solid night in his first AHL start back on February 23. The Hogs also have Tom Aubrun on the roster. While Tomkins was with Chicago, Rockford signed KHL goaltender Ivan Nalimov to an AHL contract for this season. How does having three goalies behind him looking for playing time affect his mindset?

“I’ve certainly learned something over my career that giving that stuff attention and thinking about these things doesn’t serve you any good,” Tomkins said. “I just try to focus on myself. It certainly is something that’s very much out of my control.”

Rockford returns to action tonight at 6 pm, when they play Grand Rapids in the final game of a three-game set.