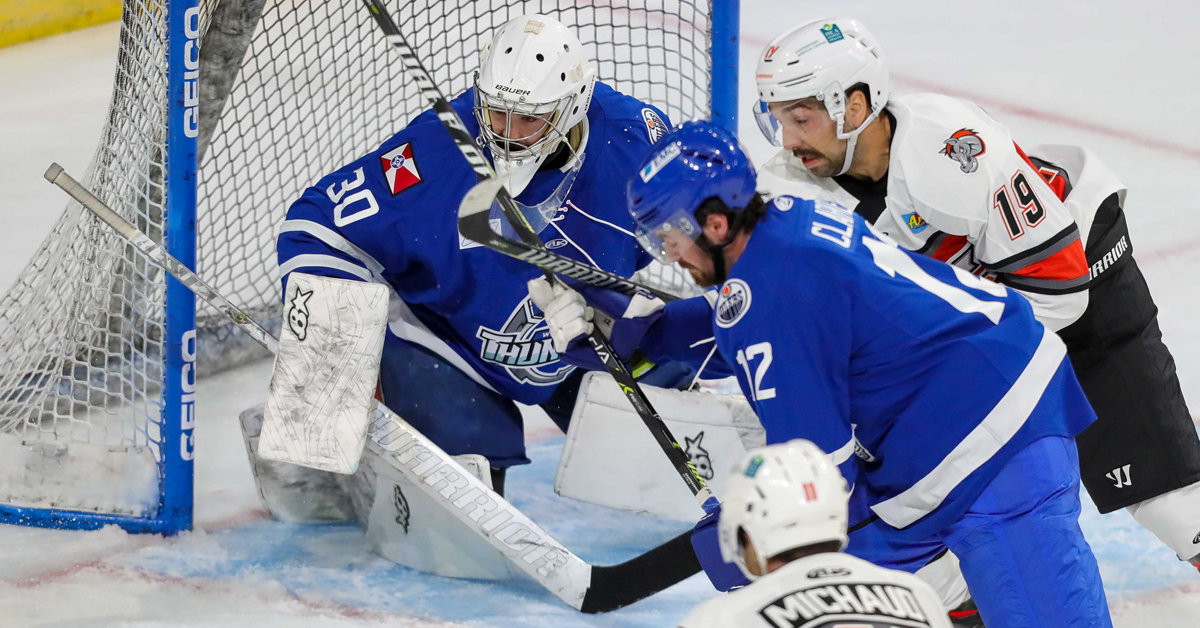 Ultimately, special teams did in the Mavericks, as they were unable to convert on seven powerplay chances, including two extended 5-on-3 opportunities

WICHITA, Kan. – In the first matchup between the two teams, the Kansas City Mavericks fell 3-1 to the Wichita Thunder Sunday evening in Wichita. Ultimately special teams did in the Mavericks, as they were unable to convert on seven powerplay chances, including two extended 5-on-3 opportunities. Wichita goaltender Evan Buitenhuis proved to be a tough nut for the Mavericks to crack, stopping 34 of 35 shots.

For most of the game, the Mavericks were uncharacteristically passive in all three zones. For much of the first period, neither team was able to establish much in the offensive zone. However, Mavericks goaltender Matt Greenfield made several strong saves in the first period.

Despite playing passively, the Mavericks managed to control the puck for most of the period. Unfortunately, their passivity extended to both of their power plays in the first period. Greg Moro had several high danger shot attempts, but as would become a theme for the game there was a Wichita shin pad or stick in the way of nearly every attempt. Jake Bricknell made himself noticeable early on, however, his tenaciousness resulted in a hooking call against the Mavericks with less than a minute in the first period. At the end of the first period, the score was 0-0 and shots were 10-7 in favor of Kansas City.

The second period began with Wichita on the power play, however, the Thunder had trouble establishing offensive zone presence and didn’t get a shot away on the power play. Then, the Mavericks started trying to get too fancy with the puck. Nick Pastujov and Westin Michaud both had instances where they danced around defenders only to have their rush broken up by a stick in the lane. Then, Wichita started a habit of going on odd-man rushes. The Mavericks defense was playing way too loose and they were made to pay. At 6:26 of the second period, while on the power play, the Mavericks gave up a breakaway to Andrew Shewfelt who put the puck past Greenfield to put the Thunder up by one.

Soon after this, the Mavericks started to ramp up the pressure. Their patented hard-edge hadn’t shown itself in the game. That is until Ryan Harrison put a shot on net, then gave the puck a few jabs after Buitenhuis had covered it up. Several Thunder players took exception to him and got in his face. Harrison, never easily intimidated, stood his ground in the face of the opposition. However, no fights came out of this particular altercation. Shortly after this, Koletrane Wilson blatantly collided with Buitenhuis who fell back and knocked the net off of its moorings. However, no call was made and none of Buitenhuis’s teammates came to his defense.

The Mavericks would continue peppering Buitenhuis with nothing to show for it. Brayden Watts lit the lamp for his second goal of the season on a 3-on-2 after picking up a no-look pass from Tim Soderlund to extend the Thunder lead to 2-0. The Thunder onslaught ended with 41 seconds remaining in the period when Carter Johnson scored to make it 3-0. But before the arena announcer could even announce that goal, Ryan Harrison shot a puck that sailed through Cam Clarke’s glove and made the game 3-1. The second period would end and shots would be 21-17 in favor of Kansas City.

Ryan Harrison has us on the board with 13 seconds remaining in the second! pic.twitter.com/QfodGTvgTU

It was clearly difficult for the Mavericks to come into this game after the preceding night’s game was filled with so much emotion. Coach Tad O’Had was upbeat after the loss, however. He seemed to see the loss as more of a learning opportunity than a setback.

“We still have growth to do,” said O’Had “you know [Saturday] night was an exciting game but it showed that we still had a lot of things that we needed to refine and today was a reminder of that as well.”

The failure to produce on the power play was perhaps the biggest contributing factor to the Mavericks’ loss on Sunday. Unable to produce on 11 power-play shots, the Mavericks seemed to lose any sort of wind they may have had in their sails after Wichita killed the second 5-on-3 opportunity. O’Had felt that his team was not “making Buitenhuis’s life difficult enough” and were not generating enough traffic in front of the net, especially on the power play.

Though O’Had characterized the loss as a “step back” he is excited for Tuesday’s rematch between the two teams.

“It’s great we get right back at it on Tuesday with them so we’ll give the guys the day off [Monday] and we’ll go over video on Tuesday morning talk to them about what needs to be better but you know it’s great that we get to see them again and kind of right the ship. These are good tests early in the season, I’d rather have them early in the season than later on and so I’m excited to play them again on Tuesday.”

The Mavericks are back in action on Tuesday night as they take on the Wichita Thunder on home ice in Independence. The puck drop for that game is 7:05.

Dan Stilley covers the Kansas City Mavericks for Field Pass Hockey. Follow and interact with him on Twitter @FPHMavericks.