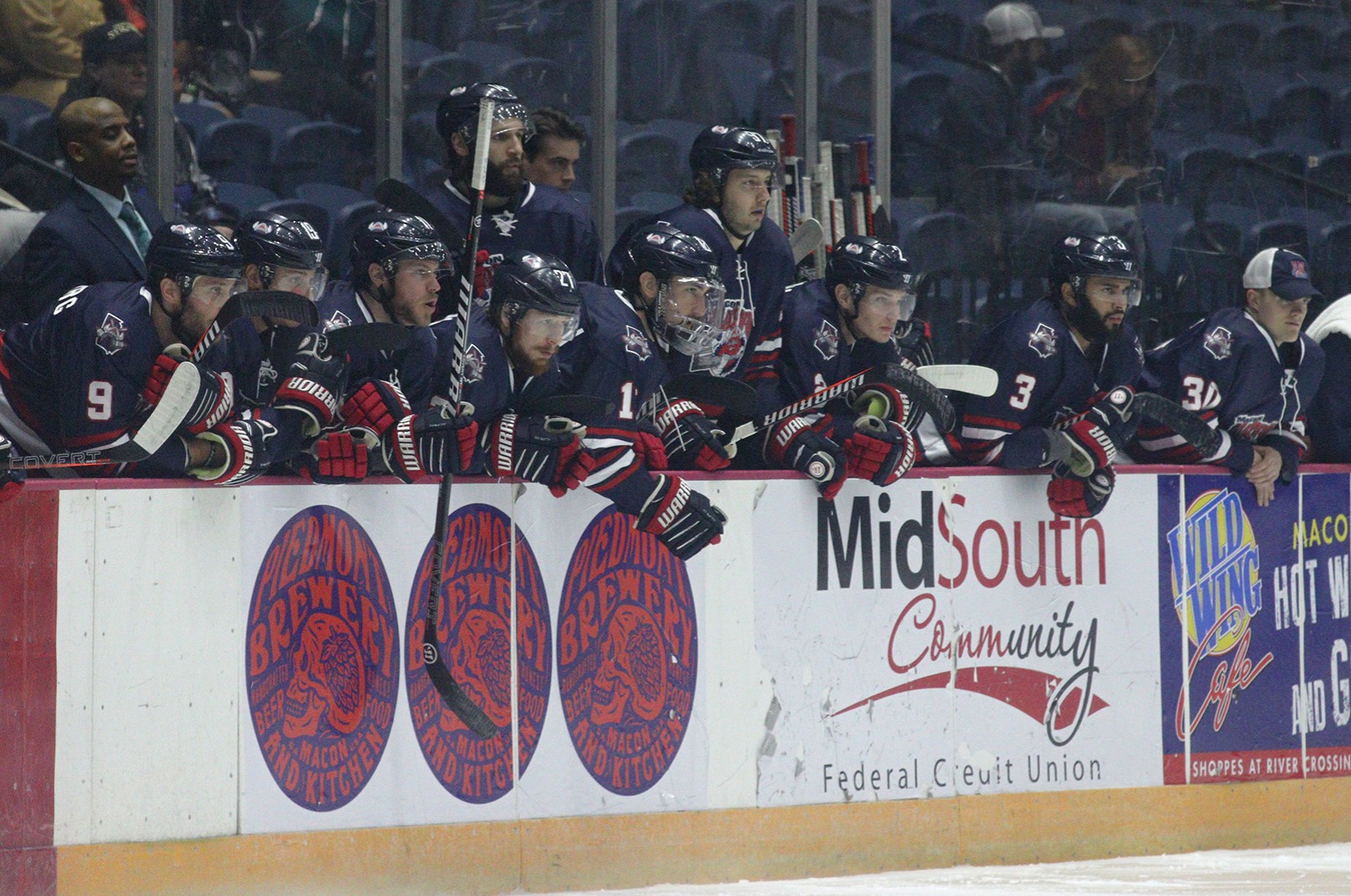 MACON, Ga. – It didn’t take long for Macon Mayhem general manager Blair Floyd’s phone to start ringing on Tuesday. After the team parted ways with head coach Leo Thomas earlier in the day, interest had already started to warm from those interested in being Macon’s next head coach.
By 6 pm, at least ten coaches with varied backgrounds had already contacted the Mayhem.

“I had ten phone calls by 6 pm (Tuesday). There’s people from the FPHL that have reached out, coaches that were let go in the (ECHL) last year that reached out, people coming from Europe,” Floyd said. “There’s good quality coaches out there, it’s just finding the right fit here in Macon.”

The hiring of that next coach will now become another facet of the franchise in the coming weeks and possibly beyond as Macon hosts Evansville for a pair of games this weekend with interim head coach Ryan Michel behind the bench.
Macon and Thomas parted ways Tuesday following a 2-6-2 start to the season, a move that was made by team owner Bob Kerzner, as the Mayhem clarified in a social media post on Wednesday afternoon.

“Last year, you look at our record, we started off 17-3 and finish 27-24-2, it means we finished with a 10-21-3 record and started off this season at 2-6-2 and kind of picked up where we left off,” Floyd said. “Our expectations, with having (former head coach) Kevin (Kerr) here, we want to win championships. We don’t want to be last in the league.”

Don’t expect Macon to rush this coaching search. Floyd indicated as much on Wednesday, pointing toward the fact that the hire will be for a coach to be behind the bench long term and not a band-aid to ride the rest of the season out.

“We haven’t really set a timetable, per se. We’re going to give it a few weeks with Ryan. We want to make sure that we evaluate the next coach very well, we’ll put them through a process, we’ll interview them, check references and everything. We don’t want to make a knee-jerk reaction and bring the wrong guy in here. We want to make sure the plan we put in place is viable long term. We don’t want a band-aid, we want the person to come in and be here long-term, build the team and roll into next year.”

Whoever Macon hires, they’ll come into an organization whose fans have experienced success and want to see more of it. In their second year, the Mayhem won both the Coffey Cup for the league’s best record as well as the President’s Cup title. A year later, after falling to Huntsville in the semifinal round, head coach Kevin Kerr departed for Greenville in the ECHL and Thomas was tapped as head coach. Macon started strong, only to slump to sixth in the standings and losing to Knoxville in the first round.

“Once you get that taste, you want another one. I’ll never be able to put that feeling into hard work when we won, after a year of hard work and it culminating,” Floyd said. “That feeling that you get, it’s like a high that you are chasing. You want to be on top. The other part of that is that fans want to be on top, they’ve experienced it.”

So what could the Mayhem look for in their next head coach? It could be someone who has head coaching experience, or someone who does not. It helps that the SPHL has a recent reputation for developing quality coaches that have gained notice by ECHL clubs.

“One thing that’s really important to look at for the SPHL, especially with us, you have Brad Ralph who coached with us in Augusta, he’s had a great tenure in the ECHL and was in the WHL for a year or two,” Floyd said. “You have Kevin Kerr in his second year in Greenville, Jeff Pyle was in Evansville and he’s up there (in the ECHL). People realize we are not the league we were six years ago.”

Hiring a current assistant coach would not be a departure from one school of thinking in the SPHL.

“It’s important, but I wouldn’t say that it’s the end-all, be-all. There’s a lot of great assistant coaches out there that are ready for the opportunity. Maybe they’ve coached at a university for a few years or been an assistant for a few years,” Floyd said. “You look at Jeff Carr in Knoxville, he’s a great example of that, Jesse Kallechy,what he’s doing in Fayetteville.”

The Michel era gets started tonight as the Mayhem host Evansville, for the first of two games this weekend. Faceoff tonight is set for 7:35, tomorrow’s is at 7 pm.
Stay in touch with all things Macon Mayhem by following Brad Harrison on Twitter @SinBinMayhem. You can also stay plugged in with all the latest SPHL news, by giving us a “like” on Facebook!