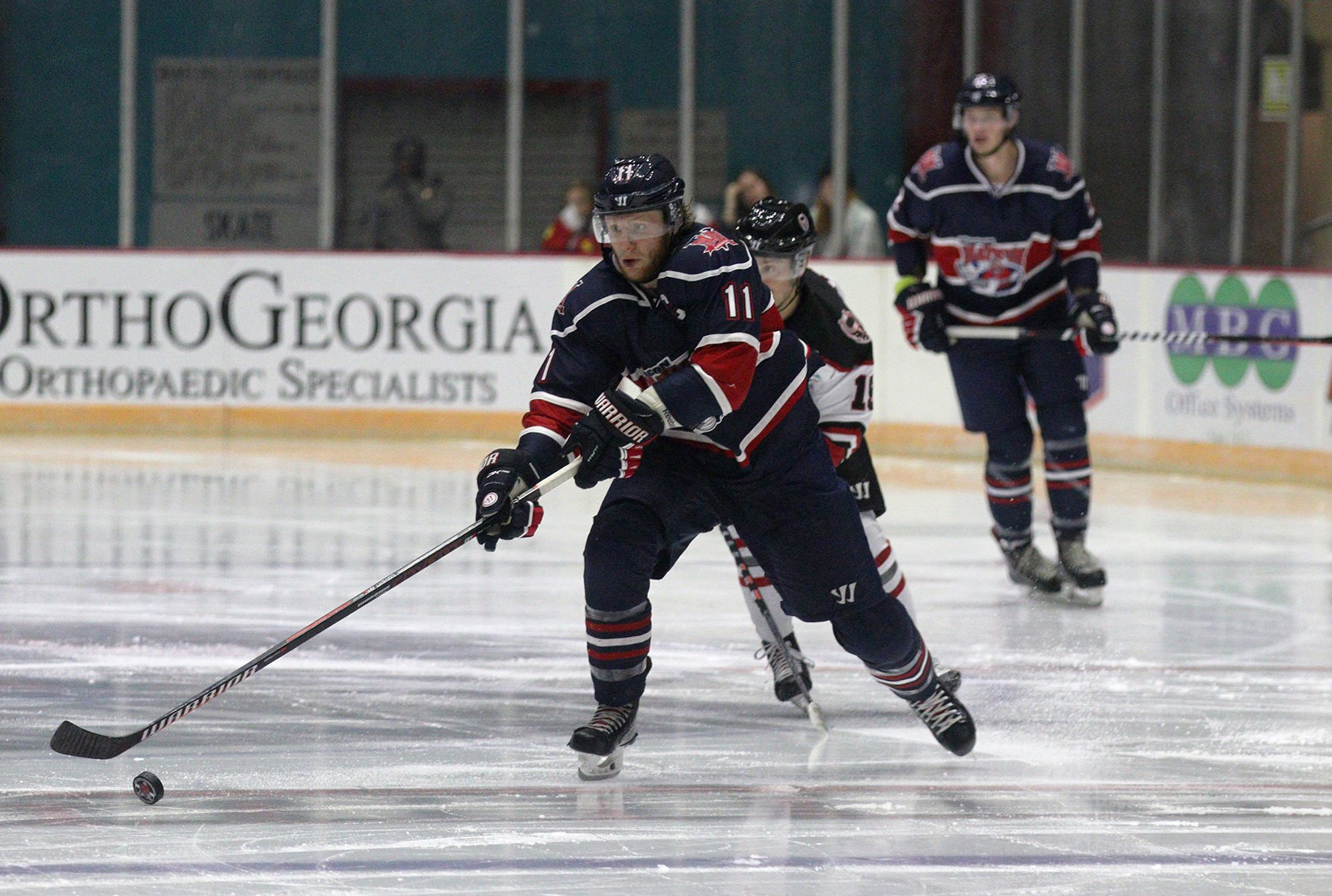 MACON, Ga. – For anyone associated with the Macon Mayhem that was within its locker room last year, the team’s current state is familiar, even if it’s not pleasant.
Having now lost six in a row, the Mayhem are mired in their longest losing streak since last January and February when the Mayhem lost eight straight, albeit two of those losses were in overtime.
That streak, by the way, didn’t last. Macon snapped it Feb. 21 with a win against Evansville, which the Mayhem ironically host next weekend for a pair of games.
Despite the string of losses, Macon has a degree of confidence that it can pull itself out of the depths of the SPHL standings. The Mayhem are 2-6-2, good currently for next to last place in the standings.
With a week of practice ahead of the Mayhem, the goal now becomes smoothing out the factors that have contributed to the recent losing streak.

“They battle, they’re not giving up. I think at times they are getting frustrated, everybody’s getting frustrated, either we’re not getting bounces or we’re getting chances and it’s not going in the net,” Mayhem head coach Leo Thomas said. “The only thing that’s going to get us out of this is to continue to battle.”

The Mayhem fell 4-3 on Knoxville on Friday after falling behind 4-1 in the first, while a pair of power-play goals sank Macon on Saturday against Birmingham. The Bulls scored the go-ahead goal in the third before adding an empty-net goal to win 5-3.

“I thought we played well (Saturday) and battled hard,” Thomas said. “We still gave up too many shots which we didn’t want to do, but our guys hung in there.”

One area that could lead to Macon getting back on track this weekend? Consistency.
In addition to last Friday, the Mayhem had also been riddled by stretches of recent contests in which things came unraveled. The weekend before last, when Peoria came to Macon to take a pair of wins, the Mayhem gave up four second period goals while on Saturday, three unanswered goals gave Peoria the win.
In other words, Macon’s in search of a full 60-minute effort. The Mayhem got that in some ways last weekend against Birmingham before a chaotic exchange in the third period resulted in the game-winning goal for the Bulls.
Macon will also look for its early scoring punch to continue. Marcus Ortiz has taken on the role as a leader for Mayhem’s scoring lines with a team-best six goals. His eight points are second on the team to Stephen Pierog, who leads the time in that category with nine – all on assists. Pierog is also second in the SPHL in assists.
Macon has also gotten good early production from Stepan Timofev, who, along with Daniel Perez, gets the nod so far for the best newcomer to the Mayhem. He has two goals and two assists on the season. Both of those goals came last Friday against Knoxville, and it’ll be interesting to see how getting that first-goal barrier knocked down will help him moving forward. Speaking of Pierog, his plus-two plus-minus rating is tied for the team lead with Jarrett Kup, who is expected to provide strong two-way play with two goals so far on the year.

“I believe in this group, it’s up to us to get out of it,” Thomas said.

Look for Macon to rely on Kevin Entmaa and Alex Fotinos in goal with Entmaa having returned from the ECHL and Cody Porter being released from his three-game tryout…Entmaa’s .927 save percentage is fifth-best in the SPHL…Perez’s 32 shots rank second among SPHL rookies…Macon plays eight of its next ten at home before five of six on the road starting Dec. 26.
Stay in touch with all things Macon Mayhem by following Brad Harrison on Twitter @SinBinMayhem. You can also stay plugged in with all the latest SPHL news, by giving us a “like” on Facebook!