Even when they trailed by a pair of goals and even when they fell behind again in the third period, the Macon Mayhem didn’t give in. 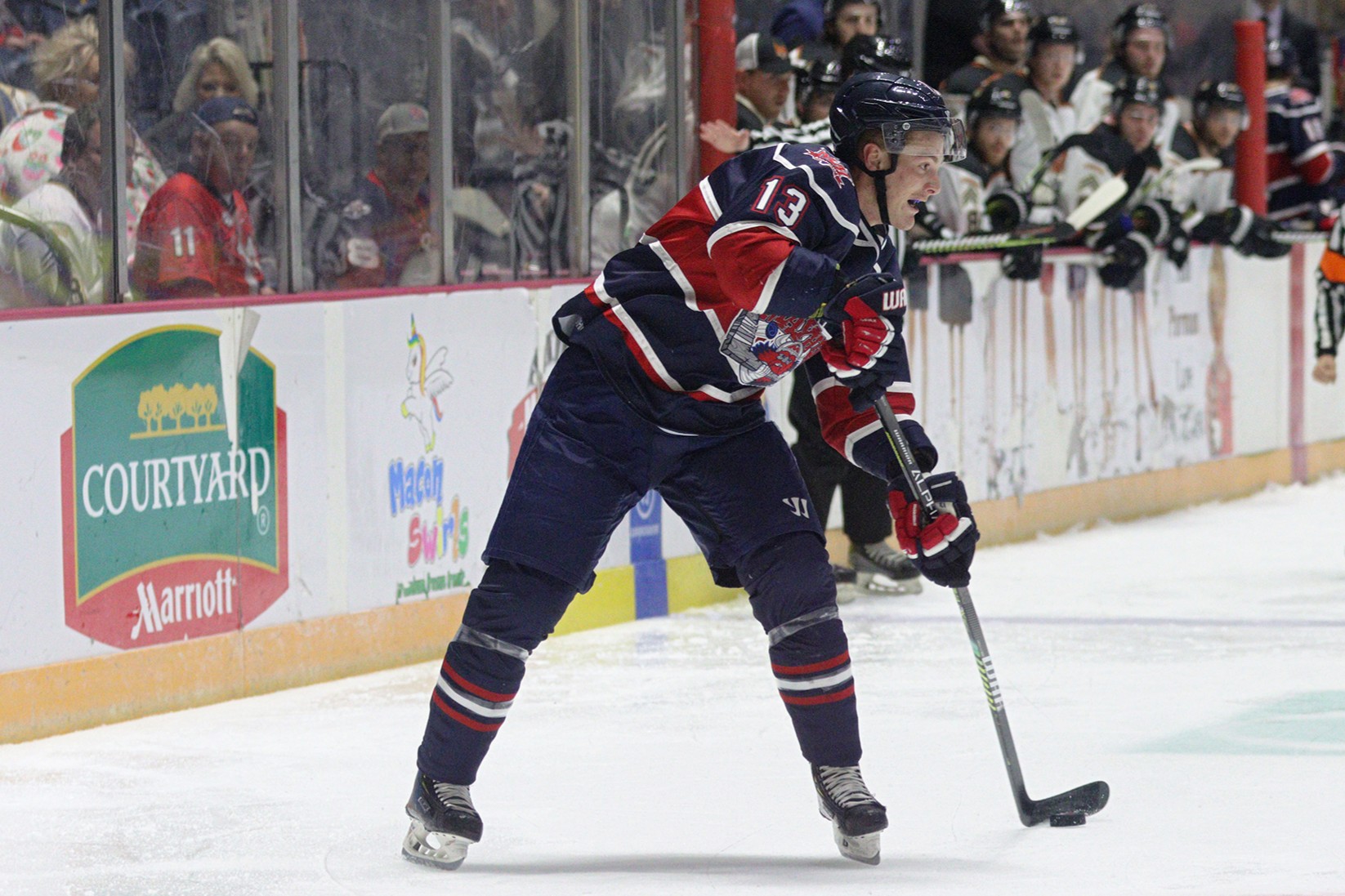 MACON, Ga. – Even when they trailed by a pair of goals and even when they fell behind again in the third period, the Macon Mayhem didn’t give in.
In doing so, Macon (4-11-2, 19 points) scored twice in the final six minutes to snap a five-game losing streak and beat Quad City (4-9-3, 11 points)  by a score of 5-4. The Mayhem were led by three-point nights from Danny Cesarz with three assists and Stathis Soumelidis with a goal and an assist as well as Josh Cousineau’s pair of goals. Macon rallied from 3-1 and 4-3 leads by the Storm to claim the victory.

“Being able to win, that’s huge for us with our confidence,” Mayhem interim head coach Ryan Michel said. “It’s a lot easier to leave the rink with a win than with a loss.”

The same two teams will tangle again on Saturday night in the two-game set that includes the return of Dakota Klecha and Kristaps Nimanis to Macon. Klecha, by the way, served a five-minute major following a fight with former teammate Jarrett Kup. Nimanis also had a scrap with Mayhem forward Jimmy Soper.
Macon got the win despite some shortcomings on special teams, a challenge that both teams faced. Macon was 1-of-7 on the power play and Quad City was 0-for-4. The Storm’s first goal actually came short-handed 12:09 into the game by Stephen Gaul. But Macon’s power-play goal was one that counted big. When Soper’s shot got past Ryan Mulder 13:17 into the third period, it tied the game at 4-4.

“It’s been a long time coming. We’ve been working hard during the week and it’s great to finally get one,” Soper said. “We have the group here and leadership and guys that want to win.”

It set the stage for 2:08 later. Cousineau’s blast from the blue line found its way to the back of the net and Macon led 5-4. From there, the Mayhem held on, outlasting a 5-on-3 as time expired to get the much-needed win.

“We battled back, there was definitely a lot of adversity,” Michel said. “It was just a constant response to keep moving forward no matter what.”

As odd as it may be to believe, neither team that got much going on offense through the first 40 minutes and the game was tied 1-1 through periods with Shawn Lynch scoring in the second.
That all changed when the third period began, and those fortunes did not exactly favor Macon. Within 1:25, a pair of Storm goals by Mathias Ahman and Ludlow Harris, Jr. off turnovers in the Mayhem zone made it 3-1.
Macon rallied.
After mostly coming up empty, Macon took advantage when the puck put on net by a Cesarz shot was knocked past Mulder by Stathis Soumelidis to trim the Quad City lead to 3-2. Just 21 seconds later after what was the first of Cousineau’s two goals, the game was tied before Stephen Gaul got the puck past Macon goalie Kevin Entmaa for the 4-3 Quad City lead.
But Macon showed its resiliency, a trait that on Friday, unlike previous recent games, resulted in a win.
They’ll go for another tonight.
Stay in touch with all things Macon Mayhem by following Brad Harrison on Twitter @SinBinMayhem. You can also stay plugged in with all the latest SPHL news, by giving us a “like” on Facebook!