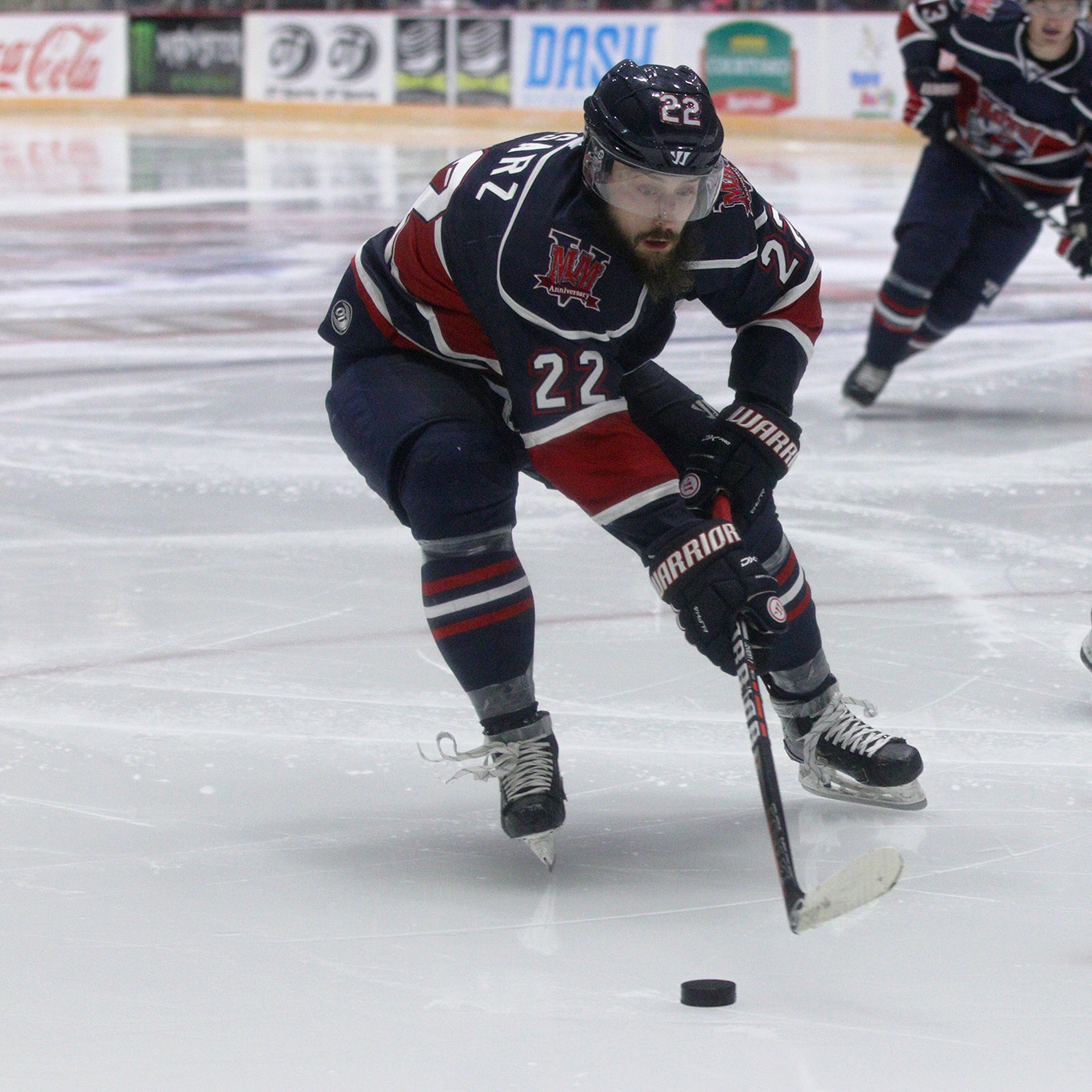 The past four games for the Macon Mayhem have seen losses in as many contests and a slip to eighth place in the SPHL standings.

MACON, Ga. – The past four games for the Macon Mayhem have seen losses in as many contests and a slip to eighth place in the SPHL standings. Each of those losses, coming in the past two weekends, came to Peoria.
Now, Macon looks the rebound following 5-3 and 5-2 defeats at home over the weekend. And despite the string of losses, there’s much to build off of. Macon is 2-4-2 with six points, eighth in the SPHL standings.
If nothing else, the Mayhem showed some tenacity at home against the Rivermen. A weekend ago, Macon went to Peoria and came home empty-handed in more ways than one, failing to score a goal in 3-0 losses.
Macon appeared eager to prove a point on their home ice. On Friday, the Mayhem got the game’s first score by way of Danny Cesarz. On Saturday, Daniel Perez knotted things up in the second period at 1-1 with Cesarz making it two goals in two games to tie the game 2-2 before the Rivermen controlled the third period to win.
Speaking of being eager, there was plenty of animosity to go around on Friday. A whopping 110 penalty minutes were doled out on both sides, including a melee at the end of the first period in which a total of seven players on both sides were tagged for penalties, a scrum that boiled over when Peoria goalie Eric Levine and Macon’s Stepan Timofeyev exchanged pleasantries. By the time that the teams headed to the locker room, Peoria’s Skyler Smutek and Mitchell McPherson and Macon’s Zach Urban had been whistled for game misconducts, and Levine was assessed a five-minute fighting penalty.
The back and forth continued 12:59 into the second period with Timofeyev and Peoria’s Zach Nieminen exchanging blows. The second period also saw the Rivermen blow the game open with four goals.
Macon, however, showed a different brand of fight, getting within two goals on scores by Rene Hunter and Jimmy Soper. That energy carried over to Saturday with the Mayhem leading and being in a position to win going into the third period before a trio of Rivermen goals extinguished those hopes.
Macon may not have gotten a win this past weekend, but its play coming off back-to-back shutouts may have been the next best thing.

With Kevin Entmaa with Orlando of the ECHL, look for Macon to roll with the goalie combo of Alex Fotinos and Cody Porter. Each yielded five goals – Fotinos stopped 23 of 28 shots on Friday and Porter turning away 21-of-26. Until either of them are able to turn in a string of dominant performances, look for both to get chances in net as long as both are in Macon. Porter joined the team last week via a three-game tryout.

Lost perhaps over the weekend for Macon was the offensive surge of Cesarz, who scored two goals in as many games with a different group on the ice each time. On Friday, he was set up with Marcus Ortiz and Caleb Cameron while Saturday’s goal came with Josh Cousineau and Perez on ice with him.
Perez, by the way, is tied for the team lead in points with seven (three goals and four assists) while Stephen Pierog has all seven points on assists.

Macon has activated defenseman Ryan Devine from the injured reserve and placed Hunter, also a defenseman, on team suspension. Devine was placed on the IR following opening weekend.

Urban leads all Macon defensemen on points and penalty minutes…Fans can support the Macon Mayhem Booster Club on Tuesday night as 10 percent of purchases from 4 pm to 8 pm at Texas Roadhouse support the booster club…Macon plays at home for ten of its next 12 games.

The Mayhem host Knoxville on Friday and Birmingham on Saturday.