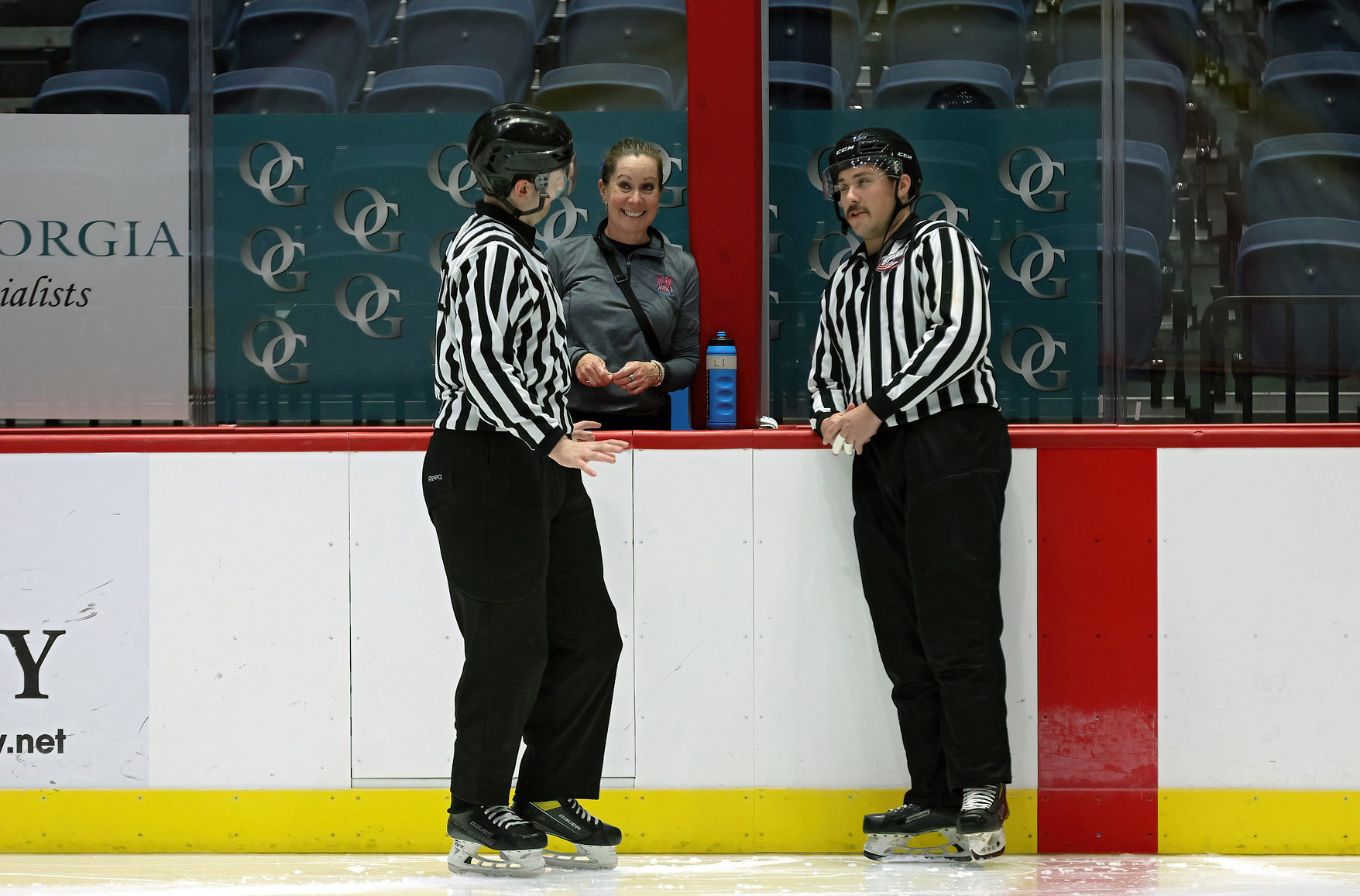 Mayhem’s West Back As Trainer After Summer In Baseball

Mayhem’s West Back As Trainer After Summer In Baseball

MACON, Ga – In the SPHL, one of the final rites of any season comes after the final game is played, as many players and staff pack up their belongings and head back home for the offseason. In rare cases, however, some will stay around the place that for at least the past season was home.

That extended beyond the Macon Mayhem player roster last year as Cynthia West, the team’s athletic trainer since the 2020 season, stuck around town to take on the same duties for a totally different sport. She was also named the SPHL’s 2021-22 Athletic Trainer of the Year.

With hockey in the offseason, the sports landscape of Macon shifted a line or so from the Macon Coliseum to historic Luther Williams Field, home of the Coastal Plain League’s Macon Bacon. It was there this past summer that West took on athletic-training duties for the team in the collegiate summer league.

With a background in athletic training that includes high school sports, meeting the needs of players was nothing new for West, a Texas native.

“I knew that it’d be different. I do not miss working outside in the hot months. Going in, I wasn’t going to enter into it knowing I would not be happy. I was honest with them, I told them that I enjoy baseball, but hockey is my favorite.”

Coming aboard with the Bacon had actually crossed West’s mind the summer before as a paying customer at a Bacon game. Then, however, the season was well underway. But that thought was not forgotten as this past summer approached.

“I needed a job. I thought about it last summer and just waited too late. It just seemed like an untapped source,” West said. “I was enjoying a Bacon game and it didn’t seem like there was an athletic trainer visible. When you’re an athletic trainer, you kind of know. We tend to have a look about us.”

Then, prior to this summer, with the help of Dr. Dan Erthal who provides chiropractic services for the Mayhem and Bacon helped direct West toward the baseball operation’s key leaders.

“I reached out and introduced myself and told them that I had summer availability if they had a need,” West said. “I was lucky enough that they did.”

One of the biggest ways that athletic training differs from baseball to hockey, West says, is the types of common injuries.

“Each sport always has a little bit of a different nuance. There is always something a little bit different,” West said. “I’m fortunate that I have worked with a lot of different sports. Because of that, I was not ill-prepared. For me, it was nice because it helps you keep things fresh. With hockey, you see a lot of shoulder and upper-body stuff. With baseball, it’s a lot of shoulder stuff, but completely different in the shoulder with injuries in the elbows, too.”

This’ll be season three for West in Macon, who arrived in January of the 2020-21 season that began in late December with a limited number of teams playing due to COVID-19. The Mayhem were among them for West, who actually got interviewed for the job while on vacation in Wyoming, first by then head coach Kevin Kerr.

“Interestingly enough, I was on a holiday in Wyoming when I got the original call from Kerr to ask me about the job and to pick my brain and such,” West said. “On New Year’s Eve afternoon, I had a two-hour phone interview with Blair (Floyd,) Macon’s then-General Manager). The long and short of it was, ‘when you can be here?’ ”

Since, a level of trust has been developed between West and Mayhem players, even if they are far away during the offseason.

“Even when guys go home, I get messages in the summer,” West said. “It makes me feel good that they trust me enough to still ask, even when they are something thing 18 hours away.”

The Macon Mayhem return to the ice this weekend, hosting Roanoke on Friday and Saturday at the Macon Coliseum.