DES MOINES, Iowa – The Iowa Wild returned home after a successful trip to California that saw the team win two of three games.

DES MOINES, Iowa – The Iowa Wild returned home after a successful trip to California that saw the team win two of three games. Friday, they kept the hot streak alive, defeating the Grand Rapids Griffins thanks to two goals by star forward Gerald Mayhew. Colton Beck also set a historic mark for longevity with the team, and Kaapo Kahkonen made 26 saves. The victory kept the Wild a point behind the Rockford IceHogs for second place in the Central Division. 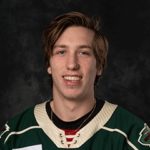 It was a familiar scene early on as the Griffins scored first. At the 15-minute mark, Josh Atkinson took a penalty for holding and Grand Rapids scored 21 seconds later. Matt Puempel skated backwards along the boards deep in the Wild end. Just before moving behind the net, he fed Eric Tangardi in the slot, who blasted the one timer by Kahkonen for his fourth goal of the year.
The lead did not last long, however. With just over three minutes left in the period, the Wild tied the score. Kyle Rau carried the puck into the Griffins end, firing a shot that Grand Rapids goaltender Jimmy Howard saved. The rebound fell in front of Howard, where Beck gained control, jamming it in for his second goal of the year. It was the 300th career game for Beck in an Iowa Wild uniform, setting a franchise record.
The Griffins had a golden opportunity retake the lead with seconds left in the first, when a great feed sent Givani Smith in on a breakaway. He was able to get the Iowa goaltender to move to his right before he tried to tuck the puck in the opposite corner of the net. However, Kahkonen was able to make an amazing save, doing the splits so he could just reach his pad far enough to stop the puck with just 1.3 seconds left in the frame.
It was a moment that had a huge psychological lift for the team, Head Coach Tim Army explained after the contest. 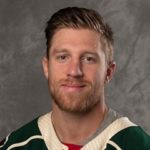 In the second, Will Bitten gave his team the lead for the first time in the contest. At 3:06, Connor Dewar fired the puck along the boards into the Grand Rapids end. Howard came out to play it, but Bitten beat him to the puck, then quickly moved in front to tuck the puck into the empty net before Howard could scramble to try to get back into the play.
Just as Iowa had in the first, the Griffins responded right away, this time scoring 26 seconds after the Bitten tally. Grand Rapids won the ensuing draw and was able to maintain control in the Iowa end. Dominik Shine blasted a shot from the point that Matthew Ford deflected by Kahkonen for his fifth goal of the year, tying the score at two.
The Griffins had controlled play through much of the first two periods, outshooting the Wild 24-17, but Iowa took control in the third. They allowed Grand Rapids just four shots on net, including none in the final nine minutes of the game. 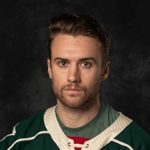 With the Grand Rapids offense shutdown, Mayhew gave his team the deciding goals. The first came at 7:35. Bitten set up the opportunity by making a great play to stop a clearing attempt, reading it perfectly before intercepting the puck. Seconds later, he had the puck on his stick again, passing it behind the net to Rau. Rau fed the puck to Mayhew who was alone in the slot. The puck bounced off Mayhew’s stick, but the Wild star remained cool, pulling it in before firing a blistering wrist shot that found the upper corner of the net for his 15th goal of the year.
With the clock winding down, the Griffins pulled Howard for the extra attacker, but they would be unable to set up a scoring chance. Bitten and Mayhew were relentless with the forecheck, keeping the puck in the Grand Rapids end for much of the final minute.
With 35 seconds left in the game, the Griffins got the puck to center ice, but Mayhew made the steal, then fired a shot that found the back of the empty net, sealing the 4-2 victory. That was his third two-goal game of the season. Mayhew is now second in the AHL in goals.
Bitten finished with a goal and two assists, giving him three points in a contest for the first time since January 18 of last season. Rau extended his point streak to seven straight games (goal, 10 assists).
After the contest, Coach Army talked about the recent success of the team.

These two teams will square off again on Saturday night. The puck drops at 7:00pm CST.
Follow Robert on Twitter for all the latest Iowa Wild news and notes. Don’t forget to smash that “like” button for The Sin Bin on Facebook — your number one news source for AHL, ECHL, and SPHL minor league hockey coverage!