Gerald Mayhew returned to the Iowa Wild to lead the team to a 4-3 victory over the Grand Rapids Griffins. Mayhew scored two goals and added an assist.

GRAND RAPIDS, Mich. – Gerald Mayhew returned to the Iowa Wild on Wednesday night and picked up right where he left off, recording three points, including the game-winning goal in overtime as the Wild defeated the Grand Rapids Griffins, 4-3. Mayhew returned after spending six games with the Minnesota Wild, adding two goals and an assist. Kaapo Kahkonen also returned to Iowa, earning his fifth victory of the season with 35 saves.

Things got off to a tough start for the Wild as they fell behind just 2:58 into the contest. Dominic Turgeon fired a wrist shot from the point that Filip Zadina tipped past Kahkonen for his second goal of the season.
The one-goal lead held into the second when the Griffins extended their lead to two. At 6:58 of the frame, Ryan Kuffner raced to gain control of the puck near the right boards in the Iowa end. He quickly passed to Gregor MacLeod, who moved in on Kahkonen before firing a wrist shot over the Wild goalie’s shoulder for his second goal of the year. 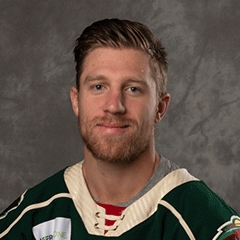 The pre-Halloween affair had Grand Rapids in control but Gabriel Dumont, who also recently returned from Minnesota, tamped down that enthusiasm when he scored just 41 seconds after MacLeod’s goal.
With the Wild short-handed, Brennan Menell dumped the puck into the Grand Rapids end. Griffins goaltender Calvin Pickard moved out of his net to play the puck, but quickly realized he would not make it to the puck before Mayhew arrived. Mayhew quickly fired the puck in front as Pickard regained his position. The pass was a perfect one to Dumont who was cruising down the slot. He blasted the one-timer in for his fourth goal of the season to make it a 2-1 game.
The tally got the Wild fired up as they tied the score just after the 11-minute mark. Mayhew came down the right side then used a burst of speed to move quickly as he went behind the net. He sped to the opposite side where he shoveled the wraparound chance into the net for his fourth goal of the season. The highlight goal tied the score at two.
In the third, Iowa used the man advantage to take their first lead of the game. Just before the seven-minute mark, a wrist shot from the point was knocked down in front of the Griffins net, but Dumont battled for the loose puck, punching it in for his second goal of the game. 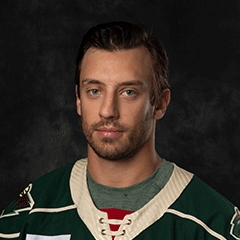 Joe Veleno tied the score a little more than six minutes later. Chris Terry’s shot was knocked down in front and came to Matt Puempel at the side of the goal. He tried to knock to the puck in on the short side, but Kahkonen was able to make the save. The puck squirted free to the other side of the goal where Veleno was able to knock it in for his second goal of the year.
That sent the game to overtime where Mayhew would win it just 33 seconds into the extra frame. The Wild forward stole the puck near the Grand Rapids blueline, heading in on a breakaway. He looked like he was going to the forehand, then quickly pulled the puck to his backhand, tucking it just between the post and Pickard’s leg for the game-winner, which snapped the team’s two-game road losing streak.
With his two goals and an assist, Mayhew now has five goals and four assists in five games this year. Dumont added two goals as well. Menell chipped in three assists.
The Iowa Wild (6-1-2) remains in first place with 14 points, a point ahead of the Chicago Wolves. Game six of their seven-game road trip continues on Friday when they take on the Milwaukee Admirals. The puck drops at 7:00 PM.