DES MOINES, Iowa – Gerald Mayhew scored the game-winning goal with about 10 minutes left in Tuesday night’s contest as the Iowa Wild (31-14-6) won their franchise record seventh straight game, a 2-1 victory over the San Antonio Rampage. Kaapo Kahkonen made 31 saves in the contest to earn his AHL-leading 20th win of the season.
In the first period, each team would earn a goal on the man advantage. At 5:42, Iowa took the lead when Luke Johnson scored his 10th goal of the year. 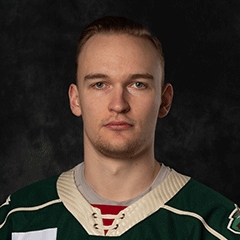 With the faceoff in the San Antonio end, the Rampage won the draw and were trying to clear the puck out of their zone, but Sam Anas made a great play to keep the puck from leaving the San Antonio end.  He moved along the boards before making a cross-ice pass to Johnson near the left faceoff circle. Johnson gained control of the puck, then fired a blistering wrist shot that beat Ville Husso up high to give Iowa a 1-0 lead.’
With the assist, Anas extended his consecutive point streak to six straight games.
A little less than four minutes later, the Rampage tied the score. Just 12 seconds after going on the power play, Derrick Pouliot had the puck along the blueline. He fed it to Joey LaLeggia near the boards, who fired a wrist shot that beat Kahkonen over the left shoulder for his fifth goal of the year.
The Iowa Wild had dominated much of the first period, outshooting San Antonio 15-6. Husso had been the difference, however, making a number of big saves. 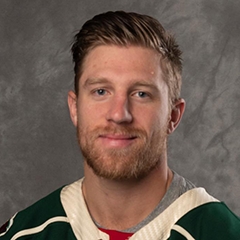 In the second, it was Kahkonen’s turn to shine. The Rampage took control of play, peppering the Wild netminder with 15 shots, including a stretch where he faced eight shots in 3:25. The San Antonio forecheck was relentless, as the Rampage took 12 of the final 15 shots in the frame.
San Antonio continued to pressure into the third, taking the first seven shots of this period. Kahkonen had been brilliant all season long for the Iowa Wild, but he was in a zone, making one save after another.
After killing off a Rampage power play, the Wild began to turn the tide. Nico Sturm nearly put his team back on top when he fired a rising shot that Husso was able to slide over and block with his chest protector.
At 9:28, a great deflection by Mayhew put the Wild ahead for good. Brennan Menell gained control of the puck coming out of his zone, lofting a pass toward Sturm on the other side of the ice just before he entered the San Antonio zone. Sturm skated down along the boards near the goal line. Seeing Mayhew head toward the net, he fed the puck toward the crease where Mayhew tipped it up and in for his AHL-leading 36th goal of the season.
For some reason, the goal was initially waved off. After the referees reviewed the play, they awarded the goal to put the Iowa Wild on top, 2-1.
Holding the one-goal lead, the Wild simply clamped down on the San Antonio offense. After recording 24 combined shots through the second and first seven minutes of the third periods, the Rampage mustered just two shots in the final 13 minutes against Kahkonen.
The victory was the seventh straight at home for the Wild, extending their franchise record. Menell finished with two assists in the contest, giving him five points in his last three games.
The Wild continue their nine-game homestand on Friday with the first of a pair of games against the San Diego Gulls. The puck drops at 7:00pm CST.
Follow Robert on Twitter for all his news, notes, and insights regarding the Iowa Wild! Don’t forget to also follow The Sin Bin on Twitter and Facebook for all additional AHL, ECHL, and AHL minor league hockey coverage!