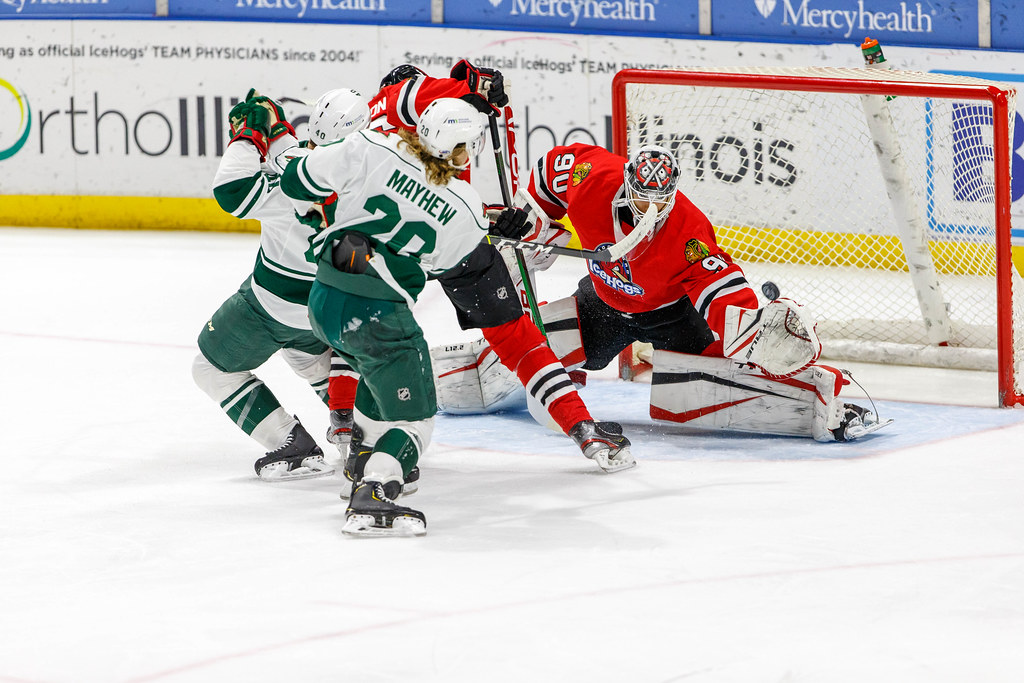 ROCKFORD, Ill. – Gerry Mayhew showed the offensive spark that earned him last season’s AHL MVP award Sunday night, pacing the Iowa Wild to a 5-3 win over the Rockford IceHogs. Mayhew, who was recently assigned to the Wild from Minnesota, scored twice and added an assist as the Wild broke a five-game winless skid.

Rockford’s two-game win streak was snapped in the first of two home contests with Iowa. Cody Franson had a goal and an assist in the losing effort.

An interference penalty by Reese Johnson set up the first goal of the contest. Iowa quickly set up in the offensive zone. Mason Shaw sent a puck on net from the right dot. Hogs goalie Matt Tomkins stopped that shot as well as Gabriel Dumont‘s put back attempt. Mayhew knocked in the loose puck at 9:30 of the first period to give the Wild a 1-0 advantage.

The IceHogs tied the game early in the second period following Johnson’s faceoff win in the neutral zone. Franson gathered in the puck and fired from just inside the red line. Iowa goalie Hunter Jones whiffed on the long-distance offering, resulting in a 1-1 game 3:47 into the middle frame.

Rockford took the lead on the man advantage later in the second. MacKenzie Entwistle redirected a Franson shot past Jones at the 12:44 mark. That 2-1 lead was short-lived, as Mayhew potted his second goal of the night with a wrap-around attempt. Tomkins made the initial pad save, but the puck was raked across the goal line by the goalie’s stick at 14:17 of the second.

Early in the final period, the IceHogs gained a 3-2 advantage when Rockford captain Garrett Mitchell received a pass from Mitchell Fossier at the left dot. Mitchell’s shot was low and to the far side of the net at the 1:37 mark.

The Wild responded quickly, getting the equalizer from Tyler Sheehy. The rookie potted his first AHL goal, tipping in Dumont’s feed at 3:07 of the third. Five minutes later, Dumont one-timed a Sheehy pass from the high slot past Tomkins for a 4-3 Iowa lead eight minutes into the period.

The Hogs were unable to pull even in the final twelve minutes of action. Tomkins was pulled in favor of an extra skater with 1:47 remaining to no avail. Shaw found the empty net with 15 seconds left to seal Rockford’s fate.

Jones picked up his first win of the season, stopping 33 IceHogs shots. The Hogs and Wild clash again tonight. Puck drop is scheduled for 6:00 p.m.