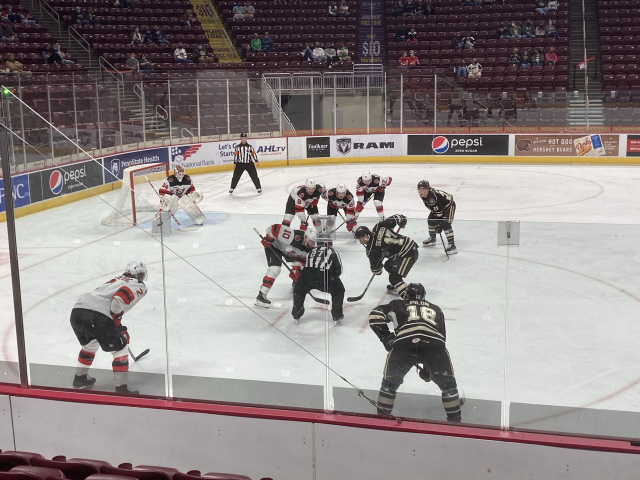 HERSHEY, Pa. – Sunday’s contest between the Hershey Bears and the Binghamton Devils lasted 64 minutes and 59 seconds, just enough time to spare for Hershey forward Connor McMichael to score his second dramatic goal of the game to propel the Bears to a 3-2 overtime victory at Giant Center. McMichael evened the score at two with 53 seconds left in regulation before scoring the buzzer-beater on Hershey’s 51st shot of the day.

It was a tight-checking, hard-fought game between two teams that are very much growing to dislike one another. Fresh on the heels of a 6-5 high scoring affair between the teams on Friday, the Devils continued the scoring that turned a 4-1 Bears lead into a 6-4 deficit at one point. Nolan Foote tallied his fourth of the season on a breakdown in coverage just over seven and a half minutes into the game. The score would stand until the 2:50 mark of the second period when Garrett Pilon scored his own fourth goal of the season, depositing a rebound from a Paul LaDue shot to even the score at one.

Officially ten seconds later, Binghamton reclaimed the lead when Graeme Clarke tallied his fourth goal of the season by tucking home a feed from Ben Street. The Bears and Devils would duel with far fewer goals than Friday’s contest, and with the game coming down to the wire, McMichael popped the loose puck past Evan Cormier to even the score at two apiece. It was McMichael’s first goal since the rookie forward tallied a hat trick back on February 20 against the Wilkes-Barre/Scranton Penguins, and sent the game into extra time.

The overtime winner was something to see. With seconds on the clock, Hershey goaltender Zach Fucale elected to play the puck to McMichael rather than cover it, and the Bears forward streaked down the ice. After his initial shot was stopped by Cormier, Pilon earned his third point of the day by picking up the loose puck and feeding McMichael with a snapshot that just barely beat the clock on this day. Fucale collected an assist on the overtime winner.

Here’s the game-winning goal for Connor McMichael on shot 51 on the night for the Hershey Bears! It’s an overtime buzzer beater! pic.twitter.com/57Gkg7Z4Gr

Hershey put up an impressive total of 51 shots on goal for this game, and Cormier’s performance earned him the game’s second star for his efforts in defeat, while Fucale had 26 of 28 for the game. The McMichael goal prevented Hershey from participating in its first shootout of the season, as the Bears have not yet participated in the skills competition yet this year. It’s Hershey’s second overtime win in six games against Binghamton so far this season. Sunday’s game also marked the AHL debut for Bears defenseman Tyler Nanne, who was injured with Hershey’s ECHL affiliate, the South Carolina Stingrays, in action earlier this season.

Hershey will play on Wednesday when the Bears travel to PPL Center for a matchup with the Lehigh Valley Phantoms, while the Devils are idle until Friday when they host the Phantoms.