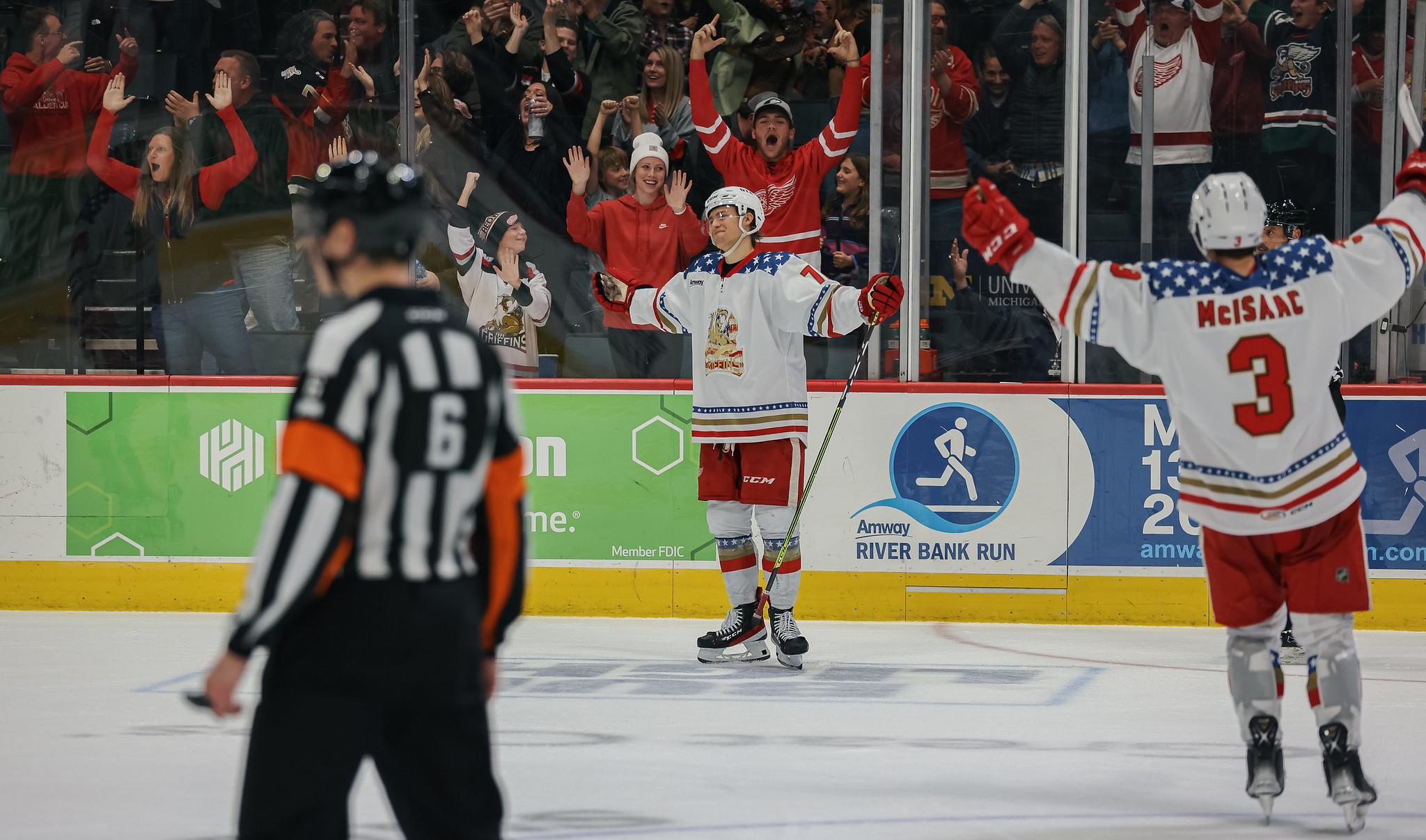 GRAND RAPIDS, Mich. – Following up Friday night’s dramatics, the Grand Rapids Griffins and the Toronto Marlies turned the page with a Saturday night encore. The energy in Van Andel Arena was palpable from the 7,352 faithful in attendance that had their first weekend series since the home opener.

The Griffins turned to Victor Brattstrom in net, while on the other end Dryden McKay made his second American Hockey League start in as many nights following Friday’s game.

Despite more flair for the dramatic finishes, the Griffins ended up dropping the 3-2 result in overtime after a series of mistakes in the extra frame that ended up being costly for the home team’s effort.

It didn’t take long for the Griffins to light a fire on this one – just 1:14 into the game and a bit of patience from Pontus Andreasson on an odd-man rush found Givani Smith for the one-time shot on the rush that beat McKay and put the Griffins up 1-0 early.

The Marlies wasted no time in responding. With Smith and Marc Johnstone sitting for some 4-on-4 hockey, a set dump-in play got the puck to Logan Shaw with speed, who was able to beat Brattstrom to the far post for the tying wraparound goal just two minutes after the Griffins had taken the early lead.

Definitely a goal that Brattstrom will want another go at. 16:29 remaining in the 1st and the game is tied at 1. #TORvsGR pic.twitter.com/yKDf5wN31Z

Just like Friday night’s game, Grand Rapids brought the physicality early and often. They finished their checks heavily along the boards. After the whistle, Smith was in the face of every Marlies player that wanted anything to do with him. Toronto responded in kind with big Curtis Douglas getting in the middle of a crowd of Griffins and offering up face washes to anyone who wanted them.

“We didn’t want them to rest on their laurels, but I do think the game plan was pretty consistent of getting pucks in and being physical and making them defend.” Head Coach Ben Simon said of their approach to Saturday. “Anytime you start to win a few games, you start to get some confidence but you have to make sure you continue what got you that success.”

With the powder keg building up as emotions ran high between these two teams battling to make a statement, they skated into intermission tied at one.

The physical play carried over into the second, with Douglas getting mixed up with Cedric Lacroix in the Griffins’ zone. Lacroix, inserted into the lineup after sitting out Saturday’s game, looked for a dance partner in Douglas but was left alone on the dance floor. More big hits were traded between the two teams, including Smith again making his presence felt by hammering Shaw into the boards that saw Shaw slow to recover with what appeared to be an upper body injury. Fortunately for the Marlies, their captain wouldn’t miss any ice time as a result of the hit.

While the play with the puck ground down to a slog as the heavy play picked up, the best chance of the period came on a Griffins power play. Unfortunately for Grand Rapids, it was coming the other way on Graham Slaggert’s stick. Brattstrom was up to the task however, making the huge save to keep the teams deadlocked at one goal apiece heading into the final frame.

Both teams seemed to turn the pace up to start this one out after a sluggish second period. Four minutes into the period and the Marlies finally broke the ice that had held these teams together for over 40 minutes at this point. Max Ellis slid in between the Griffins’ defenders on a break in on Brattstrom, who made the initial save but couldn’t do much about the rebound sitting in his crease. Slaggert followed the play up to the empty net and a tap-in would give the Marlies the lead at 2-1.

Just a minute later, the emotions that had been brewing all night involving Smith and Douglas finally boiled over. Mixing it up in front of McKay, eventually gloves were lost and Smith dragged Douglas to the ice, where punches were thrown by the Griffins forward. Both players exchanged words heading to the box and didn’t stop conversating once they had taken their seats. The hometown fans loved the action that took place as they tried to rally the Griffins for another third period comeback.

Smith was yelling at him the whole way to the penalty box. Now, they are still yelling at each other in the box. Douglas not happy with the way this fight panned out. pic.twitter.com/34JTnr7PBe

Unfortunately, it’s tough to stage a comeback while down a man. Two consecutive tripping minors from Tyler Spezia and Brattstrom left the Griffins in an undesirable position, but Brattstrom came up huge to keep the Griffins within striking distance with a series of huge saves.

“Of course I wanted to win.” Brattstrom said of his play in net. “Definitely a step in the right direction for me. Stopped more pucks today, definitely happy to do that for the team.”

“I think you’re seeing growth in his game for sure.” Simon said of his goaltender. “I thought overall he had a very solid game tonight. At the end of the day, your best penalty killer is your goaltender, and I thought tonight Victor was very good and made some key stops.”

With just 2:42 to play, Drew Worrad threw a big check along the boards and was given a two minute minor for his troubles, seemingly spelling doom for a team that was down one and now needed to kill a penalty with time winding down. The Griffins penalty killers were up to the task, but with just seconds left they needed a hero.

Look no further than to Cross Hanas. After his heroics last night, Hanas was again the trigger man for the Griffins. With just nine seconds left on the clock, Jared McIsaac fed the puck over to Hanas, who blasted a one timer that beat McKay and sent the Van Andel crowd into an absolute frenzy. His teammates mobbed him and the Griffins had done the unthinkable again – tying this game in the third period to send to overtime. For the second consecutive night, the Marlies were left stunned.

“Since I’ve been here, we’ve always been a team that can comeback and win big games.” Smith said of the Griffins. “So it doesn’t surprise me at all. We just got to keep working. It’s a long season, so as long as we keep it up it’s going to put us in a nice position.”

Unfortunately, the wheels for Grand Rapids would fall off in the extra frame. Just over two minutes in, Joel L’Esperance took his man to the boards, prompting the arm of the referee to come up again. Following the touch up of the puck, Smith in the corner threw a shot at a Marlies player on the ice and was subsequently given a roughing minor of his own.

With a 5-on-3 in overtime, the Griffins penalty killers did what they could, but the result was inevitable. An Alex Steeves shot hit the stanchion behind Brattstrom and popped out to Joey Anderson wide open at the side of the net, who buried the unfortunate bounce for the Marlies to take the extra point in this one by the final of 3-2.

3-2 victory for the Marlies in OT after some late-game heroics by Grand Rapids' Cross Hanas. pic.twitter.com/doKnJIv3dU

“In the overtime, we go and take a tripping penalty because we weren’t in a great spot, and then we take a roughing penalty for punching a guy in the face. That’s just dumb. You can’t just run around and be a complete donkey. We want to play hard and play physical but play between the whistles. Some of our players play that role and you saw us cross that line. As a result, we’re down 3 on 5 in the overtime and really just giving up a point tonight.”

The Griffins are back in action Wednesday morning for a school day game as they host the Rockford IceHogs at 11 A.M. EST.