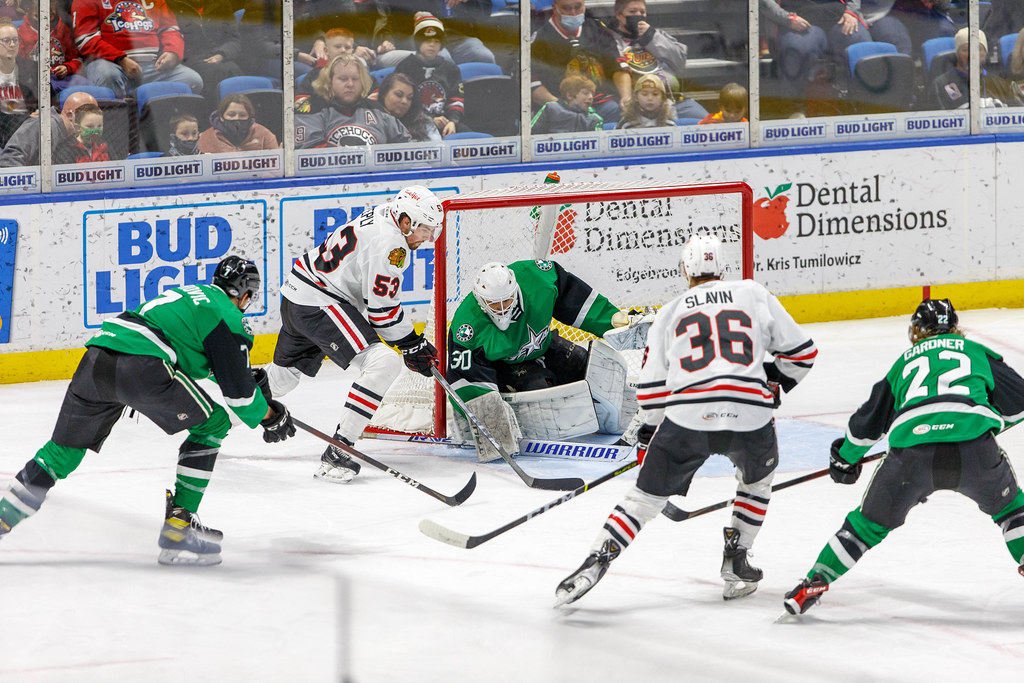 Midway through his second professional season, the Chicago Blackhawks prospect is finally seeing the fruits of his labor.

ROCKFORD, Ill. – Rockford IceHogs forward Michal Teply has gone through a lengthy adjustment to AHL hockey. Midway through his second professional season, the Chicago Blackhawks prospect is finally seeing the fruits of his labor.

It took Teply 34 games over the last two seasons for him to notch his first AHL goal. Since breaking through against the Chicago Wolves on January 7, he’s become quite familiar with the back of opposing nets.

“It was a tough couple of months starting the season. It was a bit of a grind,” Teply told the media Saturday following a two-goal effort in Rockford’s 3-2 shootout win over Texas. “It took time to get used to it, to learn how to play in this league, but now it’s getting better.”

The 20-year-old Teply had both regulation goals for the IceHogs Saturday. He also opened what would be a seven-round shootout with a successful attempt. Over his last seven games, Teply has five goals and three assists for Rockford.

For the Czechia native, this recent tear has come after a frustrating start to his pro career. After the Blackhawks selected him in the fourth round of the 2019 NHL Draft, Teply spent a year with Winnipeg of the WHL. There, he was second on the Ice in scoring with 29 goals and 34 assists (63 points).

Like a lot of standout junior players, Teply was accustomed to playing with the puck on his stick. He spent the 2020-21 season learning the pro game with the IceHogs, where his offensive output amounted to five assists in 18 games.

“I used to play only with the puck,” he explained. “I just waited for teammates and what they’re going to do. Now, I have to work and I have to get open for the chances and for the options for my teammates. It’s just work. Just work hard.”

This season, Teply went scoreless through the first 15 games before picking up an assist on December 17 in a 3-1 win in Texas. For the first three months of the 2021-22 campaign, he was creating scoring chances that failed to pay off in points. His 47 shots are fourth on the team; only recently have his efforts materialized on the score sheet.

Teply totaled three goals for the weekend after picking up a power-play tally Friday in a 5-2 loss to the Stars. That goal saw the 6-foot-3, 187-pounder finish off a nice power move to the front of the Texas net.

He continued to get to the crease Saturday, converting on an Andrei Altybarmakian feed to open Rockford’s scoring. Teply then tied the game midway through the third period by jumping on a rebound of Lukas Reichel‘s attempt. Teply created space in front of the net, fighting off a defender to convert a big power-play goal.

“His play without the puck has been really impressive,” said interim head coach Anders Sorensen after the Hogs broke a three-game skid behind Teply. “As a coach, when you play that hard without the puck and you play the right way defensively, you get trust in him. Then he gets put in a chance to play in a lot of offensive situations. Those abilities, he has naturally. So, you’re really, really proud of him.”

Teply has worked hard for his recent success. He’s hoping that he can keep it going as the IceHogs look to stay in the postseason hunt.

“I learned that the hockey here is not always about the points,” Teply said. “You just have to do the right things, do the little things. If you get the opportunity, you’ve got to take it.”

The ‘Hogs next return to action on Wednesday night, when they host the Iowa Wild to cap off a six-game homestand. Faceoff is set for 7:00 pm CT at the BMO Harris Bank Center.