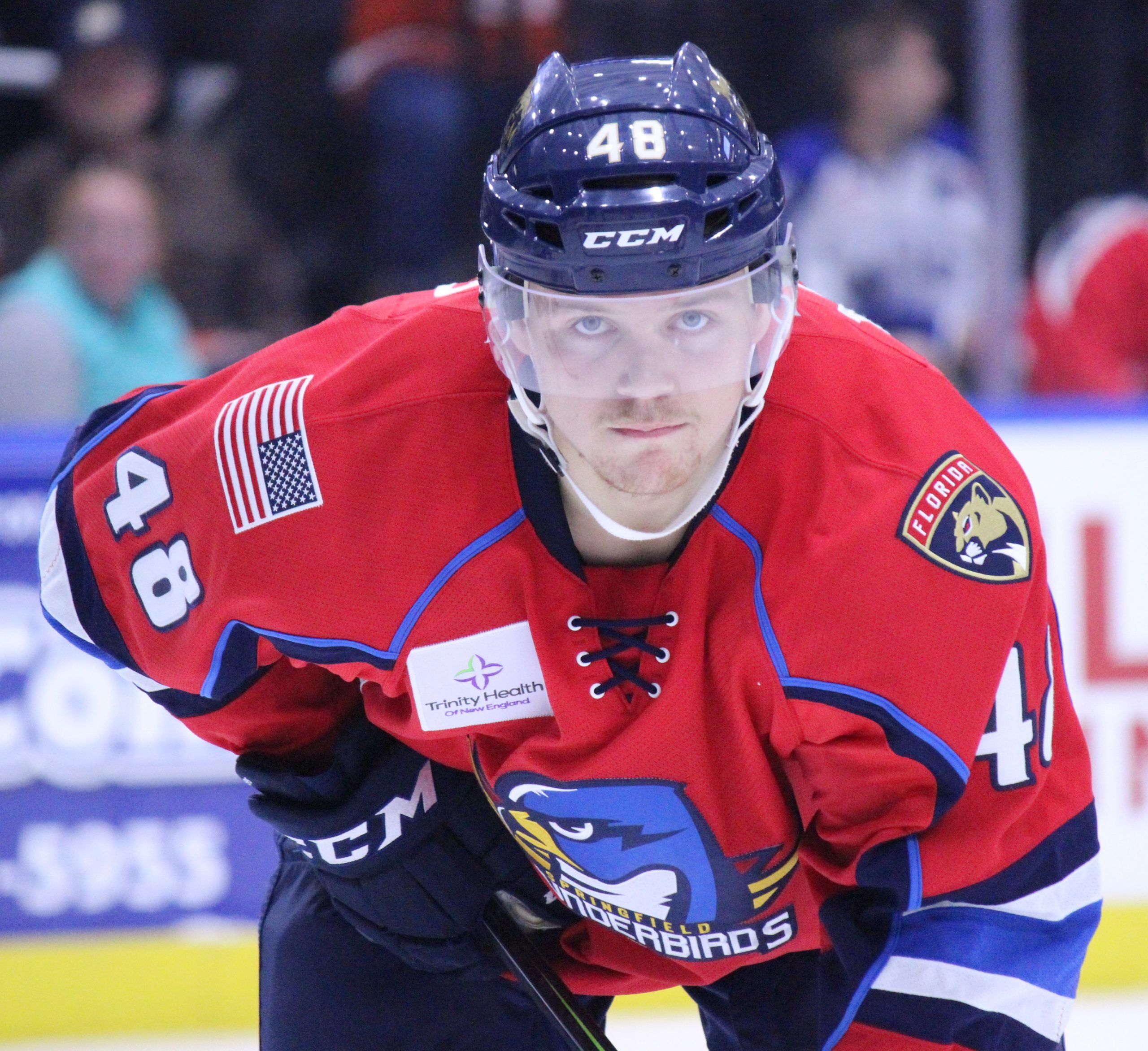 Mikkel Aagaard – A Journey from Pro to University

Forward Mikkel Aagaard finished up his first full year at the University of Guelph this past spring. The Sin Bin’s Sarah Hobday recently spoke with Mikkel about his career path and decision to leave professional hockey for university.

Mikkel Aagaard – A Journey from Pro to University

Forward Mikkel Aagaard finished up his first full year at the University of Guelph this past spring. The Sin Bin’s Sarah Hobday recently spoke with Mikkel about his career path and decision to leave professional hockey for university.

FROM DENMARK TO ONTARIO

Mikkel was born and raised in Denmark. He played hockey for his hometown team in Frederikshavn for five seasons. In December 2013, he was part of the Denmark IIHF World Junior Championship (WJC) team that won Division 1 – Group A to move up to the top tier of WJC in 2014. In the summer of 2014, he was selected by the Niagara IceDogs in the Canadian Hockey League (CHL) Import Draft. Aagaard, 19, joined the IceDogs of the Ontario Hockey League (OHL) for the 2014-15 season. In his first season in North America he put up 47 points (19G, 28A) in 70 total games between the regular season and playoffs. Mikkel also served as the Captain for Team Denmark in the WJC in December 2014 in Toronto.

Aagaard returned to Niagara for the 2015-16 season. After 20 games, he was traded to the Sudbury Wolves. Following another successful season with 53 points (24G, 29A) in 64 games, he joined Team Denmark for the IIHF World Championship in May.

OHL teams cover educational costs for their players as part of the OHL Scholarship Program, where players can take university courses while playing in the OHL. After leaving the league, the program will pay for tuition, books, and fees toward an undergraduate degree for each season played in the OHL. Some scholarships include paying for room and board, as well. The OHL facilitated scholarships for 321 OHL graduates at 62 different academic institutions with a total scholarship payment over $3,210,000 for the 2017-18 season. Players from the CHL are not eligible for NCAA hockey, but can compete for Canadian universities (U SPORTS). OHL graduates can chose to play professional hockey for up to 18 months before accepting their OHL scholarship.

While in the OHL, Aagaard took several university courses. Upon leaving Sudbury, he was unsure about going to university full-time just yet.

“I looked at going to university out of the OHL. But I had an offer from Calgary to come to Young Stars and camp. They wanted me as a piece of their system and said they had a plan for me.”

The Young Stars Classic took place in Penticton, BC for the prospects of the Calgary Flames, Vancouver Canucks, Edmonton Oilers, and Winnipeg Jets to compete in a round-robin tournament. Mikkel was invited to the Flames main training camp after his strong showing at Young Stars. Once cut from Calgary, he headed to their AHL affiliate training camp. A week later, Aagaard signed an AHL contract with the Stockton Heat.

Mikkel began the 2016-17 season with the Adirondack Thunder, then the Flames’ ECHL affiliate. I happened to be in Manchester for opening night on October 14 to see him in his first pro game in North America. Adirondack won 4-3 in the shootout (Aagaard was the second shooter, but was denied). The next night, Mikkel scored a goal and had two assists in their win over Manchester. That was the start of showing his scoring touch in the ECHL; in 38 games with Adirondack, he had 39 points (13G, 26A). 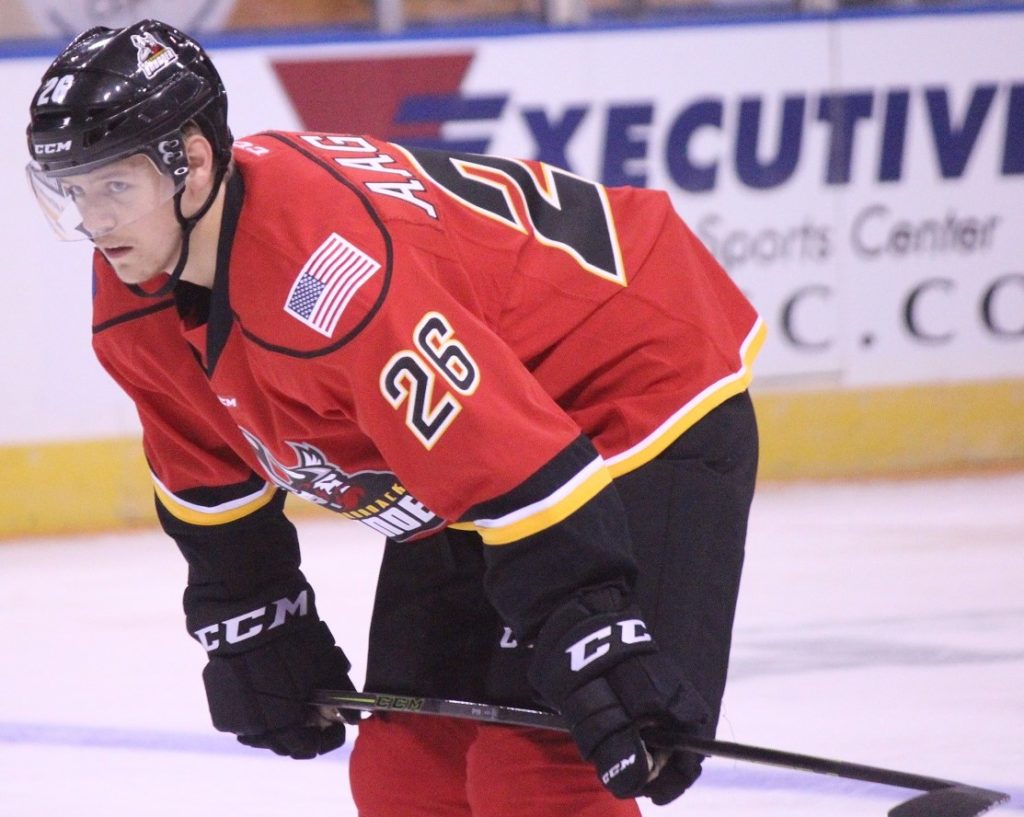 “[Scoring] came naturally. I was fortunate to get on a top spot and had great chemistry with my linemates. Everything clicked from the second I got there.” 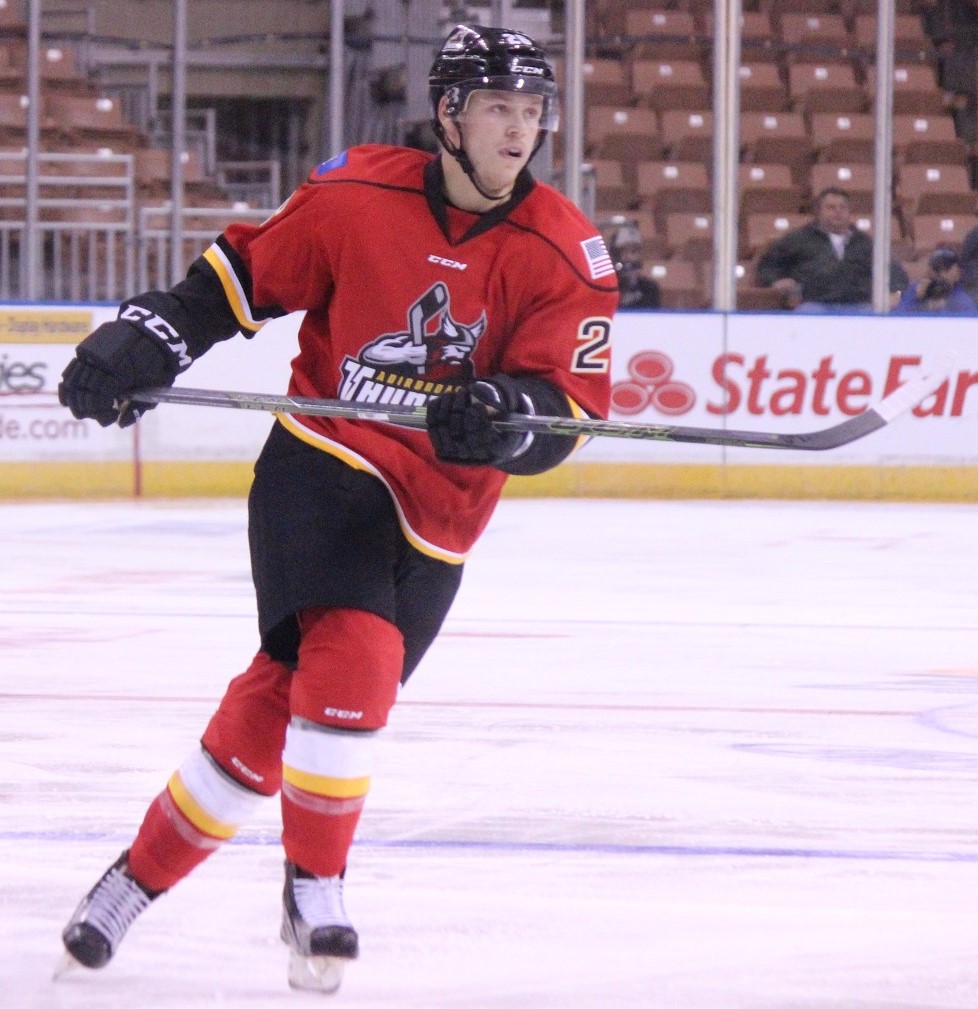 When asked what the biggest differences were in his jump from the OHL to ECHL, both on and off the ice, he responded:

“[In the OHL], you’re Coming from living with a billet family, with everything taken care of for you. Going pro, [you’re] living with a roomie and having to deal with everything yourself, like laundry and cooking. On the ice, there were lots of games in the ECHL, so you’re always focused on the next games. You go from playing against kids to men of all ages.”

OFF TO THE AHL

After Aagaard’s hot start in the ECHL, he was called up to Stockton where he finished the season with 25 regular season and four playoff games. In Stockton, he scored another 12 points (5G, 7A). Shortly after Mikkel’s season ended with Stockton, he was summoned to join Team Denmark for the IIHF World Championship. Then, Aagaard went home for the summer to train and see where the following season would bring him. 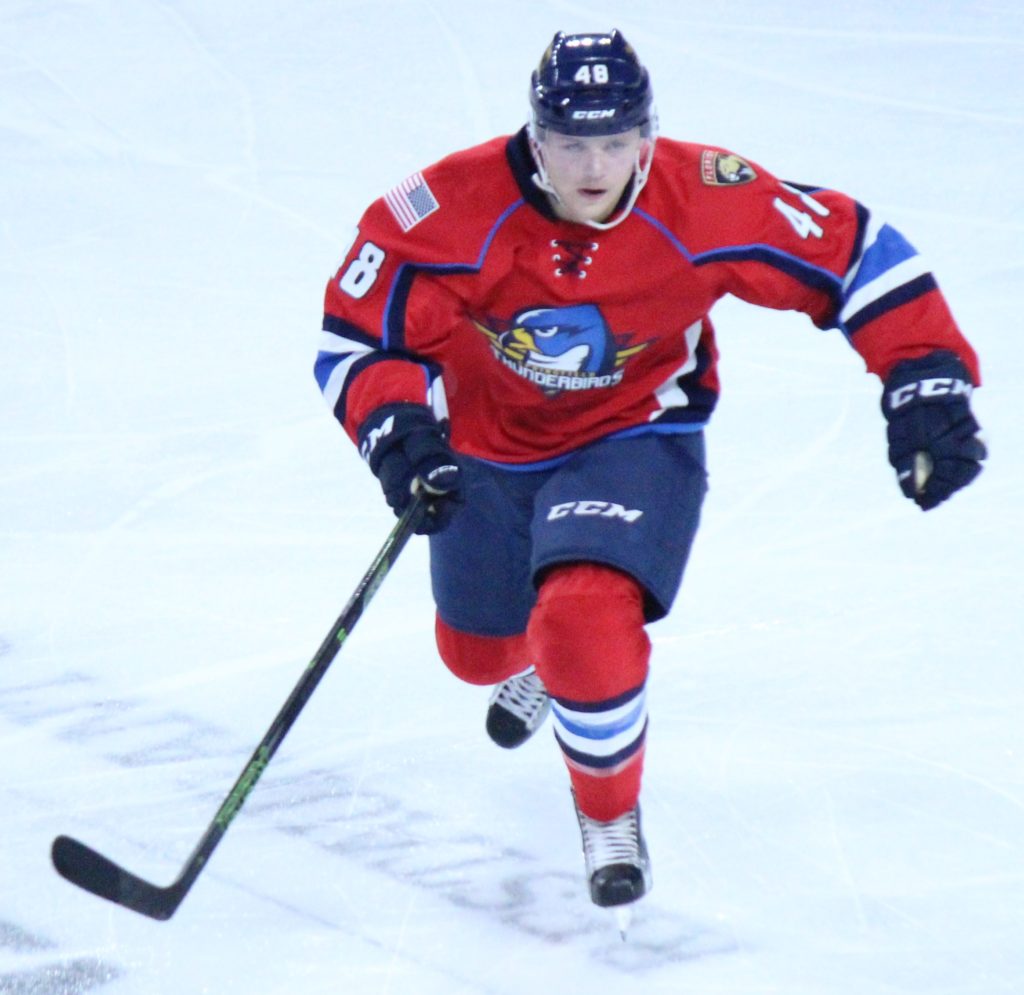 In early October 2017, he signed an AHL deal with the Springfield Thunderbirds. Aagaard spent the first part of the season in Springfield but was not as offensively productive as in Stockton. He was sent down to the ECHL’s Manchester Monarchs for 18 games before being called back up to Springfield. 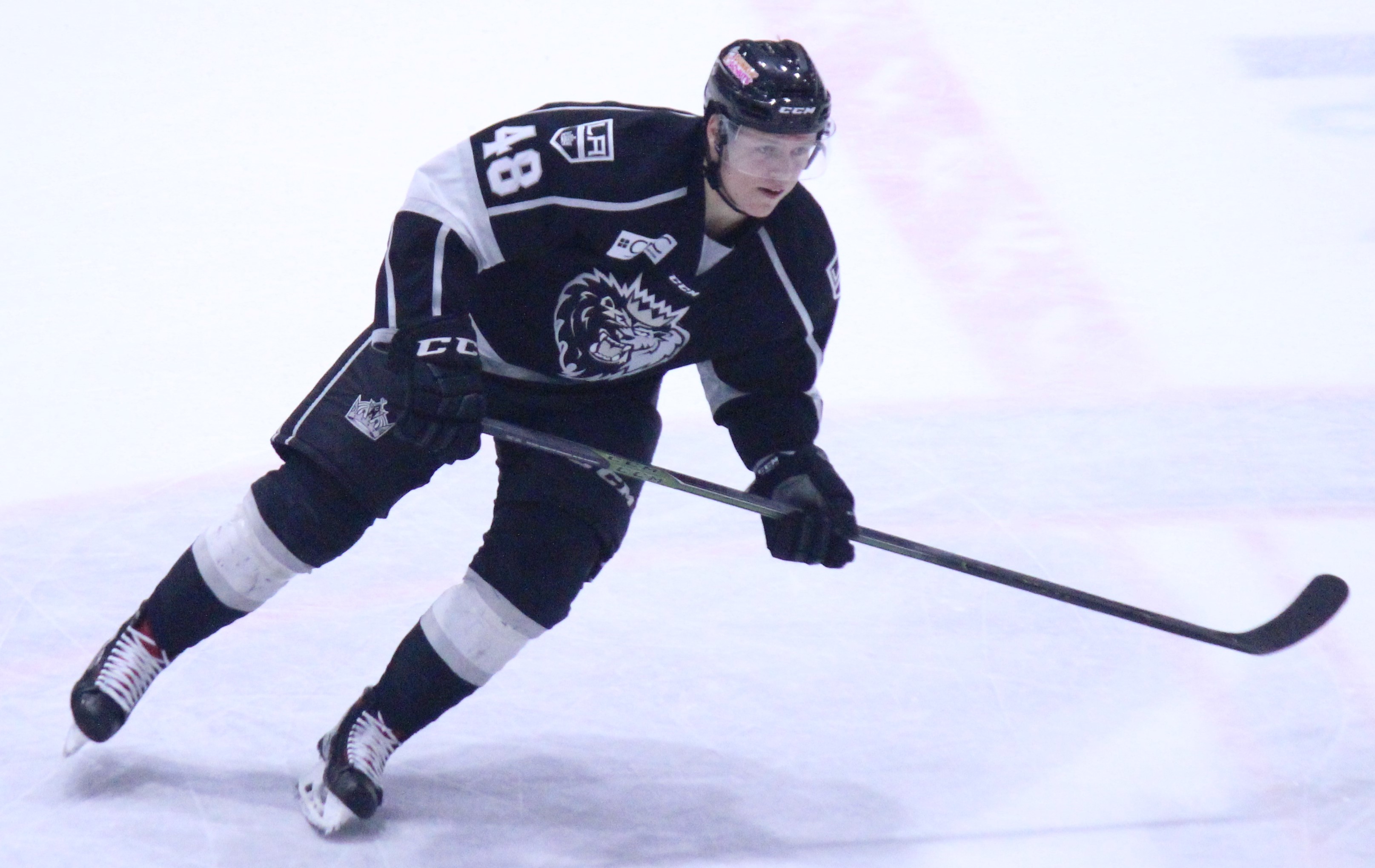 He talked about the differences between the divisions from playing with Stockton and later Springfield.

“It’s different in the refereeing. [You’re] allowed more on the west than the east with physicality. It was a lot of hard work in Stockton. The east was more skilled than the west.”

In January 2018, Mikkel had a decision to make. His deadline for accepting his OHL scholarship package was soon approaching. If he left pro hockey before January 31, 2018, he could use that scholarship to attend university. Aagaard decided to leave Springfield in order to attend the University of Guelph. The Thunderbirds then terminated his contract.

“I got a big school package to go to university in Canada. So, I could combine hockey and school. I had a feeling of needing something more in life than pro hockey, with just coming home and all the free time. I did some [university] classes while in the OHL and ECHL, so I already had some credits.”

Mikkel liked having that 18-month window of being a pro before having to make the decision on if to accept his scholarship package.

A YEAR WITHOUT GAMES

Due to his time in pro hockey, Aagaard was not eligible to begin playing games with the Guelph Gryphons for a full calendar year. But during that time, he fully participated in team practices, workouts, and other events along with his schoolwork. Mikkel spent additional time practicing on the ice with scratches and some alone skill work with the coach – all to help stay in game shape. Asked if he found it difficult to not play games for a full year, Aagaard credits his coach in helping make the time off easier:

“[It was] hard to be around the team when they’re playing…Not really feeling like part of the team while not playing. I had a good chat with the coach about that.”

On the other hand, he spoke about how the break from games allowed him to concentrate on school work instead of games.

“It was a helpful break. I could fully focus on school with no pressure of games. I finished school with over 80 average [so proud of that].” 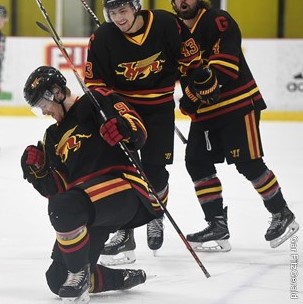 Mikkel was finally able to suit up with the Gryphons for the final four games of the regular season and then for nine games in the playoffs. On March 4, 2019 he was named Gryphon Athlete of the Week after putting up six points (5G, 1A) in the three-game Ontario University Athletics (OUA) semifinal series against the Western Mustangs. The series was tied 1-1 going into game three. Aagard scored the game winning goal in the second overtime period to push the Gryphons to win the series.
With the series win, the Gryphons moved on to the OUA championship game in hopes of winning the Queen’s Cup. Unfortunately, the Gryphons lost the championship game to the Queen’s Gaels. Interesting note – the Queen’s Cup was first awarded in 1903 and is the second-oldest ice hockey trophy still being awarded, after the Stanley Cup.

Mikkel only registered one point in four regular season games and then went on a tear in the playoffs with 16 points (8G, 8A) in just nine games. He certainly found his groove at the right time.

“It took me a couple games to get into game shape. I had opportunities, but kept hitting posts or coming close. The hockey gods weren’t with me [in those first games back].”

In playoffs, it all clicked for him.

“Playoffs were super awesome and exciting. The team really came together, A great experience for all of us. We lost game one [against Western] and came back to win the next two [for the series win].”

Aagaard spoke about how he is enjoying his time with the Gryphons, as well as the similarities and differences between pro and university hockey.

“I’m super happy with the change from pro to university. It is a change for the better. The hockey isn’t as good in university versus the AHL. But, I have a much bigger role on the team now versus being on the third line in the AHL. I have more ice time and more trust from the coach.”

On the number of games played versus practice time:

“Lots of games as a pro and less practices. I miss the ability to redeem yourself quickly after one bad game so you can make up for it the next night.”

Some final thoughts on the differing hockey life between his professional and collegiate careers:

“On-ice and gym time is completely the same from university to pro. Though around exams, we have no games and take time off from practices to concentrate on school. Video work is just like when I was a pro.”

PREPPING FOR LIFE AFTER HOCKEY

Aagaard put it very well when he spoke about his choice to go to university.

“[It] was a step in a different direction – not a step down. It’s not that I’m not good enough for pro hockey. I’m glad to combine school and hockey at the moment.”

Even at just 23 years old, Mikkel has a wealth of experience with his career in juniors, international competition, pro, and now university hockey. He has a good head on his shoulders in knowing what he wants out of hockey and life, creating a plan for life after hockey. The summer of 2020 will bring another decision – continue his degree full-time in Guelph or make the jump back into pro hockey.

During the regular season, you can find Sarah behind the lens of a camera shooting games at the AHL, ECHL, and SPHL levels (check out her work on Twitter and Facebook). During the offseason, she keeps hockey at the forefront with feature interview articles like these. Stay tuned for more fascinating stories from The Sin Bin!