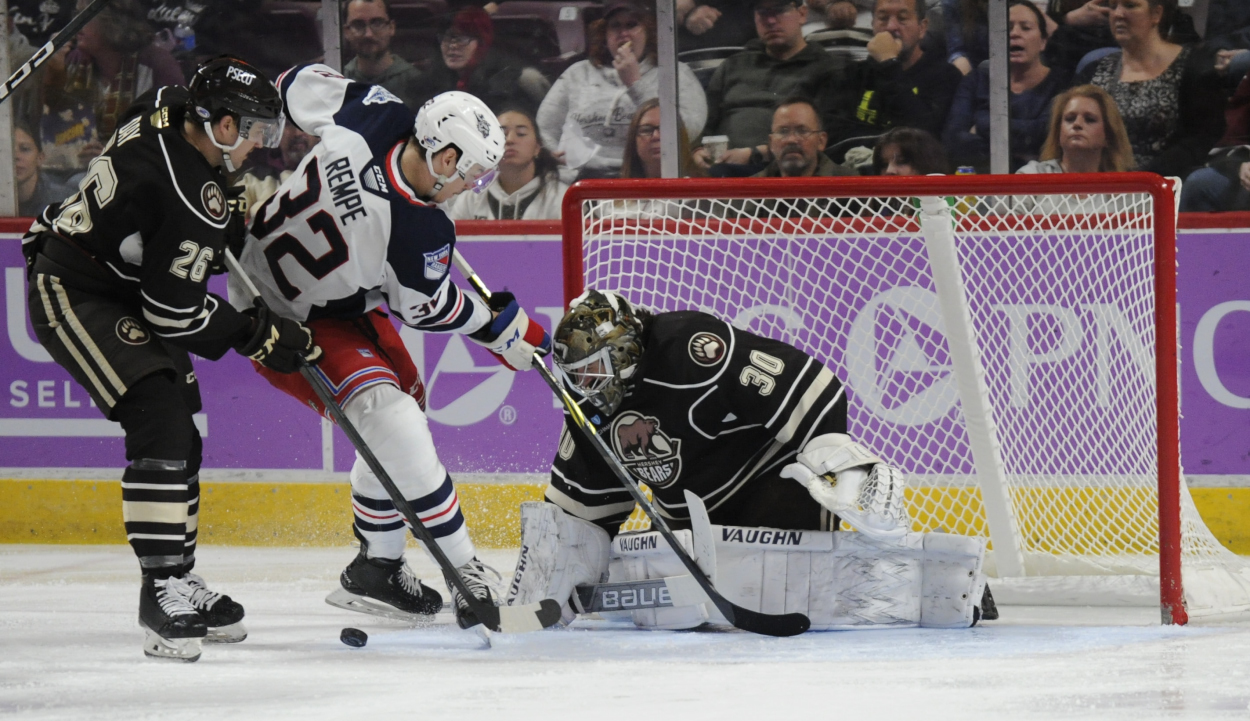 HERSHEY, Pa. – Any time a team is shut out in the highly competitive American Hockey League, it begs the question of whether it’s a one-off or the start of a trend. According to Hershey Bears head coach Todd Nelson, it felt like a case of the former as the Bears were held off the score sheet on Friday for the first time this season. It seemed as though the Bears decided to fill the score sheet in the friendly confines of the Giant Center on Saturday, where the Chocolate and White have enjoyed a lot of success so far this season by tallying six goals for a 6-1 win over the Hartford Wolf Pack. Hunter Shepard earned his third straight win with 18 saves while Louis Domingue suffered the loss in a shared game with Dylan Garand with each goaltender surrendering three goals on 32 shots.

The Bears did all their damage in the first 40 minutes of action just over halfway into the first when Mason Morelli jammed his second goal of the season. Garrett Pilon wrapped the puck around behind the net that got tied up in the right skate of Domingue, and Morelli was there to push the puck and the goaltender’s skate over the line before the net became dislodged. The play went to review where it was determined to be a good goal despite the protests of Domingue. Hershey doubled their lead late when Henrik Borgstrom scored his third goal of the season on a wicked wrist shot for his first goal in about a month.

Hershey did a lot of damage in the final minutes of the first two frames, but the team’s third goal was a lesson in perseverance. On an offensive zone faceoff with eight seconds to play in the period, the Bears won the faceoff and went to work in the zone with Morelli getting the puck to Pilon, who drove to the net and beat Domingue up over the shoulder to extend the lead. The trio of Morelli, Borgstrom, and Pilon did the damage in the opening stanza with each player recording a goal and an assist through twenty minutes of action.

The Bears made mention of a milestone in the making for forward Sam Anas, who entered the night one goal away from 100 in his American Hockey League career after scoring his most recent tally a week ago against Laval. Anas continues to heat up for the Bears, tallying a goal and an assist tonight and chalking up five points in his last five games to move into fourth on the team in scoring. Hershey had the only two power plays of Saturday’s tilt and cashed in with Mike Sgarbossa feeding Mike Vecchione for his fourth goal of the season on a pretty backdoor pass.

Hartford got on the board with Andy Welinski’s second goal of the season, a pretty wrist shot through some traffic. It unfortunately did little to stem the tide as Hendrix Lapierre tallied a goal in the last minute of the second period. Dylan McIlrath took a shot from the right point, and the rebound fell across the crease to Lapierre. Despite a valiant effort from Garand to stop the puck with his stick, he did so on the wrong side of the goal line which stood up after review for the second period in a row to cap the scoring at 6-1.

Six different goal scorers, a 6-1 win over the Wolf Pack, and an 8-0-1-0 record on home ice this season. Relive all the highlights from tonight's big victory. pic.twitter.com/5DNAhfKAqd

“It was a good bounce-back game for us tonight,” Nelson said after the game. “Last night, I don’t think we were terrible by any stretch. It was a closer game than 4-0, but we were a bit sloppy last night and I thought tonight we executed a lot better, I thought we played our system a lot better. That’s a tough team to play against, the score doesn’t indicate [that] we had a couple of breaks. They’re a hard forechecking team and they forechecked us really hard in the first period, we got a couple of breaks, got up 3-0, and went on from there.”

Nelson had some good news to pass along as Pilon missed the third period after crashing hard into the boards and was helped to the locker room. Pilon’s injury was not as serious as it seemed at the time, according to Nelson, and will be re-evaluated on Sunday. Nelson made mention that a few players were banged up, and it remains to be seen if it’ll impact the team’s lineup for the rematch between the two teams at Giant Center on Sunday afternoon for a 4:30 PM EST puck drop on Hockey Fights Cancer Night for the team.