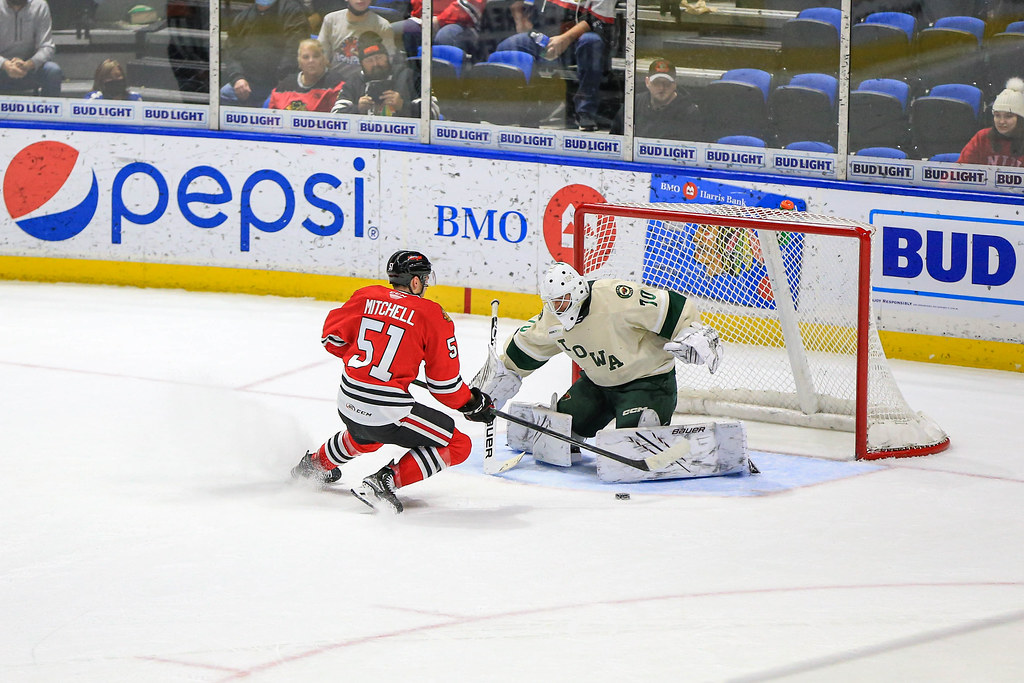 ROCKFORD, Ill.– Defenseman Ian Mitchell turned in a clutch performance for the Rockford IceHogs Tuesday night, leading his team to its third straight victory. Mitchell forced overtime at the BMO Harris Bank Center with a late goal, then found the net in the third round of the shootout. Rockford treated the home crowd to a 3-2 comeback win.

The IceHogs (20-16-3-1) moved into fourth place in the Central Division with their second-straight shootout triumph. Mitchell’s heroics spoiled a fine effort in goal by the Wild’s Zane McIntyre, who stopped 32 shots on the evening.

McIntyre and Hogs goalie Arvid Soderblom (23 saves) were both on top of their games Tuesday. It came down to the lone shootout goal as both teams struggled to put up much offense.

Rockford opened the scoring when defenseman Jakub Galvas pinched into the slot to accept a pass from Carson Gicewicz. Galvas roofed the puck over McIntyre’s glove 15:20 into the contest.

The Wild responded midway through the second period while on a delayed penalty. Andrei Altybarmakian hooked Iowa’s Mason Shaw in the Hogs zone. After gaining an extra attacker, Brenden Miller sent his first goal of the season past Soderblom to tie the game at the 10:18 mark.

As the clock began to wind down, it appeared that the game-winner would be Joseph Cramarossa‘s shorthanded tally five minutes into the final frame. The former IceHogs forward took advantage of Alec Regula losing his footing at the Iowa blueline, breaking free and five-holing Soderblom at the other end.

Rockford head coach Anders Sorensen brought his goalie to the bench with well over three minutes remaining in regulation. After calling the timeout, the IceHogs Michal Teply won a faceoff at the right dot. Regula gained control of the puck and slid it across the ice to Mitchell for the one-timer that caught the back of the net with 2:58 left.

The goalies continued to be stingy in the extra session, forcing the game to be decided by penalty shots. McIntyre stopped Teply and Lukas Reichel before surrendering Mitchell’s game-winner. Soderblom denied Cramarossa and Marco Rossi before ending the game with a stop of Kyle Rau‘s attempt.

The IceHogs don’t have to wait long before going for a fourth-straight win; Rockford visits Milwaukee Wednesday night. Iowa takes a few days off before heading into Rosemont Saturday for the first of two games with the Chicago Wolves.