After starting the season red hot, hard times have befallen the South Carolina Stingrays. In their last ten games, South Carolina has won just once with a record of 1-6-3-0 and is on an eight-game winless skid.

What is surprising is that the Stingrays came into the season with a loaded offense, featuring players such as Dan DeSalvo, Mark Cooper, Cole Ully, and Andrew Cherniwchan. Despite the slide, head coach Ryan Blair tells The Sin Bin his group remains confident:

“They’ve come in and they’ve continues to be energetic, passionate, and eager to learn and get better. That’s a good sign. Obviously, you never want to be hitting this struggle but we’re positive with our outlook that we’ll be better because of it. We’ve got a great locker room with some great character players and leadership in there. We’re just in a rough spot and we’ll dig out of it. We have a really good room and a room that believes in themselves and believes in what we’re trying to do here,” Blair said.

South Carolina runs into the buzzsaw that is the Florida Everblades this weekend, with a three-game set at Hertz Arena.

One of the turnaround stories in the ECHL this year can be found in Wichita, where the Thunder leads the Western Conference with a .727 points percentage and have a 15-5-2-0 record. By comparison, through 22 games last season, the Thunder were 9-9-4-0.

While some teams have had contracted players on their rosters, the Thunder currently have no NHL/AHL contracted players on the roster. One thing head coach Bruce Ramsay shrewdly did in the offseason was bring back a solid core of his club, players that are leaders in the locker room and can share his system details with other players. The upshot to that is the Thunder hit the ground running, with little time needed for meshing that some teams have had. Matteo Gennaro, Stefan Fournier, and Anthony Beauregard are all among league leaders for goals, assists, and points. In net, Evan Weninger has filled the shoes left behind from Mitch Gillam‘s injury and is third in wins (8), third in save percentage (.927), and seventh in goals against average (2.49).

If the Thunder are able to receive any players from either Bakersfield or Toronto, it will only add to the potential this club has to be near the top of the league through the season. The long-starved Thunder fanbase deserves a winner, hopefully, this is the year.

The Brampton Beast ceased operations last week. Our friend, Barry Janssen, who runs the @ECHLStats account on Twitter looks at their all-time leaders:

The Brampton Beast have ceased operations. A tribute to their all-time leaders:

Zach Pochiro (Fort Wayne): The fifth-year forward is on a heater to begin the Komets’ abbreviated season. He scored five goals this weekend on nine shots (55.6% shooting percentage) and has goals in six of his five games this season. For his ECHL career, the former St. Louis Blues draft pick has 162 points (70G, 92A) in 213 regular-season games.

The Sin Bin’s Goalie(s) of the Week:

Dan Bakala and Billy Christopoulos (Indy): The two netminders held the Swamp Rabbits off the scoreboard in the final 128:30 of their three-game series this weekend. The back-to-back shutouts were the first of the season for each netminder.

Bakala leads the ECHL with ten wins, is fourth in the league with a 2.12 goals against average, and fourth in save percentage (.926). 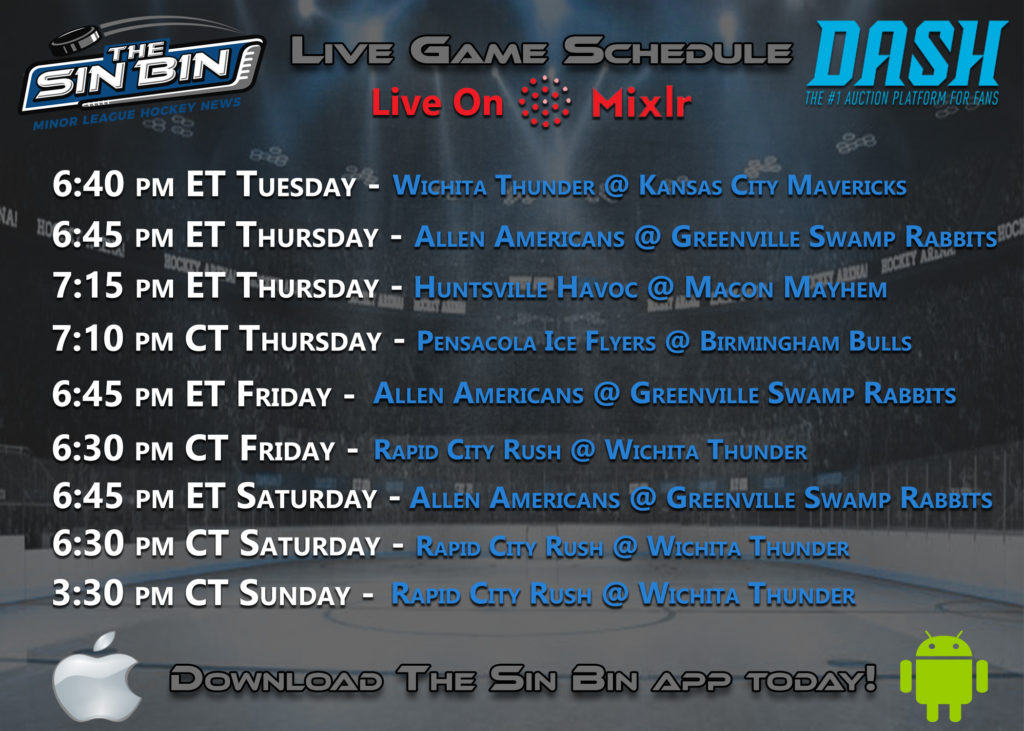